The House Votes To Remove Confederate Statues In The U.S. Capitol 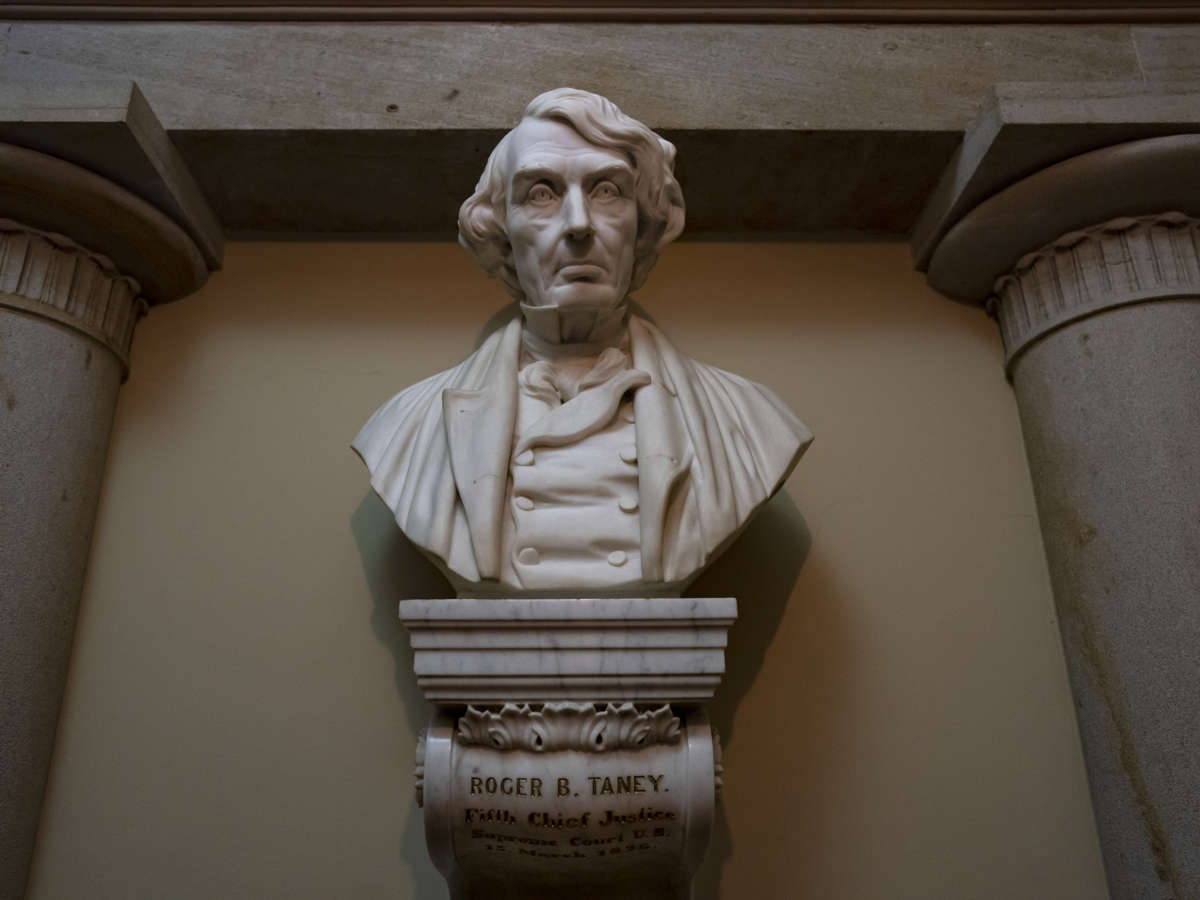 This file photo shows the marble bust of Chief Justice Roger Taney that is currently displayed in the Old Supreme Court Chamber in the U.S. Capitol. The House voted Tuesday on a bill that would remove the bust from public display.
Image credit: J. Scott Applewhite

The House of Representatives on Tuesday voted to remove all Confederate statues from public display in the U.S. Capitol, along with replacing the bust of former Chief Justice of the United States Roger Taney, author of the 1857 Dred Scott decision that declared that people of African descent were not U.S. citizens.

The House passed the measure 285-120. All Democratic members supported the legislation; all ‘no’ votes came from Republican members.

“My ancestors built this building,” Rep. Karen Bass, D-Calif., said in passionate remarks on the House floor ahead of the vote. “Imagine how they would feel, knowing that more than 100 years after slavery was abolished in this country, we still paid homage to the very people that betrayed this country in order to keep my ancestors enslaved.”

The legislation, H.R.3005, would direct the architect of the Capitol to identify and remove all statues and busts that depict members of the Confederacy from public display within 45 days of the resolution’s enactment. Any removed statue that was provided to the Capitol by a state would be returned to the state, which could then elect to replace it with another honoree.

Among the Confederate statues, there is a statue of Jefferson Davis, president of the Confederacy, displayed in Statuary Hall.

“The halls of Congress are the very heart of our democracy,” House Speaker Nancy Pelosi, D-Calif., said on the floor ahead of the vote. “The statues that we display should embody our highest ideals as Americans, expressing who we are and who we aspire to be as a nation. Monuments to men, or people who advocated cruelty and barbarism to achieve such a plainly racist end are a grotesque affront to those ideals.”

The legislation also calls for the removal of the bust of Taney, author of the Dred Scott decision, which declared that Black Americans weren’t citizens of the U.S. and thus couldn’t sue in federal courts. The decision also claimed that Congress didn’t have the authority to prohibit slavery in U.S. territories. The legislation calls for the bust to be replaced with one of Thurgood Marshall, the first Black Supreme Court Justice.

“While the removal of Chief Justice Roger Brooke Taney’s bust from the United States Capitol does not relieve the Congress of the historical wrongs it committed to protect the institution of slavery, it expresses Congress’s recognition of one of the most notorious wrongs to have ever taken place in one of its rooms, that of Chief Justice Roger Brooke Taney’s Dred Scott v. Sandford decision,” the legislation reads.

A statue of Taney in on the grounds of the Maryland State House was removed in 2017 after standing for nearly 145 years. Maryland Gov. Larry Hogan, a Republican, said at the time it is “the right thing to do.”

House Minority Leader Kevin McCarthy, R-Calif., used his debate time Wednesday to condemn critical race theory, a scholarly approach to studying American institutions through the lens of race and racism that has been rebranded by many Republicans as a stand-in for any conversation about race or the role racism continues to play in American society. McCarthy said he supports the removal of Confederate statues and repeatedly noted that the racist lawmakers and leaders they depict were then members of the Democratic Party.

Other Republican lawmakers noted their support for the removal of statues but also their frustration over the legislative process.

“My opposition to this bill isn’t because of the goal that we’re trying to achieve, but it’s the way that the majority continues to skirt procedure in this body,” said Rep. Barry Loudermilk, R-Ga. “For the second consecutive Congress, this bill was rushed to the floor without a hearing or a markup in the Committee on House Administration.”

Several Republicans made similar process complaints about the legislation that established Juneteenth as an official public holiday.

Alabama Republican Rep. Mo Brooks previewed his ‘no’ vote on the bill in a statement decrying “cancel culture and historical revisionism.”

“I support federalism and a state’s right to decide for itself who it should honor. As such, I will proudly vote ‘No’ on H.R. 3005. Alabama, not New Yorkers, Californians, or anyone else, should decide who we wish to honor in Alabama’s contribution to the National Statuary Collection,” the statement read.

Tuesday’s vote comes nearly a year after the House approved a similar resolution with support from 72 Republicans, and which ultimately stalled without support from Senate Republicans.