The Hope And Hype Of Diabetic Alert Dogs 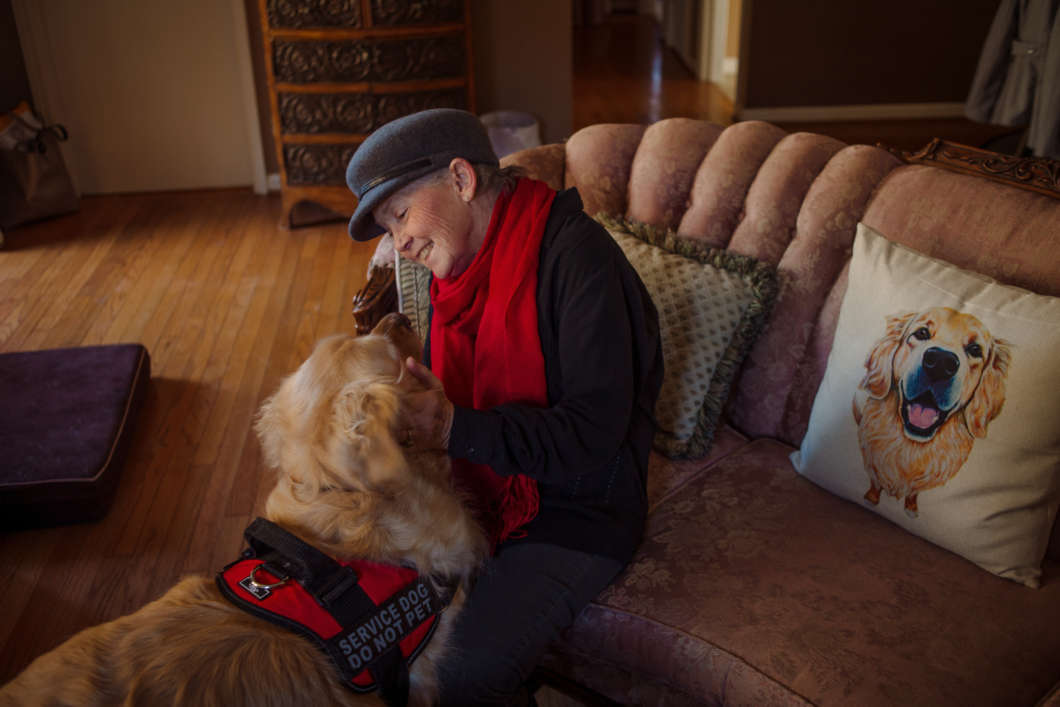 It’s a few minutes before services on a Sunday morning at Bethany United Methodist Church in West Jefferson, N.C. The handbell choir warms up and an acolyte lights candles.

“How are you? You’re a sweetheart,” one man says to the dog. “And so are you,” the man tells Gibson.

Pastor Dan Money welcomes the congregation as Rocky, an honorary church member, settles in at Gibson’s feet in a pew near the back.

“We love Rocky, right? And we love Peggy,” Money says from the pulpit on the day NPR visited.

Gibson, a 67-year-old retired nurse, is one of more than a million Americans with Type 1 diabetes, a difficult-to-manage autoimmune disease. People with the disease face a constant struggle to control the amount of sugar in their bloodstream. If it gets too low, it can lead to seizures, loss of consciousness, or death.

And Rocky was there to help. He’s a diabetic alert dog specially trained to smell dangerous changes in someone’s blood sugar and alert them with a paw or a nudge before it becomes a medical emergency, and he was a gift from the church community. A chili lunch, a silent auction, even a concert by local musicians all helped with his $15,000 price tag.

Back at her home just outside West Jefferson’s picture postcard downtown, Gibson talked about why she sought canine help.

“In these senior years, it became harder to recognize whether my blood sugar was going too high or whether it was going too low. That was partly what prompted me to look into getting a diabetic alert service dog,” she says.

But while Gibson obviously loves Rocky, he doesn’t provide the service she and her neighbors paid for. Unfortunately, that may be par for the course. The diabetic alert dog industry is unstandardized and largely unregulated. And the science on a dog’s ability to reliably sniff out blood sugar changes is, at best, inconclusive.

Gibson says she was influenced by the online marketing campaign of Diabetic Alert Dogs of America, the Nevada company that sold Rocky.

“They have their stories on there about the dogs they’ve trained and the people they’ve placed them with. And, you know, it [seemed] sound to me,” Gibson says.

If you research diabetic alert dogs, you’ll find a lot of hope for their role in managing Type 1 diabetes. And you’ll find a fair amount of hype.

Television news stories about the dogs often uncritically accept their abilities, using words like “incredible” and “amazing.” In fundraising campaigns, would-be alert dog owners position them as critical solutions to their disease.

In Texas, a group of more than a dozen dog buyers sued a trainer for fraud and won a judgment for $800,000. In Virginia, the attorney general sued a service dog vendor after customer complaints about its dogs, which were marketed as “backed by science” and “100 percent effective.”

The Virginia attorney general claimed that the company, Service Dogs By Warren Retrievers, deceived consumers about the animals’ abilities and cost, in many cases simply selling “a $25,000 pet.” Company lawyer Glen Franklin Koontz tells NPR his client denies the allegations and calls the lawsuit “baseless.” He stands by the “backed by science” claim and adds: “A fully trained dog is 100 percent effective.”

The reason it might take a lawsuit to fight back against perceived or actual shortcomings in an alert dog is that trainers and dogs generally aren’t required by any authority or regulator to perform to any particular standards.

While Rocky was marketed as a “certified” alert dog, the certification came only from the company that sold the dog. Soon after Gibson got Rocky, it was clear to her that he wasn’t cut out to be a service dog in public, especially in the windy high country of North Carolina.

Gibson says Rocky is easily frightened by common noises such as umbrellas opening and motorcycles passing, and can’t work as an alert dog while he’s scared.

“The first day that I had him out on my own, the wind blew up. He got so scared that he couldn’t run fast enough to try to hide,” Gibson says. “It was just pure fear.”

That was in April 2017, right after she had to sign a series of disclaimers as a condition of getting the dog. One document said Rocky “met her expectations as a diabetic alert dog,” even though she had only two days’ experience with him.

Another document said Rocky has a “free will” and wasn’t guaranteed to do what Gibson and her community paid $15,000 for: alert her to blood sugar changes.

“I answered everything because I was so excited that he was there and I was positive,” Gibson says. “I was hoping everything was going to be wonderful and then after the dust settled, everything wasn’t wonderful.”

The sweeping disclaimer might sound at odds with an expensive purchase that people trust with their lives. But research on alert dogs suggests it might also be a reality check about the abilities of diabetic alert dogs in general.

What the science says

University of Virginia psychologist Linda Gonder-Frederick tracked the performance of 14 diabetic alert dogs in a 2017 study. Before the study, their owners believed the dogs would prove more accurate than their glucose monitor devices. That didn’t happen.

“Overall, they really were not that reliable or accurate,” she says.

Gonder-Frederick says some dog owners overestimate their beloved dogs’ talents, perhaps as they would a favored grandchild.

The psychological process at work, she says, is a kind of confirmation bias.

Her research also contradicted what some believe — or hope — is true: That the dogs can be a good safety net for those who worry about blood sugar dropping as they sleep. Some parents have turned to the dogs to safeguard their children during the night.

“The accuracy just plummeted during the night. Dogs have to sleep too. Obviously, a dog cannot work 24/7,” Gonder-Frederick says.

There’s not too much other research, but what does exist isn’t more encouraging. A study published in 2015 and a 2019 British study did find good performance but involved possible conflicts of interest. Both studies were co-written by the dogs’ trainers or suppliers. Authors of both articles tell NPR the arrangements did not amount to conflicts and didn’t bias the studies.

Edwin Peeples, who co-owns Diabetic Alert Dogs of America, says he has trained nearly 700 dogs and more than 9 out of 10 of his clients are satisfied.

He says issues like Gibson’s — where a dog can’t perform well in public — represent the toughest part of training an alert dog, and that he does his best to train the dog to work in the owner’s environment. And for dogs that don’t work out, Peeples says he has a training guarantee.

“They can bring that dog to my doorstep right here in Las Vegas,” Peeples says. “Our response will be: I will do my absolute best to try to fix it, and if I can’t, you get a brand-new dog.”

But Jessica Moye, an Ohio mom with Type 1 diabetes, had a long-running dispute with Peeples and now helps run a Facebook group dedicated to complaints about Peeples’ company. She says the replacement dog guarantee can mean little when there’s a child involved.

“The child bonds with the dog, and then they have to choose whether or not to send the dog back and start over again, looking for that lifesaving alert,” Moye says. “Or if they just let their child go on with life with this dog, regardless of the fact that it isn’t working for them.”

When Peeples agreed to refund some of her money, it was conditioned on her signing a nondisclosure agreement barring her from discussing the company with others. He says he required the agreement because he didn’t want it publicly known that he was providing a refund. She refused to sign, leaving several thousand dollars on the table.

Now, through the Facebook group, Moye says she’s heard from dozens of Peeples’ clients. Some have struggled with dogs that are too aggressive or have other problems. Some are happy.

While researchers have found little evidence that dogs can reliably sniff out blood sugar changes, they have encountered a kind of paradox: People who get alert dogs tend to do better with their diabetes.

“They may just be more engaged with their diabetes,” says Gonder-Frederick, the researcher. “They may be checking their blood glucose much more often than they used to. The dog is sort of a pleasant reminder of diabetes.”

Sitting at her kitchen table with Rocky at her feet, Gibson says the dog has helped her feel less alone with her disease.

That’s despite the fact that, she says, he doesn’t work well when he’s scared from a thunderstorm or some other noise, and doesn’t alert her to blood-sugar changes at the rate she says the vendor promised – 80 percent of the time. Also, she complains that he was trained to alert her by jumping on her, and she says he’s more than half her weight.

Still, Gibson says: “There will be just times that he’ll come and put his head on my leg and just look up at me, — as if he understands in some way what I’m going through. He’s always there for me.”

But, she says, “I felt sorry that Rocky as an animal was chosen to do a job he wasn’t equipped to do. That’s not fair to the animal. Neither is it fair to me as the recipient of a $15,000 specially trained dog that isn’t capable of doing his job.”

She says she plans to try to retrain Rocky herself, and despite his “guarantee,” she has no plans to send him back.