The ‘homeless teacher’ weighs in on Orlando’s renewed push 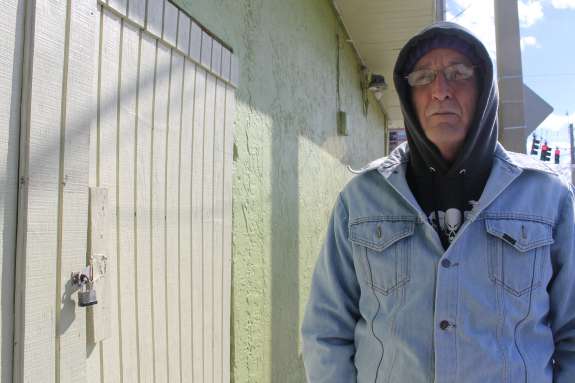 Tom Rebman, known as the homeless teacher, is spending 30 days homeless in every major city in Florida.

The Coalition for the Homeless will hold a grand opening ceremony for a new facility in Orlando January 27.

The 250-bed men’s shelter cost $6.6 million to build, and offers services beyond that of a typical shelter. Its use of social services are designed to help get people off the street.

Last summer, Orange County teacher Tom Rebman decided to go homeless for a month. He since took a year off of teaching and has been traveling the state, homeless in each major city.

90.7’s Abe Aboraya spoke with Rebman in the Parramore neighborhood by the new homeless shelter.

Rebman started by talking about the misconceptions he learned from being homeless.

“They say the homeless need to get a job, when in fact over 45 percent of the homeless have had a job in the last 30 days They don’t realize the trouble it is to go from one place to another. You come out of the shelter at six in the morning, and you have to go try and get a place to eat. Do you go eat or look for a job? That’s your choice.”

On the opening of the new Men’s Service Center in Orlando:

“I know they went form 300 overnight beds to 250 program beds, which is definitely a win. Those are rehabilitation program beds where they’re moving people out of homelessness. We need a lot more of that and less of the shelter environment.”

On how Orlando is doing on efforts to combat homeless:

“We got a lot of awareness in Orlando, and I think it made a huge difference. In the last month, we’ve gotten $10 million donated toward homelessness, as you’ve seen in the news.”

On how going homeless has affected his health:

“It’s tore my body up. If you see a before and after picture, a June to now picture, I’ve aged probably 10 years in that short a time. When you’re out in the weather constantly, it ages you very fast. Concrete sucks the life out of you.”

On how it’s affected his psyche:

“The worst part is the emotional part. Being demeaned all day, being treated like a prisoner when you go into some of these facilities to get help. You’re looking for comfort and help and what you truly get is prescriptive behavior and treated like you’re in jail.”

On how his family has reacted:

“This is no experiment. I don’t carry a weapon. So it’s real life. There’s no variable here I can control. I’m constantly in danger when I’m on the streets. Anybody is.”