The Holocaust Separated This Little Girl And Her Best Friend. Eighty Years Later, The Florida Holocaust Museum Reunited Them. 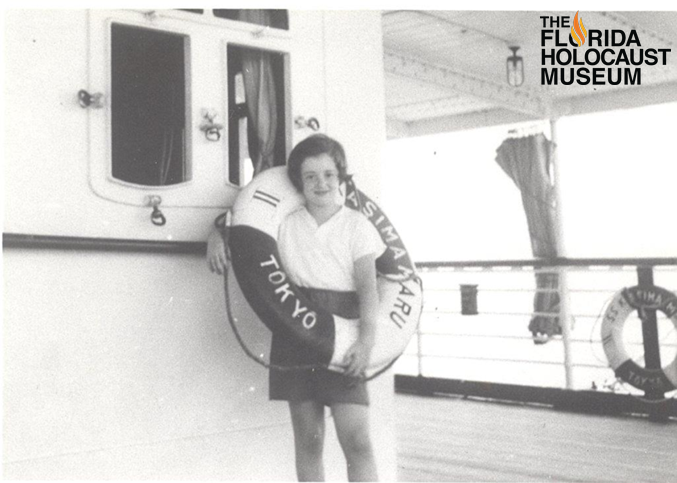 WMFE spoke with Betty and Florida Holocaust Museum Director Elizabeth Gelman about how the two women found each other again.

Danielle: So Betty, tell me a little bit about this amazing reunion that you’ve had very recently with a woman named Ana María.

Betty: She was my very best girlfriend when I was six years old, up until I was nine. In Berlin, Germany. We did everything together. We played in each other’s homes, we went to a Jewish community school together, we had dancing lessons together, we were always together, we got in trouble together.

I mean, whatever it was, we did it together.

And I had an older sister, but she had her own friends.

And so we were, we were just best buddies all the time. And then things became very difficult for German Jews and other Jews as well. And there were all kinds of rules and regulations. And I realized now that the reason we played so often in each other’s homes, was because we could not go to playgrounds, or parks or swimming pools, or theaters anymore.

So, but we didn’t know that because our parents were trying to shield us from all the terrible things that were going on with antisemitism in Germany at the time.

So eventually, when I was nine, and she also we were the same age, my father managed to get us tickets to get to Shanghai, China, to escape the terrorist acts that were going on in Germany. And Shanghai at the time was one of the few free ports where stateless Jews could go. And in that way, about 18,000 Jewish refugees managed to get to Shanghai and escape the Nazis.

So Ana María and I met in the schoolyard. Our parents brought us there, to say goodbye to each other, and we cried and we carried on and we didn’t want to leave each other. And we promised each other to stay together to by writing to each other and always remembering each other. So we left and she stayed. And I never heard another word, nothing.

I thought she was dead. I mean, I had, I had no idea where she was.

I checked the databases in different places in the Holocaust Museum in Washington. Didn’t find her. About two months ago, we got a phone call from the Shoah Foundation, the USC Shoah Foundation that they think they found somebody called Ana María Wahrenberg, not Anne Marie, one word, but Ana María. And could that possibly be my friend?

And it turned out that she was. They had gone to Chile.

Beth: Well, what is really wonderful is that we have a marvelous partnership with the USC Shoah Foundation, so it wasn’t strangers. We weren’t strangers talking to each other.

We all staff from both institutions, worked very hard to get this, to get some communication set up to make sure that we could continue talking to these two amazing women and we looped in the museum in Chile, the Museo Interactivo Judeo de Chile. I hope I’m pronouncing that correctly, who have also become partners in this. And what is happening is that we are all going to be co-hosting a virtual event this spring, a program all about Betty and Ana María.

And we are working with the Chilean museum to come up with some sort of exhibition, whether that will be online or an actual tangible exhibition.

We are working very hard, collaboratively with all the institutions. I think this story really emphasizes how critical it is for Holocaust institutions to not only continue to take in and share testimony from Holocaust survivors, but work together because what comes out of these partnerships is incredibly rich.

And what is amazing in our world today is the technology that we have to be able to share these stories.

Danielle: And Betty, I want to give you the last word. What does it feel like to be reconnected with Ana María and you know, do you ladies have plans to reunite in person after COVID is over and it’s safe to travel again?

It’s, it’s the whole thing to me is like someone has given me a gift. It’s, it makes my whole life perfect.

I’ve had many ups and downs in my life and this is such an up, such a wonderful way to to round out my 90th decade and it is just absolutely amazing to me that this happened. And I could not be happier to meet my old time friend again.

I just, I’m hoping Ana María and I speak on the phone quite a bit these days and on email and I’m doing it in German because she doesn’t speak English and I don’t speak Spanish.

So I’m learning, relearning my German all over again and she’s helping me with that. And we are hoping to stay well enough and stay, stay on our feet so that we can meet hopefully in person somewhere in the fall. But I do want to give her a hug and she feels the same way.

Listen to the full interview by clicking on the clip at the top of the page.