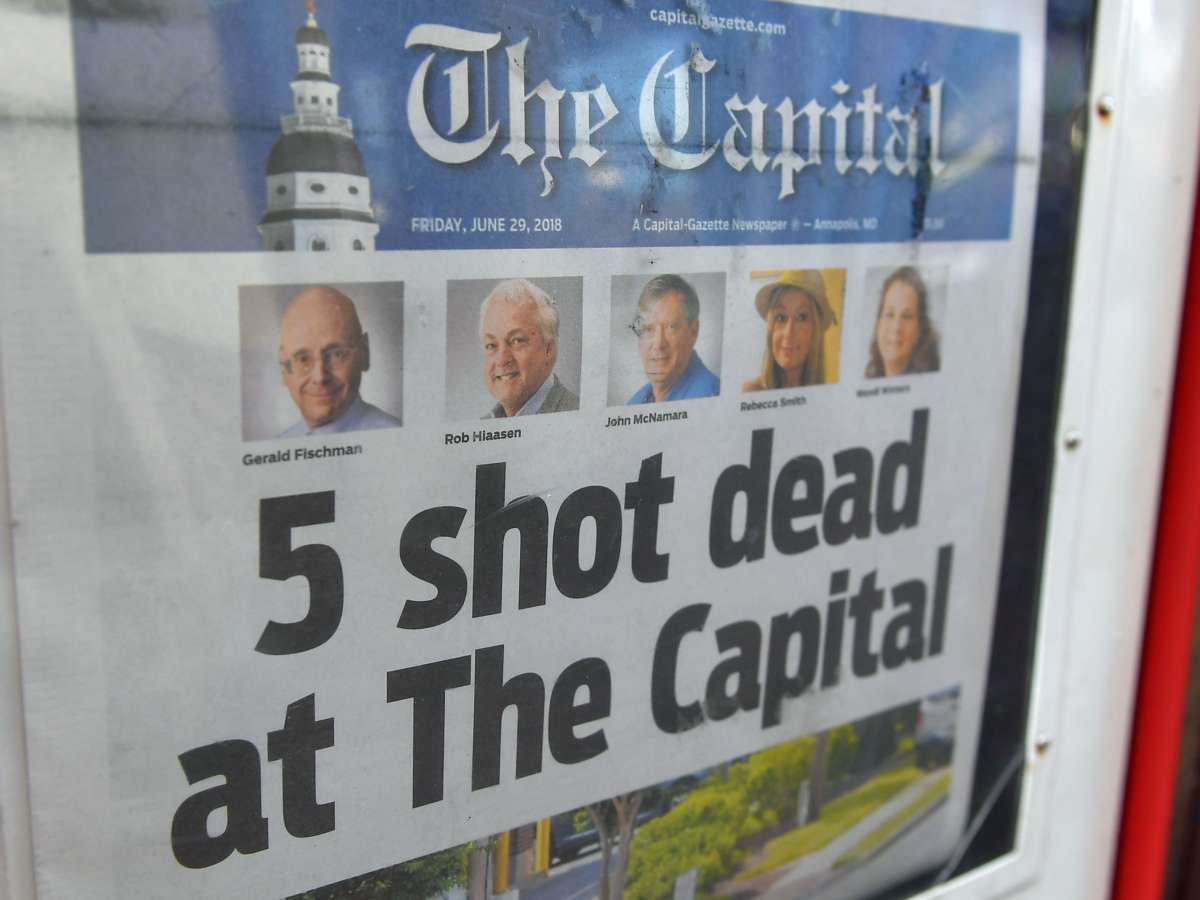 Jarrod Ramos, the admitted gunman in the attack on the Capital Gazette, was found criminally responsible by a jury in July. A copy of the newspaper is seen in a vending box in Annapolis, Md., on June 29, 2018, the day after the deadly shooting.
Image credit: Mandel Ngan

A judge in Maryland is poised to announce what’s expected to be a lengthy prison sentence for Jarrod Ramos, who admitted to killing five people in the Capital Gazette’s newsroom in 2018. A jury found Ramos criminally responsible for the massacre in July.

Tuesday’s hearing is slated to begin at 9 a.m. ET. Anne Arundel County Circuit Court Judge Michael Wachs is expected to announce a sentence of life in prison for Ramos, according to the Capital Gazette. Prosecutors have sought five life sentences without the possibility of parole.

Ramos, 41, pleaded guilty to the 23 criminal counts — including five charges of first-degree murder — in October 2019, but his attorneys argued that Ramos could not be held responsible due to mental illness, saying that at the time, he didn’t understand the criminality of what he was doing.

Prosecutors countered that Ramos had planned the attack carefully as an act of revenge on the Annapolis-based newspaper for its coverage of a misdemeanor crime he had admitted to years earlier. When Ramos assaulted the newsroom, he was carrying a shotgun, smoke grenades and extra ammunition.

A jury decided Ramos was criminally responsible in July after lengthy delays due to the complexity of the case and the COVID-19 pandemic.

The charges against Ramos included 12 felony counts of murder, attempted murder or assault, along with multiple misdemeanor charges of using a firearm during the commission of a violent crime.

Ramos held a grudge against the newspaper

The gunman accused the Capital Gazette of ruining his reputation with its coverage of his conviction on a misdemeanor harassment charge in 2011. Ramos had admitted to harassing a woman with whom he’d gone to high school.

The newspaper ran a piece titled “Jarrod Wants To Be Your Friend,” describing Ramos as an online stalker who used Facebook, email and text messages to harass the woman, according to NPR member station WYPR.

As a result of that column, Ramos became known as a “sicko” and “predator” who was dangerous and insane, he said in court filings. He was fired from his job and became estranged from relatives.

Ramos repeatedly tried to take legal action against the newspaper, its publisher and the writer of the column, only to be turned away by the courts. When an administrative judge refused his request to assign one of Ramos’ motions to a different judge, Ramos sued the administrative judge, according to WYPR.

By the time Ramos carried out his attack against the newspaper, both the publisher and the writer of the initial column about Ramos had already stopped working at the Gazette.

The surviving staff members of the Gazette worked diligently to cover the assault on their own newsroom despite a host of physical, emotional and logistical challenges. Their professionalism and dedication won the newspaper widespread praise and a Pulitzer Prize.

“Yes, we’re putting out a damn paper tomorrow,” the Gazette said hours after the attack, echoing a statement by one of its reporters, Chase Cook.

Survivors of the shooting described to NPR this year how their lives have been changed by the attack.

“You’d walk into a place and you’d say, ‘Hi, I’m Josh from the Capital,’ and people would burst into tears,” photojournalist Joshua McKerrow said. “Like I was the walking embodiment of a mass shooting and meeting me … it would hit them all at once that this was real.”

June 28 — the date of the attack — is now commemorated in Maryland as Freedom of the Press Day. A memorial to the five people killed was also erected in Annapolis, featuring five tall stone pillars and a plaque of the First Amendment.