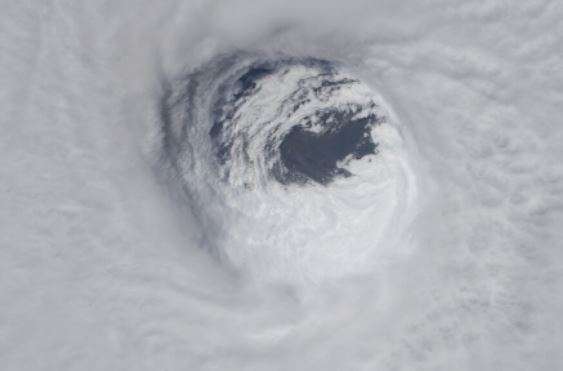 The eye of Hurricane Michael as seen from the International Space Station in 2021. (NASA/ AP)

With the official start of hurricane season just over a week away, a meandering ocean current known to supercharge storms has hurricane experts on edge.

The Loop Current, which flows through the Caribbean and into the Gulf of Mexico like a deep, warm, hurricane-fueling river, has already swung as far north as Tampa, said University of Miami Rosenstiel School of Marine and Atmospheric Science oceanographer Nick Shay. As it bends into the northern Gulf, the current is likely to shed eddies, leaving behind deep, slow-moving pools of ocean heat for months to come.

So far, the current’s location this month is looking eerily similar to 2005, Shay said, when Hurricanes Katrina, Rita and Wilma all crossed its deep warm waters.

“Just as Katrina was coming into the Gulf, the Loop Current was starting to shed one of these big warm eddies, which is what it does when it gets very far to the north,” he said. “So the hurricane trifecta occurred.”

The current’s northward trek is also crossing warmer than usual waters, he wrote in a blog post this month.

Early pre-season forecasts have already called for another above average-season, potentially the seventh in a row. The National Oceanic and Atmospheric Administration issues its official forecast at 11 a.m. Tuesday.

Shay, who has studied the current for more than three decades and whose team regularly travels aboard NOAA’s hurricane hunter planes to conduct research, said forecasters will be keeping an eye on the current.

“We now have enough evidence to say you got to keep track of it. You better know where it is,” he said. “And so folks at the [National] Hurricane Center, when they see the heat content maps, they know where the Loop Current is so they can filter that into their forecasting.”

Hurricanes gain most of their power from surface waters, which generally extend about 100 feet deep, Shay said. If atmospheric conditions are right, waters above 78-degrees can fuel hurricanes.

But as hurricanes spin across the ocean’s surface waters, they can also mix deeper, cool waters and lose strength. The current, Shay said, can keep fueling the storm because it extends hundreds of feet deeper. If wind shear, dry air and other atmospheric conditions that weaken storms are absent and waters are hot enough, Shay said that extra deep supply of warm water can amp up storms enough to cause them to quickly intensify, like Hurricane Michael in 2018 and Ida in 2021. Both caused more than 130 direct and indirect deaths and more than $80 billion in damages in the U.S.

In mid-May, satellites showed 78-degree water extending about 300 feet deep in the current, Shay said. By summer, he said that could extend to 500 feet. When Ida powered up from a Category 1 hurricane to a fierce Category 4, with 130 mph winds, in just over 36 hours, Gulf waters hovered around a steamy 86 degrees and, in the current, extended nearly 600 feet deep, Shay wrote.

In mid May, oceanographer Nick Shay mapped the deep, warm waters of the Loop Current extending as far north as Tampa. (Nick Shay/
University Of Miami Rosenstiel School Of Marine And Atmospheric Science)

“Ida explosively deepened over a warm eddy that was shed probably about a month or two earlier,” he said.

While there’s dispute over how much influence the current can have, Shay said enough research exists to shift the thinking about the current from research to operations.

“There’s a whole group of nonbelievers that think intensity change is just atmosphere, which is not true. And some of which they just think it’s a surface temperature,” he said. “Well, technically, it is surface temperature, but that’s not the full story. That’s what we’ve been preaching for 30-plus years.”