The Future Of The Pandemic In The U.S.: Experts Look Ahead 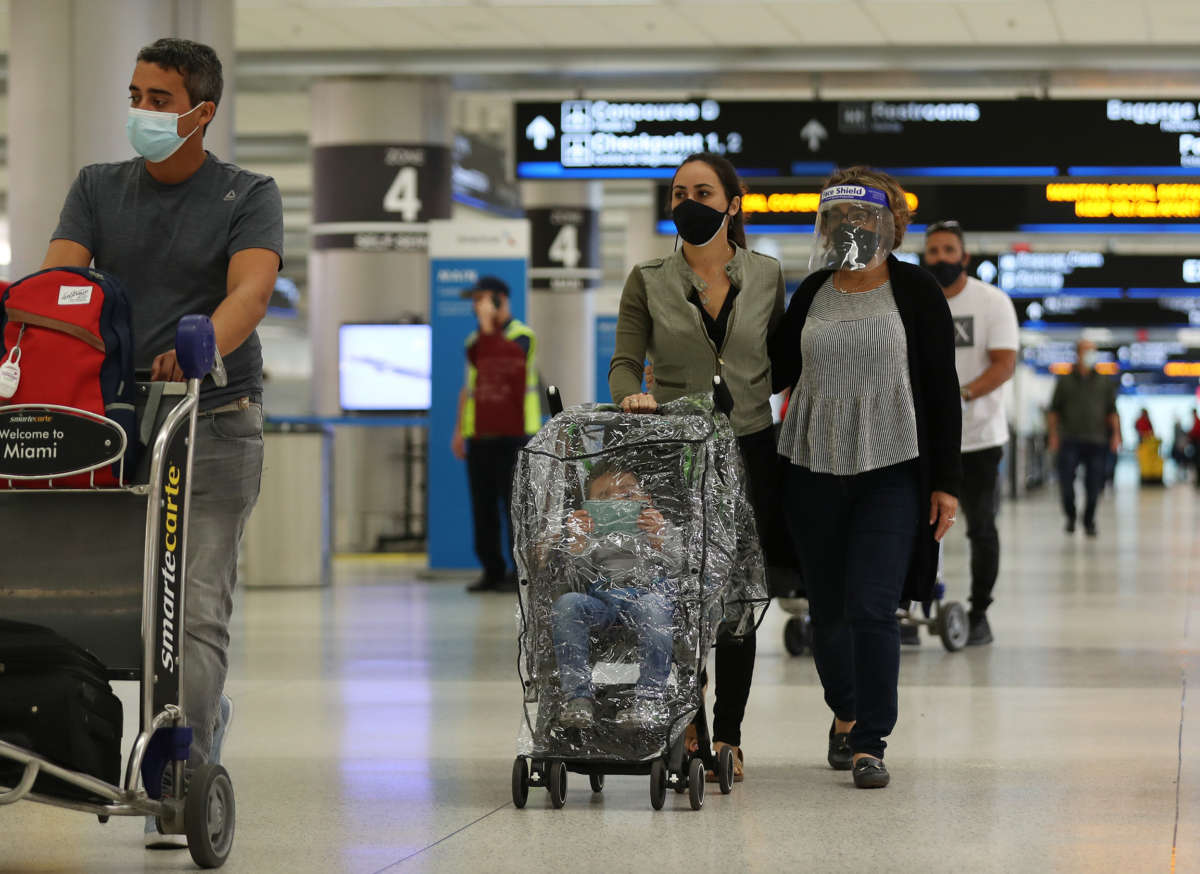 With precautions like mask-wearing in place, experts predict travel is among many activities that may become safer by this summer.
Image credit: Joe Raedle

A year after the pandemic shut down the country, a growing number of infectious disease experts, epidemiologists, public health officials and others have started to entertain a notion that has long seemed out-of-reach: The worst of the pandemic may be over for the United States.

No one thinks that’s guaranteed by any means. There are many ways the pandemic could resurge. But many say it’s becoming increasingly possible that the end may finally be in sight.

Even experts who have raised the alarm about the severity of the COVID crisis nonstop for over a year are optimistic.

“The worst may in fact be behind us,” says Dr. Ashish Jha, the dean of the Brown School of Public Health, one of more than 20 people interviewed by NPR for this story. “To be able to say: ‘I think, [I’m] cautiously, optimistic that the worst may be behind us?’ Boy, that that does feel really good.”

Now, to be clear, more than 50,000 people are still getting infected daily with the coronavirus and hundreds are dying. So there’s a great deal of sickness and suffering still in store for the country before the pandemic ends.

And the newfound optimism comes with three big caveats: The worst may be over if too many people don’t let down their guard too fast; if the more dangerous variants don’t make cases surge before enough people get vaccinated, and if the vaccination campaign doesn’t stumble badly.

But if none of those problems occur, life could slowly but steadily return to something much more normal.

The optimism is based on the rapid ramp up of the vaccination campaign combined with the fact that a significant proportion of the country already has some immunity from being exposed to the virus, and the warmer weather which is linked to slower viral spread.

“If all goes well. If we stick by the public health measures. If we effectively vaccinate. I think we are looking at a brighter future over the next several months. That’s entirely conceivable and probably likely,” says Dr. Anthony Fauci, the director of the National Institute of Allergy and Infectious Diseases.

Now, not everyone is quite ready to say the worst might be over. Several experts worry about the more contagious variants combining with too many communities lifting mask mandates and other restrictions and too many people letting down their guard, especially over spring break and Easter.

“I’m worried,” says Michael Osterholm, director of the University of Minnesota’s Center for Infectious Disease Research and Policy. “If you wanted to put all the viral ingredients in one big mixing bowl to cause them to transmit in ways that would be very damaging to us, do what we’re doing right now.”

In fact, new hot spots look like they could already be emerging, especially in Michigan and other parts of the Midwest, and in the Northeast, especially New York City and New Jersey.

But while most experts agree that combination of factors is the big Sword of Damocles hanging over the nation’s hopes, most think that the country could avoid another big surge like the one that occurred over the winter.

“There are nightmare scenarios that we can paint out. And I can’t say that those are such remote possibilities that we can dismiss them,” says Jeffrey Shaman, an infectious disease researcher at Columbia University. But I do think that this was probably the worst and it will continue to go down.”

Here’s a roadmap to what we can expect for the future of the pandemic in the U.S.

Late spring and summer: A cautious return to social life

Experts NPR spoke to predict that this spring, as more people are vaccinated, more people may be able to safely return to stores, restaurants and work, more children could return to in-person learning, and small groups of fully vaccinated people getting together for dinner parties indoors without masks.

In fact, the Centers for Disease Control and Prevention recently issued guidelines that say vaccinated people can already start to get together that way.

And if case counts continue to decline and vaccination rates increase, many public health authorities think the summer could be even better.

“Life will get better for sure,” says Ali Mokdad at the University of Washington’s Institute for Health Metrics and Evaluation. “We will see more grandparents visiting and hugging their grandchildren. More restaurants will open. We will see sport events. Weddings. Church and religious events. We will have summer camp for kids. People will travel more.”

In fact, Mokdad says, he has plans to fly to see his mother.

Still, Mokdad stresses that activities like summer camps could only probably safely operate with precautions, such as random testing, mask wearing and window open to provide fresh air.

And Americans still need to be careful: Hot spots could flare up due to the variants, people getting careless, triggering super-spreader events, and among pockets of people who haven’t gotten vaccinated.

“Specific communities may see a resurgence because of the variants — there may be hot spots,” says Caitlin Rivers, an epidemiologist at the Johns, Hopkins Bloomberg School of Public Health. “But I don’t think there will be another wave like we saw in the winter.”

By the fall, while young children still won’t be vaccinated because scientists have just started testing the vaccines on them, their teachers hopefully will be. So in places where infections are low, schools should be pretty safe, experts told NPR.

Students will probably still wear masks and may still need to keep their distance from one another. But hopefully no more slogging through school on laptops at the kitchen table for most kids.

“I am counting on it and I’m thrilled,” says Jennifer Nuzzo, a senior scholar at the Johns Hopkins Center for Health Security, who has a 7-year-old son. “Seven-year-olds aren’t supposed to spend their entire days on a computer,” she says.

Researchers like Fauci hope that more aspect of our day-to-day lives could edge back closer to pre-pandemic times.

“It is conceivable, and probably likely, by the time we get to the fall — late fall, early winter, by the end of this year — that we have a gradual but very noticeable and important return to some form of normality,” Fauci says.

Winter: Brace for another possible surge — and booster shots

Some experts worry the virus could follow a seasonal pattern like the flu and surge again in the late fall or early winter. And that threat may be even greater because of the variants, especially the strains originally spotted in South Africa and Brazil that appear to be better at evading natural immunity and the vaccines.

The vaccine works against the UK variant, explains Mokdad of the University of Washington, so with more vaccination, other variants may become dominant. “And by winter we assume these two will become the dominant one unless we have more that show up. And they will cause more infections and more mortality.”

But even if there is no new winter surge, the virus won’t be gone. It just hopefully won’t be causing anything like the suffering that’s already occurred.

It could, however, still be causing significant problems in parts of the world that haven’t gotten vaccinated, which could spawn new, even more dangerous variants that could travel to the United States.

As a result, the country will probably need new versions of the vaccines for the variants and booster shots. And many experts say it’s crucial that the U.S. help the rest of the world vaccinate as quickly as possible too.

“If we don’t get rid of this thing everywhere, it’s going to just come back and get us again,” says Robert Murphy, executive director of Northwestern University’s Institute for Global Health. “The virus will continue to mutate. This is really a worldwide problem.”

The pandemic’s after effects

But even if the country is on the road out of this, the impact has been tremendous and the after-effects are likely to be long-lasting, many experts say.

“This is pandemic is right up there as a world-changing event. It has already had a profound impact on society, on basic questions like the nature of our social interactions. It’s already shaped and reshaped this particular generation,” says Keith Wailoo, an historian Princeton University. And the ripple effects are likely to play out for years, perhaps even decades to come.”

The pandemic revealed some deep problems, such as how society treats the elderly, poor people and people of color.

“Pandemics create what some people have called a kind of stress test for all of the weaknesses and vulnerabilities and fault lines of societies and I think that’s been especially true of COVID-19,” says Alan Brandt, an historian at Harvard University.

It could change so many parts of our lives. Our homes. Our work. Travel. How we touch each other. Will the the elbow bump replace the hand shake for good?

“There’s a whole realm of everyday interpersonal practices that are going to be, you know, very very hard to revisit and redevelop easily, like handshaking and kissing and hugging,” Wailoo says. “Or even walking closely together with friends and laughing together. All of these things today carry the stigma of disease transmission.”

The Black Death led to the Renaissance. The 1918-19 flu pandemic gave way to the roaring 20s. We’ve just begun the new 20s. It’s impossible to know what world will emerge as the virus recedes. But it seems pretty clear we’ll be hearing the echoes of this pandemic for a long time.

“The disruptions to our economy to our sense of safety in the world are of an order that our established ways of thinking are likely to undergo some pretty significant changes,” says Nancy Tomes, another historian at Stony Brook University.

Online schooling and social distancing has taken a toll on kids and adults during the pandemic. The after effects of such widespread social challenges may be felt for years, experts say.
Gabrielle Lurie/The San Francisco Chronicle via Getty Images