The ‘Friends’ Reunion That Lost Its Nerve 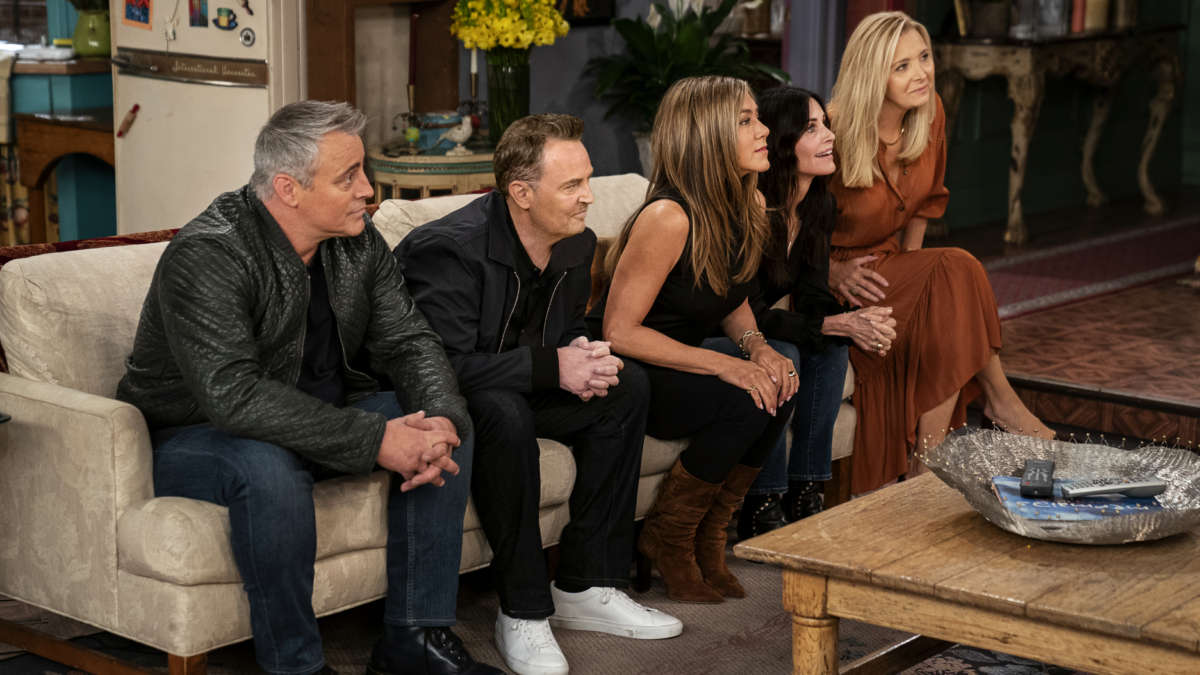 Well, there it is. “The One With The Nostalgia” — sort of.

Originally, nostalgia was understood to be a weighted and sad feeling — a disorder, even, a disruptive and painful longing for home. It came from the same root as pain-related words like fibromyalgia and analgesic. It wasn’t quite the same thing as reminiscing with your college friends or telling funny stories about your kids when they were growing up. And it definitely wasn’t the same thing as a clip show.

What’s funny about the delayed Friends reunion special, which is now available on HBO Max after a year of COVID delays, is that it flirts with the emotionally satisfying definition of nostalgia. Six actors — you probably know the ones if you’re reading this far: Courteney Cox, Jennifer Aniston, Lisa Kudrow, Matt LeBlanc, Matthew Perry, David Schwimmer — return to talk about the show that made them all enormous stars, at least for the span of time between the fall of 1994 and the spring of 2004. Their fates since then have diverged significantly.

It’s not just easy to approach this reunion with a note of cynicism; it’s almost obligatory. For all the hugging and all the crying, The Hollywood Reporter has clocked the paycheck each of the six actors landed for making the special at an eye-popping $2.5 million to $3 million. And it’s not that without the money they would have gathered anyway, but in private. No, they say in the special that they haven’t all been together in a room — except for once (circumstances unspecified) — since the end of the show. These are people who weep and embrace and got paid a collective $15 million, at least, to spend this precious time together.

We see them wander, one by one, onto a re-creation of their set (which, no, has not been sitting and waiting for them for the past 17 years). It seems to genuinely make them emotional, both because they don’t see each other that much and because places tend to provoke feelings. LeBlanc remembers Cox writing lines on the table; Perry and LeBlanc sit in their Chandler-and-Joey recliners; Kudrow and Schwimmer talk about a wooden post in Rachel and Monica’s living room that was part of the original set but was removed because it got in the way of shooting. They visit the dressing rooms where they all note that they all ate meals together for the first few years. They don’t discuss why they did not all eat together thereafter.

There is a sadness that creeps in around the edges of these segments, in part for the simple reason that this was 17 years ago. Well — it ended 17 years ago. It began 27 years ago. It’s been over for almost twice as long as it lasted. There’s no reason to believe they would all define this as the best period of their lives, but it’s certainly, for all of them, the most commercial success they ever achieved, as it would be for nearly anyone with any resume. And it was an intense experience, for sure. But alongside that sadness is, at times, the raucous energy of reunited camp counselors or performers from a play: people you don’t choose, but learn to be close to when the situation pulls you into the same orbit and then separate from again when that gravity dissipates.

What’s disappointing about the reunion is that it refuses to sit with this dynamic, which is often both sweet and funny, in favor of spending time on the one thing absolutely nobody needs: an actual retrospective extravaganza looking back at the television show Friends. Instead of being willing to accept that notes of melancholy are perfectly normal parts of reminiscing, it skitters away every time it’s clear that time is stretching out for these actors in some unnerving way, and it takes shelter in something completely familiar: the clip show.

There have been plenty of opportunities to look back on Friends: the end of the show, the DVD releases of the show, the moment when the show came to Netflix, and the moment when the show came to HBO Max. It’s been written about, it’s been reported on, it’s had think pieces written and rewritten. (Check out this young goober all the way back in 2003, writing about why Ross and Rachel shouldn’t end up together!)

The stories about how Aniston and Perry both were cast when they had other shows they might end up on have been told and told and told. The way none of them were famous, but Cox had been in that Bruce Springsteen video: told. The way Monica and Joey were originally going to be a couple: told. While producers Kevin Bright, Marta Kauffman and David Crane offer some memories, they’re largely the same memories they’ve offered over and over again — and that’s not anybody’s fault! How many times could you come up with new stories about a time in your life that retreats further every year? Anyone who cares enough about Friends to tune in to a reunion has had many opportunities to hear this stuff, although perhaps that’s less so as things have moved toward streaming and away from the golden age of sitcom DVDs that had commentaries.

There is another problem. The answer to “why do people keep having James Corden host things?” is obviously “some people like it when he hosts things,” but he seems in a particularly soul-sucking phone-it-in mode here when moderating a conversation with the cast in front of an audience. The questions are rote, there’s not a smidge of spontaneity, and he just comes off as a man reading off cards for money. Which, of course, he is (you can’t expect surprising questions when the interview subjects are producers of the special), but being able to seem like you’re not merely a man reading off cards for money is precisely the skill hosting calls for.

And while the global reach of the show is certainly impressive, and any creative person has the right to be proud of reaching people around the world, a montage of people saying Friends sound bites from their locations in different countries serves less as a salute to the universality of comedy and more as a cringey reminder that Friends was interested in the lives of a vanishingly small slice of New York.

Even worse are a series of awkward walk-ons by members of the supporting cast including Maggie Wheeler (Janice), who is welcomed so briefly that she can only perch on the arm of the couch long enough to say her catch phrase a couple of times and leave. Similar ungainly flashes of Tom Selleck and, for heaven’s sake, Elliott Gould and Christina Pickles (!!) do nothing to honor their contributions.

But the prize for most uninteresting drop-ins goes to the celebrities — including David Beckham and BTS — who are shown saying they like Friends, and sometimes naming an episode they like. It seems like the least thoughtful way to use a celebrity in a special like this, until you see Justin Bieber and Cindy Crawford, among others, walking a runway in old Friends costumes, never speaking at all.

We can all agree about how unrealistic it would be to hope this would be a special that could truly focus on what’s different now, compared to the end of the show — to focus on things we couldn’t have been shown a week after the finale in 2004. They were never going to talk about all of it, even though it’s all true: The show’s legacy has only grown more complicated as its overwhelming whiteness and dated deployments of gay panic and transphobia have not prevented it from gaining new fans on streaming. How do the people who created the show feel now about the way it’s perceived? How do they feel about how it affected other shows? How it piggybacked on other properties like Living Single? How did their decision to negotiate their contracts together affect other ensemble casts? What is it like to see projects fail after having nothing but success for years? Of course they weren’t going to talk about this stuff — of course they weren’t.

In fairness, though, the recent Fresh Prince of Bel-Air reunion leaned into the show’s biggest controversy: the acrimonious exit of Janet Hubert as the first Aunt Viv and how hurt and angry she was, privately and publicly, at Will Smith. Some people found Smith’s apology more satisfying than others, but at least they sat with the discomfort of it. Similarly, it would have been perfectly OK for this group to say “I’m so uncomfortable now when I think about some of the comedy we did, and fortunately there’s no way a set of network characters would be this white and straight in 2021,” or what have you, but they just … don’t. It’s a choice.

Still, on that set, there are moments that have resonance. You will see, for instance, that Aniston probably wouldn’t beat … well, me, in a Friends trivia contest. Or probably you, if you are or were among the show’s fans. Most of the cast wouldn’t. It’s a good reminder that they were working; they were part of something that they simply don’t think about now nearly as much as a lot of other people do. What do they think about people who are still superfans? Do they miss what it was like to be on the most popular comedy in the country? Is it a relief? Maybe.

Late in the reunion special, they agree that they won’t wait so long to get together again. And in that moment, it’s hard to doubt that they mean it, sort of, and that they might even do it in private, for free. But also in that moment, it’s hard not to remember every last day of camp, every last day at a job, every last day at a school, and every other goodbye to those we become close to through circumstance. There are always promises to stay in touch. And if there’s been a break in contact, there are always promises not to let it happen again. Those promises are generally sincere, and generally not kept. The cynical take is that they are false from the beginning; the more realistic take is that once your life spins away from people, it takes an awful lot of effort to spin it back toward them again.

Perhaps it’s all this isolation and all the reunions that have been happening in real life, or perhaps it’s that I’m roughly a contemporary of these characters — perhaps that’s what makes me far more interested in the personal reflections on the way the world has spun for these actors for the past 17 years and how they look back on it with all this distance than I am in listening in on a “so once and for all, were they on a break?” interview question. (The cast seems weirdly uninterested in this, by the way, given that I assume they knew it was coming, which is just another example of perplexing production choices.)

But if you want to hear Schwimmer talk again about how much he didn’t like working with the monkey, this special will, as they say, be there for you.