The four ‘SZNZ’ of Weezer 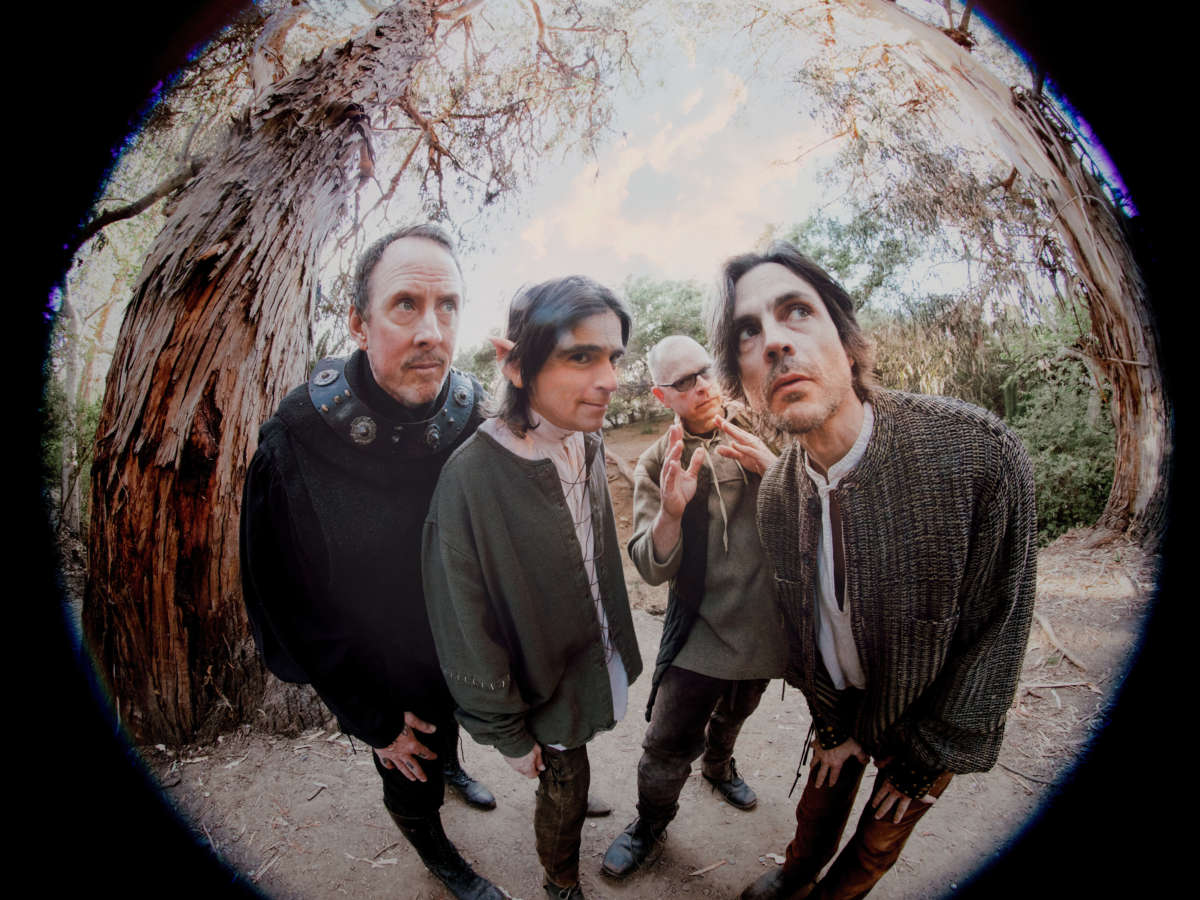 Some 300 years after Antonio Vivaldi captured the feeling of springtime with his Four Seasons, another composer is drawing from the same inspiration – Rivers Cuomo of Weezer.

His band, never one to take much time off, is putting out a quartet of albums this year in much the same spirit as Vivaldi. Cuomo has titled the series SZNZ and is beginning, of course, with Spring. It’s out this Sunday – which happens to be the vernal equinox in the northern hemisphere.

Morning Edition‘s A Martinez spoke to Cuomo about the cathartic new release, written during lockdown, and maintaining relationships three decades into a band’s life.

This interview has been edited and condensed. To hear the broadcast version of this story, you can use the audio player at the top of this page.

A Martinez, Morning Edition: So, Rivers – Vivaldi might have gotten the jump on you here, having written The Four Seasons some 300 years ago. Was that work an inspiration at all for you on this?

Rivers Cuomo: Yeah, absolutely. In each of the four EPs [of SZNZ] at least one of the songs interpolate one of his riffs. So it was fun to take a bit of one of his ideas and set my own lyrics to it and try to make it sound like a modern rock song. But I think most people are going to hear like, for example: The first song on Spring is called “Opening Night.” People are going to hear that and be like, “Wait a minute, what is that?” And then they’re going to be like, “Oh my God, I know that from some commercial or some… I don’t know, something. It’s some classical thing.” Yeah, it’s from Vivaldi.

Tell us what your approaches to this project are – what’s your mission statement?

Well, we actually had a mission statement, so I’m glad you asked. It was to pick up where we left off with our last album, OK Human. It was Weezer with an orchestra; setting aside all commercial concerns and just really delving into my love for classical music and opera music and writing on the piano instead of an electric guitar, and just trying to go all-out with the crazy composition and the melodies. And so that’s what we did… and I think we pretty much hit the nail on the head.

I think there is a lot to be said for a group that can stay together as long as you have. I think of Pearl Jam – that group has stayed pretty much the same for a long, long time. What do you think accounts for that longevity, that ability to stay together and not get on each other’s nerves to the point where you just want to never be near each other again?

I feel like we all benefited a lot from getting married – not to each other – and going through couples therapy and learning how to communicate and compromise. We didn’t have any of those skills when we started and there were definitely some rough patches, but everyone’s so chill now. It’s great.

I think it’s really reassuring to know that things can last even through some rough spots.

I’d be glad if people get that sort of reassurance from our story because we all come from broken homes. And I know for me it was super important.

Back to SZNZ. When you’re thinking about spring songs, what kind of ideas and concepts come to mind?

Well, it’s definitely thinking a lot about, you know, the typical things you think about – coming back to life, rebirth, coming out of a long, cold hibernation. In terms of spirituality like, living more in the moment and not being too hung up on self-denial, enjoying life. Those sorts of themes.

And that is exactly what I heard in the song “All This Love.” It seems to almost be a nod to the pandemic and that we’re all kind of coming out of it. It feels like we’re entering a better stage, or maybe a more-free stage. Tell us about that song.

That song is all about just this incredible feeling of pent-up energy and wanting to express yourself and go out and be social and share your love. The chorus is really explosive and says, “I got all this love, I’ve been saving it, saving up, let me let it out.” And it’s just a really, really explosive feeling. In contrast, the first verse is [paraphrasing] “I’ve been stuck inside and I got this mask on my mouth, I forgot how to sing, I forgot how to love and live.”

And on another level, thinking of how I’ve, at times, had this tendency to be too intellectual and not instinctual enough about art. There’s a very obscure nod to the scientific way of creativity, a reference to Benjamin Franklin [in] the opening line, with “the key and a kite, waiting for lightning to strike camping out in the field by my house.” So that’s me thinking too hard about how to go about my creativity instead of just letting it flow.

Were you always more intellectual instead of instinctual when it comes to your art?

I’ve had that instinct since before Weezer even existed. I mean, I remember being a teenager and being so curious about music theory and at the same time, thinking, “Wait a minute, that’s not cool. You’re not supposed to study music theory if you’re a rock musician.” So there was always a struggle for me.

But I’d say in recent years, I’ve really found a great balance and am feeling more instinctual than ever – at the same time, I have tons of spreadsheets and computer programs that I’ve written to help me along. I’m firing on all cylinders, for sure.

Now, have you started thinking about SZNZ: Summer yet?

Yeah, I’d say like everything is 90% written as of last year – this is what I did during the lockdown. So I have these folders, four folders of really well-written-out songs. I’m working with another producer now on the summer songs and we hope to have fall done before we leave for Europe at the end of May, and then finish winter in August.

Is that a normal pace for you? I don’t know – I’m not a musician, it just sounds like a lot.

I mean, a lot of the songs are short… It’s a lot. It’s definitely a lot. And you know, we’ve announced it. We’ve committed to doing it… and yet we haven’t actually done it yet. So it’s uh, it’ll be a challenge. But everyone knows what we’re in for and we’re all into it and we want to do it. And hopefully we don’t drive our managers too crazy, because it’s going to be a ton of work.

Do you work better that way? You know, announcing something, committing to do it even though you haven’t done it yet?

Oh no, I don’t. I don’t think it really affects me either way. Like, I am very, very excited to work every day just for the sake of creating something, and I don’t necessarily need the motivation of having a deadline.

Speaking from a journalist’s point of view: if there is no deadline on me, I don’t know if I’ll ever turn anything in, ever. [Laughs] So I wonder if you work that way too as an artist?

No, I don’t. I just love building stuff, and every morning I wake up and come down to my studio and build stuff, and then we have to figure out what to do with it.

What kind of reaction have you gotten from fans of yours? Sometimes, I think fans get a little too in love with what they liked about you when you started, and maybe don’t like it when an artist tries to do new things.

We definitely went through that phase, like in the beginning of the 2000s. It was real tough. But it seems like we’re surrounded by fans who are super excited about new music and they themselves are actually frustrated when they encounter other people who have closed minds [towards] the new stuff. So it feels like we’ve got a great, great little neighborhood around us.

And that being said, one of our concerns was like, “We don’t want to burn the audience out,” because we’ve been putting out a lot of music. We did two records last year and this will be another 28 songs this year.

I might be wrong on this, but it feels in what I’ve heard that you’re using a lot more acoustic instruments for the spring collection. Was that by design?

The whole time I was writing and recording. I was imagining myself in the movie production of A Midsummer Night’s Dream, when they wake up in the forest. It’s just such a beautiful, magical scene … all these woodland creatures and fairies. But that’s just spring.

Summer is going to move into a completely different emotional and sonic terrain where it’s going to be much more aggressive and angry and you won’t hear those woody sounds anymore. And then fall is going to be a much more like, technological element and dance rock. And then with winter, we return to a more acoustic, mournful tone.

I just realized, Rivers, that this is a strictly northern hemisphere kind of record – are our fans in Australia, New Zealand going to be upset?

I’ll tell you, we did make one concession already – we changed “fall” to “autumn.” Apparently no one uses the word fall except for Americans.