The Dread Factor: Why Ebola And ‘Contagion’ Scare Us So Much 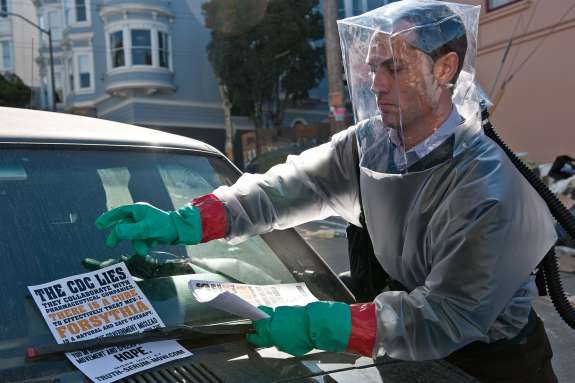 Jude Law prepares for the looming pandemic in the 2011 movie Contagion. There are huge differences between viruses in movies and Ebola in real life.

The Ebola outbreak has set off an alarm around the world. Public health leaders say the intense concern is appropriate, given the unprecedented size of the outbreak and the deadliness of the virus.

But experts say the outbreak has also produced a lot of unfounded fears. Even just the word Ebola is kind of terrifying.

Why? Well, Hollywood has a lot to do with it.

Take for instance, the 1995 movie Outbreak, with Dustin Hoffman and Donald Sutherland. “Try to remain calm. Many people are dying and are going to continue to die unless we find this monkey,” the movie’s trailer says, as it promises “the greatest medical crisis of all time.”

Then more recently, Gwyneth Paltrow’s character in Contagion spreads a deadly virus around the world in a few weeks.

“On day one, there were two people. And then four, and then 16. In three months, it’s a billion! That’s where we’re headed,” Jude Law’s character says about the looming death toll in Contagion.

There are huge differences between those movies and what’s happening right now with Ebola.

The big one is how Ebola spreads, says Stephen Morse, a virologist at Columbia University. “Luckily for us, unlike the movies, it does not spread like wildfire, and in fact does not even spread the way the flu does,” he says. “It’s not that easy to catch.”

To transmit Ebola, it takes way more than a sneeze, or even a cough. You need direct contact with an infected person’s bodily fluid, like their blood or vomit.

Another big difference is that there’s absolutely no evidence the Ebola virus is mutating in a way that would suddenly make it go crazy — and start spreading like wildfire.

“This just doesn’t happen in real life,” Morse says. “If it isn’t that transmissible, that easily, then it’s not suddenly going to acquire that ability and suddenly move across the entire globe the way the fictionalized outbreak has it doing,” he says.

So our logical brains can easily understand all of those differences. But still, many of us are afraid of Ebola — and misinformed about it.

A new poll from Harvard School of Public Health shows fears and misconceptions about Ebola are widespread in this country. More than a quarter of people fear they or someone in their immediate family may catch Ebola. And two-thirds believe Ebola spreads “easily.”

Why? Ebola outbreaks have all the ingredients for the “dread factor,” says psychologist Paul Slovic.

“Uncontrollability, catastrophic potential, fatal consequences and involuntary exposure,” Slovic says. “These are the elements that kind of go together to make up what we call the dread factor.

Slovic, of the University of Oregon, came up with idea while trying to identify what scares us the most.

So how does Ebola score? “Ebola would be extreme on the dread factor.”

That means Ebola’s just the kind of thing that would make people overreact — big time — for instance, when someone infected steps off a plane somewhere unannounced.

This fear may spark counterproductive activities, Slovic says. People may want the sick transported out of the community or their activities restricted.

Now, no one is saying Ebola isn’t a dangerous virus. We need to take it very seriously. But if people start to panic, it might trigger so much turmoil that it starts to take a toll of its own. It might also divert attention from the terrible human suffering already happening in West Africa — and the efforts to stop it.