The Delta Variant Will Drive A Steep Rise In U.S. COVID Deaths, A New Model Shows 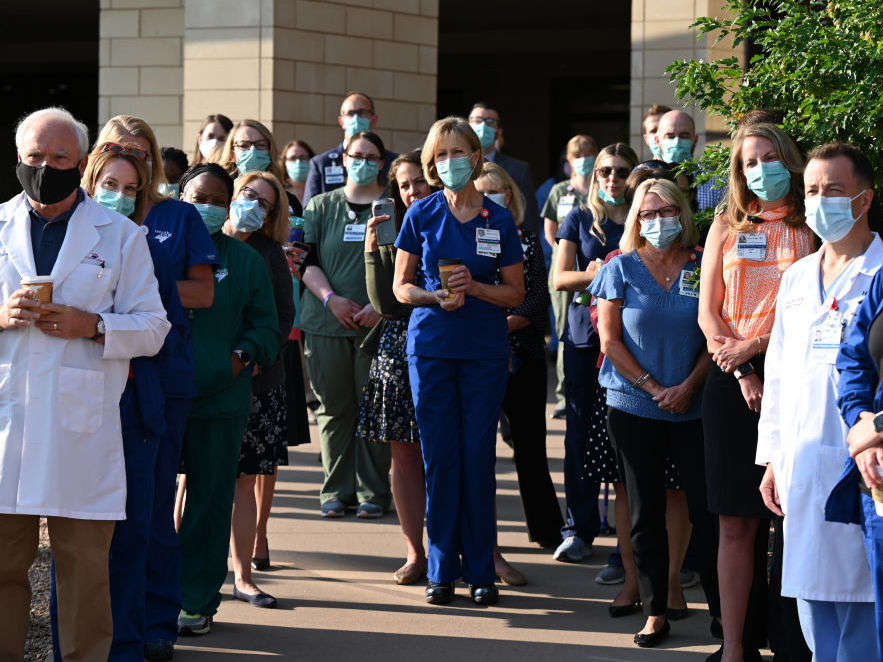 Front-line workers at a medical center in Aurora, Colo., gather for a COVID-19 memorial on July 15 to commemorate the lives lost in the coronavirus pandemic. New estimates say many thousands more will die in the U.S. this summer and fall.
Image credit: Hyoung Chang/MediaNews Group

The current COVID-19 surge in the U.S. — fueled by the highly contagious delta variant — will steadily accelerate through the summer and fall, peaking in mid-October, with daily deaths more than triple what they are now.

That’s according to new projections released Wednesday from the COVID-19 Scenario Modeling Hub, a consortium of researchers working in consultation with the Centers for Disease Control and Prevention to help the agency track the course of the pandemic.

It’s a deflating prospect for parents looking ahead to the coming school year, employers planning to get people back to the workplace, and everyone hoping that the days of big national surges were over.

“What’s going on in the country with the virus is matching our most pessimistic scenarios,” says Justin Lessler, an epidemiologist at the University of North Carolina who helps run the modeling hub. “We might be seeing synergistic effects of people becoming less cautious in addition to the impacts of the delta variant.

“I think it’s a big call for caution,” he adds.

The group’s latest projections combine ten different mathematical models from various academic teams to create an “ensemble” projection. It offers four scenarios for its projections — varying based on what percent of the population gets vaccinated and how quickly the delta variant spreads.

In the most likely scenario, Lessler says, the U.S. reaches only 70% vaccination among eligible Americans, and the delta variant is 60% more transmissible.

In that scenario, at the peak in mid-October, there would be around 60,000 cases and around 850 deaths each day, Lessler says.

Each scenario also includes a range of how bad things could get — the very worst end of the range for the most likely scenario shows about 240,0000 people getting infected and 4,000 people dying each day at the October peak, which would be almost as bad as last winter.

Lessler notes there’s a lot of uncertainty in these projections, and how things actually plays out depends on lots of factors, including whether the vaccination campaign picks up steam, and whether other mitigation measures are put back into place.

“Changes in behavior that we didn’t predict and big shifts in vaccination could very much change these results,” Lessler says.

“By the time you get to October, these resurgent epidemics have burned through a lot of the people who are susceptible,” Lessler explains.

At that point, “herd immunity starts kicking in a little more aggressively and we start to see things going down again.” By January 2022, the model shows deaths coming back down to around the current level of about 300 per day.

The take-home message of this latest model is that the pandemic isn’t over yet and “we’re not going to be able to land the plane without turbulence,” says William Hanage, an epidemiologist at the Harvard T.H. Chan School of Public Health. “How much turbulence will track with how many people are vaccinated in a given community.”

“I also strongly suspect that delta is highly prone to superspreading — if I am right, it might go off like a bomb in some under-vaccinated communities,” Hanage adds.

“I think states should maybe be rethinking the speed at which they’re removing mask mandates or social distancing,” Lessler says. “That is something that — if you want to keep cases under control — certainly would have an impact.”

Those measures would have to come from state or local leaders. Despite calls for the CDC to issue new mask guidelines, at a briefing Thursday, CDC director Rochelle Walensky once again held firm.

With that, Lessler agrees. “If we got enough people vaccinated, we could even stop the delta variant in its tracks,” he says.