The day Santas stormed Macy’s to protest for AIDS awareness 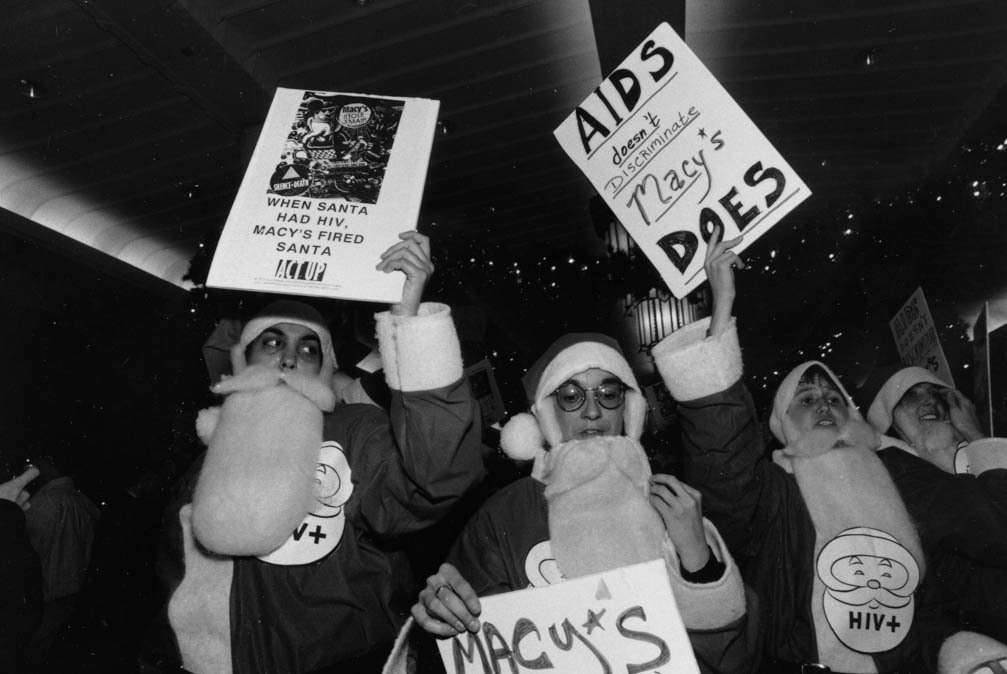 In the fall of 1989, Mark Woodley saw an ad in a local New York newspaper: Macy’s was looking for Santas to spread cheer in its department stores that holiday season.

Although he was trained as an architect, Woodley applied for the job. He thought lifting children’s spirits might boost his own.

Woodley had been at an especially low moment. It was the height of the country’s AIDS crisis, and he’d been grieving the loss of his best friend, who died of the disease. At the same time, he was coping with his own HIV diagnosis.

But playing Kris Kringle offered an escape from his diagnosis.

“It’s hard to be depressed when you’re around an excited little kid,” said Woodley, now 72, during a StoryCorps interview last month.

“It was just magical,” he said, “little kids coming in and the wonder in their eyes. And I was part of that. I’ve never been so loved. I mean, it was love for Santa, but I was the recipient.”

Macy’s invited Woodley back to fill Santa’s chair the following year. As part of the hiring process, he was asked to take a routine physical, during which he disclosed the HIV and mental health medications he’d been taking.

“I was just honest,” Woodley said. “And the minute I said that, I knew I’d made a big mistake. The doctor’s attitude changed.”

Woodley said he was told that they weren’t rehiring him as Santa. Macy’s argued, according to Woodley, that he was unfit for the role because he was on anti-depressants. But Woodley, claiming anti-AIDS discrimination, sued.

While Woodley’s case dragged on, Jon Winkleman, a young gay man from Rhode Island, had been organizing with the AIDS activist group ACT UP (AIDS Coalition to Unleash Power), when he read about Woodley’s predicament in the newspaper.

He took it to the group. “I just said, ‘We should do something about it,’ ” he recalled in the StoryCorps interview.

As part of an ACT UP subgroup called Action Tours, Winkleman said, “We did these crazy, colorful, theatrical zaps that were really impossible for the media to ignore.”

On Black Friday 1991, the busiest shopping day of the year, they staged a headline-grabbing protest.

That day, 22 activists donned Santa suits and descended on Macy’s. Gleeful crowds watched as the swarm of Saint Nicks marched into the 34th Street store in Manhattan singing Christmas carols.

“Everyone’s cheering and clapping ’cause they think this is so cute and adorable,” Winkleman, 54, said.

That day, 19 Santas were arrested, including Winkleman.

“It was genius,” said Woodley.

This year marks the 30th anniversary of the Macy’s Santa protest.

“We forced the media and the public to talk about AIDS when they really didn’t want to talk about it,” Winkleman said. “We had a sense of humor in our stuff, but the backdrop was people we loved were dying.”

Woodley eventually reached a settlement with Macy’s out of court, and went on to play Santa at various pediatric AIDS clinics in New York.

Macy’s did not respond to a request for comment, but in a statement reported by The Washington Post a day after the protest, the department store said that Woodley was not offered the position “because of the specific type of medication he was taking and the advice of our medical expert.”

When Woodley remembers the loved ones he lost to AIDS, he said, “Sometimes that grief is so sweet. But other times there’s such pain that they didn’t get to live a full life the way I have.”