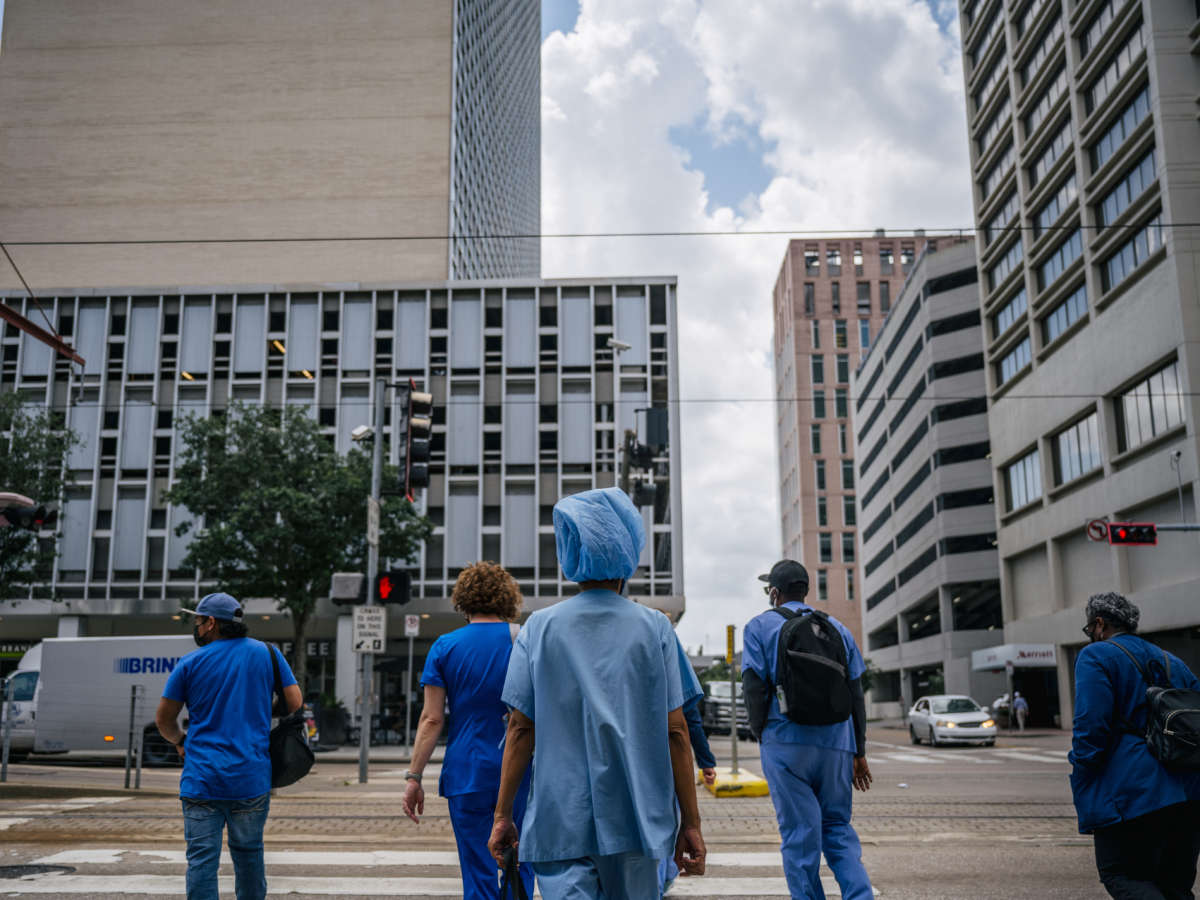 The Houston Methodist hospital system says 178 employees now have until June 21 to complete their COVID-19 vaccinations, or they could be fired. Most of the system's roughly 26,000 employees have complied with the requirement.
Image credit: Brandon Bell

The Houston Methodist hospital system in Texas has suspended 178 workers for not meeting a deadline to receive the COVID-19 vaccine — a policy that prompted more than 100 employees to file a lawsuit against the hospital. The employees now have until June 21 to be vaccinated, or face being fired.

The standoff represents one of the most high-profile examples of how employers’ desire for their workers to be fully vaccinated is being tested by some employees’ deeply held vaccine hesitancy — and in this case, the dispute is playing out within the health care system.

Houston Methodist’s employees who are unwilling to get vaccinated say the vaccines are unsafe and even “experimental.” In response, the hospital notes that hundreds of millions of vaccine doses have been safely administered after a vetting process that included three rounds of clinical trials.

More than 600 employees got exemptions or deferrals

The nearly 200 employees who missed the hospital’s vaccination deadline are now suspended without pay. The group, which includes both full- and part-time employees, was given 14 days to comply, or they could lose their jobs.

The holdouts include 27 workers who have already gotten one vaccine dose; they could complete the regimen by the next deadline, according to Dr. Marc Boom, president and CEO of Houston Methodist.

“I am hopeful they will get their second doses soon,” Boom said in an email sent to staff this week. In addition, he said that more than 600 employees were granted exemptions or deferrals for the vaccine requirement.

What the vaccine-hesitant employees are saying

The Houston Methodist employees resisting the policy note that the vaccines from Pfizer-BioNTech, Moderna and Johnson & Johnson are still not approved by the Food and Drug Administration. They’re instead being administered through an emergency use authorization.

But some of the vaccines are now up for full approval, and since the initial rollout, their use has been authorized for more and more parts of the population as health experts deem their side effects and symptoms to be negligible — especially compared with the potential risks posed by COVID-19. The disease has caused more than 3.7 million deaths worldwide, and some of those infected by the coronavirus have suffered long-term debilitating effects.

“We just want more time,” Houston Methodist nurse Jennifer Bridges recently said of the employees’ hesitancy to get the vaccine. “We want it fully FDA-approved, and we want more proper research before I’d be comfortable putting it into my body.”

In an interview with NPR’s Here & Now, Bridges also said that even if the FDA gives full approval to the vaccines, she would still steer clear.

“There’s no long-term data,” she said. “So even if they approve it right now, there’s still nothing to say what could possibly happen two, three, four years down the road.”

Boom disagrees with Bridges, saying her concerns about the vaccines’ safety seem to be based on misinformation.

“This is anti-vaccination rhetoric, and unfortunately [it’s] at play within a health care professional,” Boom told Here & Now after some of his employees filed suit over the vaccine requirement.

Bridges also alleged that doctors have been discouraged from reporting patients’ adverse reactions to the vaccines — an assertion Boom dismissed as “absolute nonsense and frankly, quite offensive.”

Bridges is the lead plaintiff in the employees’ lawsuit, which is being spearheaded by Jared Woodfill, a Houston attorney and conservative activist who once led the Harris County Republican Party.

The Equal Employment Opportunity Commission recently clarified that employers do have the legal right to require COVID-19 vaccinations for people who will be working on-site. The rule mirrors existing policies for other vaccines, such as the flu shot.

Some employers have mandated vaccination for their workers; others are sticking with incentives and bonuses that are meant to persuade reluctant employees to roll up their sleeves. Houston Methodist is among them, having offered $500 bonuses to vaccinated workers earlier this year. The hospital chain later made vaccinations mandatory.

The U.S. has now administered more than 300 million doses of COVID-19 vaccine, and 141 million people are fully vaccinated, according to the most recent data from the Centers for Disease Control and Prevention. Since the first vaccines became available to the public in December, more than 50% of the eligible U.S. population (those 12 and over) have been fully vaccinated.

Like many Southern states, Texas has lagged behind other regions in administering vaccine doses per capita. But within the South, Texas trails only Florida and Virginia in that same metric. In Harris County, which includes Houston, more than 56% of the eligible population has received at least one vaccine dose, according to the state’s health data.

Around the country, many communities are brimming with optimism about a return to a more normal summer, even as the pandemic’s effects are still being felt and mourned. COVID-19 has killed nearly 600,000 people in the U.S., and more than 33 million cases have been reported, the CDC says.

The U.S push to vaccinate a huge swath of the public hit its peak in April; since then, the most recent seven-day averages are roughly on par with rates last seen in early January (not including weekends and holidays).

For some, vaccine reluctance is entrenched

The arrival and wide availability of three COVID-19 vaccines have been credited with helping to reduce hospitalization and death rates in the U.S., where the national rate of new cases has fallen to levels not seen since the early weeks of the pandemic.

But a large portion of the U.S. public has shown unwillingness to receive any of the new COVID-19 vaccines.

Last month, 73% of U.S. adults said they either have already gotten a COVID-19 vaccine or planned to do so, according to an NPR/PBS NewsHour/Marist poll. But that left roughly a quarter of American adults who said they wouldn’t get vaccinated.

Those numbers are only slightly better than expectations that were formed when the first vaccines were heading toward federal authorization. Late last year, a Gallup survey found 63% of Americans said they would be willing to be vaccinated against the disease if an FDA-approved vaccine were available.