The Capitol Faces Its Biggest Security Test Since Jan. 6 On Saturday 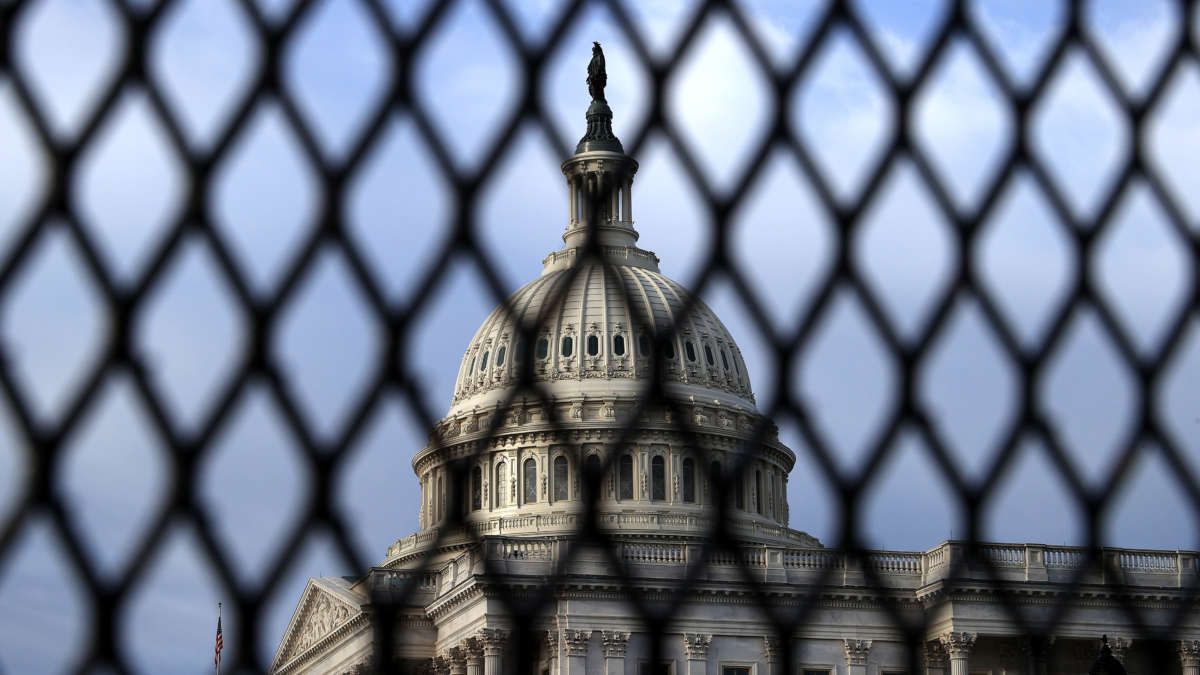 The U.S. Capitol Dome is seen through security fencing in May. Similar barriers will be in place on Saturday, when a demonstration is planned in support of people charged for the Jan. 6 pro-Trump attack on the Capitol.
Image credit: Chip Somodevilla

With a far-right rally planned for Washington, D.C., on Saturday, the Capitol will face its first large-scale security test since the Jan. 6 attack on the seat of American democracy.

Much has changed since the deadly insurrection attempt by supporters of former President Donald Trump: Three new officials oversee Capitol security, Congress has ramped up its oversight, and the law enforcement agency at the center of it all is in the midst of a transformation that follows intense turmoil.

While a top FBI official recently said there’s no credible information suggesting violence is planned for Saturday’s rally, congressional leaders say U.S. Capitol Police will be ready for whatever comes their way.

“I believe they’re well equipped to handle what may or may not occur,” Senate Minority Leader Mitch McConnell, R-Ky., told reporters earlier this week.

It’s a sentiment that has also been echoed by Senate Majority Leader Chuck Schumer, D-N.Y., and House Speaker Nancy Pelosi, D-Calif., following a closed-door security briefing with Capitol Police Chief Tom Manger and others. Congress is not slated to be in session this weekend.

Right-wing demonstrators plan to protest against the ongoing criminal cases tied to individuals charged after the siege. The rally is called “Justice For J6,” a reference to the date that Trump supporters stormed the Capitol in an attempt to stop certification of President Biden’s election victory. A group leading the plans for Saturday, known as Look Ahead America, says they’re planning a peaceful protest at Union Square Plaza near the Capitol Reflecting Pool at noon.

The Capitol fence returns, for now

Among the security plans, the Capitol will see perimeter fencing return before the event and taken down soon after, if conditions allow, Manger said. The previous fencing was removed in July, about six months after it was installed following the riot.

Also, Capitol Police have asked the National Guard to be on standby.

“The USCP has asked the Department of Defense for the ability to receive National Guard support should the need arise on September 18,” U.S. Capitol Police said in a statement.

There have been continued security threats at the Capitol since January, including a vehicular attack in April that killed Capitol Police officer Billy Evans and two separate incidents in the last month that were defused by police.

Look Ahead America is insisting that this gathering will not be a threat. “The purpose of these peaceful protests is for patriotic Americans to educate their state legislators on the power they have to give instructions to their state’s federal legislators,” the group said in a statement.

They added that they have composed a draft resolution to inform members of “the tyrannical and inhumane treatment” of the “political prisoners who have been targeted by the Department of Justice and the FBI.”

Organizer Matt Braynard, a Trump supporter, told NPR that the event is permitted and he expects about 700 people to attend.

Officials are watching the event closely

Earlier this week, FBI Deputy Director Paul Abbate told guests at a conference just outside Washington, D.C., that the bureau has no specific credible threat information about potential violence.

Several congressional members have said in light of Saturday’s rally, they continue to support peaceful protests and hope that is what transpires this weekend.

“If this is a peaceful, First Amendment opportunity, then that’s great. I support those folks who make their voices heard in a peaceful way,” said California Democratic Rep. Pete Aguilar, a member of the House Select Committee investigating the Jan. 6 attack.

But he also noted, “January 6 was not that. And so associating themselves with that day — that was not about peaceful protests. It’s one of the things that’s deeply disturbing and one of the reasons why we’re keeping such a close eye on activity Saturday.”

Aguilar joined a chorus of members who echoed confidence in the Capitol’s new security efforts.

Congressional leaders have installed new top protocol officers in each chamber since the siege. Retired Army Gen. William Walker, who led the D.C. National Guard on Jan. 6, is now the House sergeant at arms. Retired Army Lt. Gen. Karen Gibson is his counterpart in the Senate.

“The sergeant at arms, the Capitol Police are in charge of security. I think they’ve learned a lot of lessons,” said West Virginia GOP Sen. Shelley Moore Capito, who sits on the Senate Rules Committee that oversees the police agency. “We’ve heard a lot of testimony, and I’m sure they have everything under control. I have full faith in them.”

He told reporters that he was “hopeful” about “the steps that they’ve taken to be sure that they have the right kind of backup from neighboring agencies.”

Blunt added that the longtime police chief’s credentials, previously heading up departments in nearby Fairfax County, Va., and Montgomery County, Md., has prepared him for this moment. Manger was installed in his new role in July after a nationwide search.

A vocal critic of perimeter fencing at the Capitol, Blunt endorsed the idea of putting the barrier up temporarily for Saturday’s event.

“The test of how quickly it gets up and gets down may be a better thing to look at than to continue to talk about a permanent fence around the Capitol,” he said.