‘The Boys In The Band’: Raging Gracefully 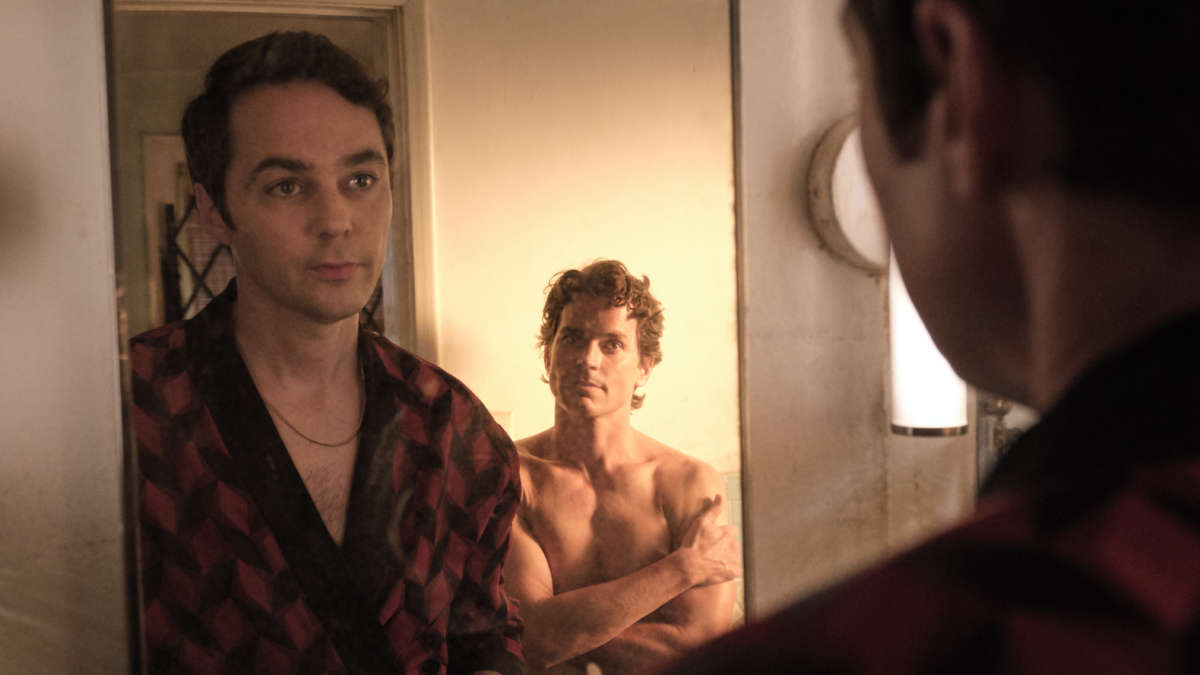 "Mirror, mirror, on the wall, who's the fairest ... you know what, never mind. I'm good." Michael (Jim Parsons) and Donald (Matt Bomer) in The Boys in the Band.
Image credit: Scott Everett White

Inspired, at least in part, by critic Stanley Kauffman’s challenge to gay playwrights to ditch all the hinting and coding and veiled metaphor so as to honestly and openly depict the lives of homosexuals in their work, Mart Crowley’s The Boys in the Band debuted off-Broadway in 1968.

The structure was simple and not, to any regular theatergoer, unfamiliar: Over the course of an evening, characters gather, get drunk and turn on one another. Things get said that cannot be unsaid. Secrets are revealed. Curtain, house lights up.

The difference, of course, was that 1. It was a group of gay men doing all that gathering and drinking and lashing out, and 2. The lives of gay men in 1968 being what they were, most of the lashing taking place on stage turned out to be self-flagellation. These characters were caustically funny, yes, but they were also wracked with guilt and shame and self-hatred.

The play was a hit, and was made into a stagey movie directed by William Friedkin in 1970. The movie was not a hit.

There were many reasons for that, but surely one of them must have been what happened in the year that fell between the debut of the play and the premiere of the movie: the 1969 Stonewall riots.

The mood had changed. To many theatergoers in 1968, schlepping into the city from Scarsdale or Ronkonkoma to take in “the homosexual play” must have seemed like a way to dip a toe into the bohemian counterculture that Life magazine was always going on about. After the Stonewall uprising, however, the queer community was flush with a sense of righteous anger and defiance. Suddenly, Crowley’s gaggle of inward-turning, neurotic, self-loathing yet exceedingly comfortable (mostly) white men no longer seemed like a bold statement. They felt like broad caricatures from the darkest, most self-conscious corner of the closet.

But Crowley’s decision to center a play on the lives of gay men in 1968 was important, and remains so, in terms of media representation of marginalized groups. Depictions of queers in entertainment have generally followed the same slow, steady series of steps, over time, that depictions of women and people of color have:

First, we’re the villain — the enemy that the (white, straight, male) hero must vanquish, to re-establish the status quo.

Next, we’re the victim — the poor pitiable soul that the (white, straight, male) hero must selflessly defend (or, all too often, avenge) to establish his virtue.

Then, we’re the ally — the sidekick, the sassy friend who fires off a snappy line to encourage the hero to chase his dream.

Finally, if we’re lucky, after years of struggle, we get to be our own hero, telling our own stories.

The Boys in the Band jumped the line. Crowley placed his gay men at the center of the stage, at the center of their own stories, and did so with an honesty that wasn’t interested in defensiveness, apology or self- justification. That’s because, crucially, the lens through which audiences saw the play’s action didn’t belong to the straight world, and made no concessions to it. The play barely even acknowledged the straight world, at least not in a manner that had characters railing against oppressive homophobia. But then, it didn’t need to, as Crowley’s point is that his characters have so internalized the cultural revulsion for homosexuality that they’ve become their own villains, victims and, only grudgingly, allies.

Over the years, both the play and the film have had their vocal defenders, but for a long time, many in the queer community held them in low esteem. Queer theater and queer cinema, which grew defiant in the years after Stonewall, took on a new sense of urgency and rage as AIDS ravaged the community. In the face of the epidemic, Crowley’s comfortable, cashmere queens trading their tired barbs seemed wildly inessential, even campy, and glib lines like “Show me a happy homosexual and I’ll show you a gay corpse” took on a new patina of tastelessness.

The film version of The Boys in the Band that debuts today on Netflix is an adaptation of the brief, widely praised all-star, all-queer 2018 Broadway run that marked its 50th anniversary. I say adaptation; it’s more a cut-and-paste, as the entire Broadway cast remains intact, reprising their respective roles, along with director Joe Mantello. Attempts have been made to flesh out the play around its edges — the film begins with a montage of the various characters going about their day before heading to the birthday party. But The Boys in the Band remains a stand-and-deliver endeavor in which characters are as apt to launch into monologues as they are to hold a conversation.

The staginess is ameliorated somewhat by the film’s actors — who, more so than the 1970 film’s cast managed to do, calibrate their performances for the intimacy of the camera, instead of the back of the house. There’s an unforced quality to, say, Tuc Watkins’ portrayal of a buttoned-up, “straight-acting” man in the process of divorcing his wife in favor of Larry (Andrew Rannells) a louche free spirit who at one point delivers a monograph against monogamy.

But that slightly reined-in quality doesn’t serve everyone well: The disquietingly symmetrical Matt Bomer’s Donald — who is, on paper, an angst-ridden, neurotic mess — comes off as a calm, blandly handsome cipher, and his early expressions of nervousness ring false, as if he’s performatively voicing self-deprecation in an effort to endear himself to others. (A hottie made for the age of Twitter!)

The best thing about the play and film, structurally, is its central bait-and-switch: The birthday party in question is being thrown for Harold (Zachary Quinto) who doesn’t show up until the act break, allowing the other characters to talk up how nasty and vindictive he is before he arrives. But of course, it’s birthday-party-thrower Michael (Jim Parsons), our ostensibly sympathetic central character, who turns out to be the real bomb-thrower, as he descends into drunken, vituperative hostility. Quinto hangs at the play’s periphery, but puts an Eartha Kitt spin on his delivery, making his every line of dialogue describe a graceful, filigreed arc through the air of Michael’s cluttered West Village apartment. Parsons excavates the despair at the core of Michael’s wry persona, and he does drunk great (they don’t give Oscars for drunk-walking, but if they did, he’d walk away with one, overcorrecting for every tiny stumble along the way.)

Those are the big-name actors, but it’s the performers who get fewer lines –Robin de Jesús and Michael Benjamin Washington — who make the biggest impressions, late in the play when alcohol combines with a wildly ill-considered party game that leaves their characters emotionally wounded.

The heaviest lift, performance-wise, is shouldered by Brian Hutchinson, as Michael’s visiting, putatively heterosexual old college roommate. The character is thinly drawn — he’s just there to drive the plot — and his actions aren’t clearly motivated (never mind his assaulting of de Jesús’ character, why in Judy’s name doesn’t the guy just leave?) but Hutchinson gamely attempts to connect the script’s disparate dots; he mostly succeeds.

What’s striking is how this play is likely to land, in 2020, with viewers who aren’t already familiar with it. Because it is likely to seem to them…oddly familiar.

The rhythms of Crowley’s dialogue, the archness of these bitchy one-liners, even the play’s central “the worst homophobes are secretly gay” narrative backbone — in the years since the play debuted, they’ve been taken up by hundreds, even thousands of other plays, films and television shows. To say that watching The Boys in the Band today feels like uncovering a lost, extended, Very Special Episode of Will and Grace — complete with celebrity stunt casting! — is not to denigrate Crowley’s play, but to address how much of its DNA has found its way into so many disparate aspects of culture.

Yes, his characters are types, who tend to announce the contours of their personalities immediately upon making their entrance. And yes, they go at each other with a kind of playful vindictiveness. And none of it will seem particularly groundbreaking or new to anyone who’s caught even a few minutes of RuPaul’s Drag Race: Untucked.

With greater queer representation comes a growing impatience with depictions of queer life that are too idealized, too scrubbed, too self-consciously styled to present us as role models or paragons, because to do so is to reduce us, to strip away our complexity and our humanity. It’s also to value the perceptions of an imagined straight audience over our authentic lives.

Crowley didn’t create the self-lacerating queens of The Boys in the Band to reflect our best selves, but to capture and display something essential about our true selves, at a time when most gay men we still hiding theirs away. What he found was not, and is not, pretty (Bomer conspicuously excepted). But today, after generations of queer media depictions that have ranged from the strident and graphic defiance of New Queer Cinema to the schitcky, thinly coded setups-and-punchlines of The Golden Girls, the impression the now-52-year-old The Boys in the Band leaves with you is no longer that of hopelessness and self-loathing. It’s been around too long. Whatever unique power it once possessed to speak to its cultural moment has faded with that moment, and the caustic nature of its characters has been softened by time, and by its many imitators.

The Netflix film is content to let Crowley’s play remain a perfectly preserved artifact from a bad time, without struggling to impose contemporary parallels or meta-meanings atop it. And that’s the right impulse. Because it so ruthlessly targets the least flattering aspects of gay men’s inner lives, it doesn’t need to be topical. But it will always be relevant.