The Bahamas Have Ancient Sponges In Underwater Canyons. They Have Something To Say About Climate Change 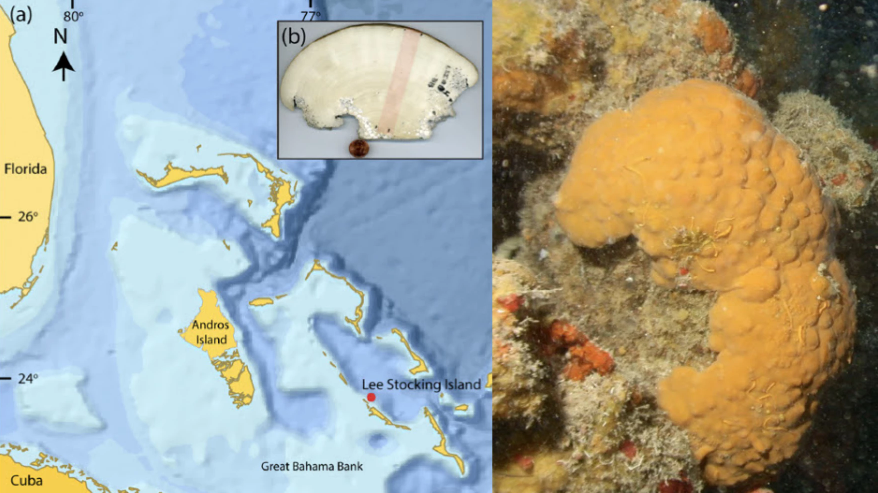 The 615-Year-Old Sponge Used For The Study Was Found Near Lee Stocking Island In The 1990s. / University Of Miami Rosenstiel School Of Marine And Atmospheric Science

The deep sea sponges are also found in the Caribbean, containing centuries of records about ocean changes. But collecting them has been hard.

As climate change warms the oceans, scientists have generally relied on old ship records, or coral and tree rings, to track rising temperatures and predict future warming — despite errors in data or misinterpretations of the old ledgers.

But a new study found there may be a more reliable measure: ancient deep sea sponges found in waters around the Bahamas and Caribbean.

“Most people think sponges are sort of like the kind in the bath, but this is a hard sponge,” said Peter Swart, a geochemist at the University of Miami Rosenstiel School of Marine and Atmospheric Science — and a co-author of the study.

Hidden in those tough, slow-growing skeletons are records of ocean changes like temperature, salinity and carbon being driven higher by climate change. Unlike coral, clams, sediment, tree rings or other proxies used to track temperature, the chemicals in their skeletons are less affected by other influences. That makes them, as scientists say, less noisy.

Their old age also means researchers can look at a much longer record of change. For this study, they looked back to the 1400s.

And what they found was remarkably accurate, Swart said.

“This corresponds really well with the model reconstructions of temperature,” he said, which other proxies did not. “So that’s the striking thing that jumped out, because of the strong agreement between the key records.”

Scientists Say Hard Sponges Found Deep In The Ocean That Can Live For Centuries, Called Sclerosponges, Can Provide A Better Record Of Climate Change Than Corals And Other Lean Life That Register Changes. (WLRN)

The problem is where they grow, in deep caves and the sides of ocean cliffs.

“They grow down as deep as like 150 meters, maybe deeper. We don’t really know, because there’s less known about parts of the ocean than there are about the moon. So really we have very little idea about the extent of these sponges,” he said.

Swart collected the sponge used for the study in the 1990s, near a now-abandoned marine research station on Lee Stocking Island in the Exumas, not far from the Bahamas’ vast underwater canyon.

The island was owned by Florida submarine builder and newspaper publisher John Perry, who helped create the National Oceanic and Atmospheric Administration in 1970. Perry founded his eponymous research institute that same year and in 1984 opened the undersea research facility on the island, which not surprisingly drew researchers from the UM campus.

“They had this submersible there, that’s where we collected them,” Swart said.

Using a microscopic slicer, researchers were able to collect more than a thousand samples from the sponge. They found that between 1385 and 1800, no change in temperature was recorded in its skeletal tissue. But between 1800 and 1993, the sponge registered a temperature change of between 1.5 and 2 degrees Celsius.

That’s higher than projections by the United Nations International Panel on Climate Change, researchers noted, but consistent with sponges studied in Puerto Rico. The temperature shift also matched measurements taken near Lee Stocking Island between 1987 and 1995.

The study, published in November in the journal Geophysical Research Letters, is not the first time the sponges have been suggested as a better record-keeper. Back in 1998, the Rosenstiel School hosted a workshop that concluded they needed to be better studied.

Swart would like to collect more sponges — he wants to do additional research looking at salinity change and how the oceans process carbon. But because the research is fairly new, and renting a submarine is not cheap, he said he’s been struggling to get funding.

The Perry Institute, which was one of six NOAA underwater facilities, was abandoned in 2012 and now draws mostly travelers curious about the abandoned fish tanks.

“Every time we try to actually get money from the National Science Foundation, proposals get turned down because it’s too expensive and it’s too speculative,” Swart said. “You don’t know where they are. And why should we give money if you don’t know where you are?”