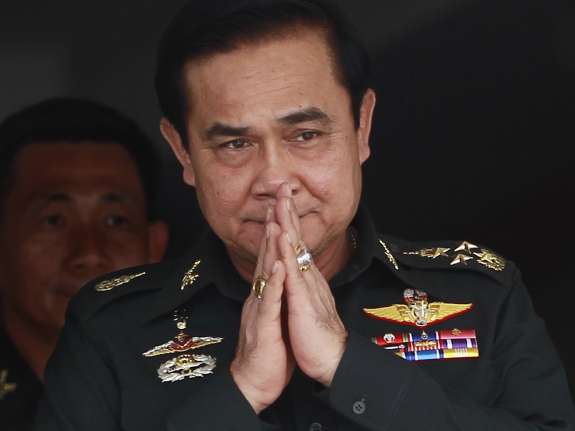 Thailand's newly appointed Prime Minister Prayuth Chan-ocha gestures in a traditional greeting during his to a unit of the Queen's Guard outside of Bangkok on Thursday.
Image credit: Chaiwat Subprasom

The man who toppled Thailand’s democratically elected government in May has been chosen as the country’s interim prime minister.

Not surprisingly, junta leader Gen. Prayuth Chan-ocha’s hand-picked legislature voted 191-0, with three abstentions to legitimize the coup leader’s role as head of government. He was the only candidate.

Michael Sullivan, reporting for NPR from Thailand, says: “Today’s vote is the first step toward creating an interim government, but the army remains firmly in control. Gen. Prayuth says his aim is to create conditions to allow fresh elections and a restoration of democratic rule by October of next year.”

The Associated Press reports that Prayuth, 60, is due to retire from the army next month and until then will hold both positions.

“Thursday’s appointment appears aimed at keeping him at the helm as the military implements sweeping political reforms critics say are designed to purge the ousted ruling party’s influence and benefit an elite minority that has failed to win national elections for more than a decade.”

“‘He could have refused the job, but what would be the point?’ said Pavin Chachavalpongpun, a Thai professor of Southeast Asian studies at Japan’s Kyoto University.

“‘If he wasn’t prime minister, he would have been manipulating the prime minister from behind the scenes,’ said Pavin, whose passport was revoked after he criticized the coup and refused to respond to a junta summons ordering him home.”

In an article in The Bangkok Post headlined, “After vote, Prayuth gives coy smile,” the general is quoted as saying he had not been approached prior to being nominated on Thursday.

“I only want … the country to move forward,” he told the English-language daily.

Last month, the country’s ailing 86-year-old King Bhumibol Adulyadej approved a junta-authored provisional constitution, the 19th since the end of absolute monarchy in 1932. In it, the ruling military council, known as the National Council for Peace and Order, or NCPO, maintains near complete control.

Prayuth staged a May 22 coup against Prime Minster Yingluck Shinawatra, who, like her older brother, former Prime Minister Thaksin Shinawatra, was ousted by the military despite landslide election victories. May’s putsch marked the 12th time in 82 years that Thailand’s military has seized the reins of government.

Ahead of Thursday’s vote, The Wall Street Journal reported that Prayuth had promised the new constitution would be the second phase of a three-step program of overhauling the country’s politics:

“That plan focuses on eradicating corruption and promoting good governance and a proper checks-and-balances system.

“The junta will be in charge of security affairs and provide advice and recommendations to the new government, Gen. Prayuth said earlier.

“Political analysts predicted that the general himself may take the position of prime minister. ‘I think it’s going to be a spoils system. Prayuth’s loyalists will get nice postings [in the cabinet],’ said Paul Chambers, a professor and military analyst at Thailand’s Chiang Mai University.”