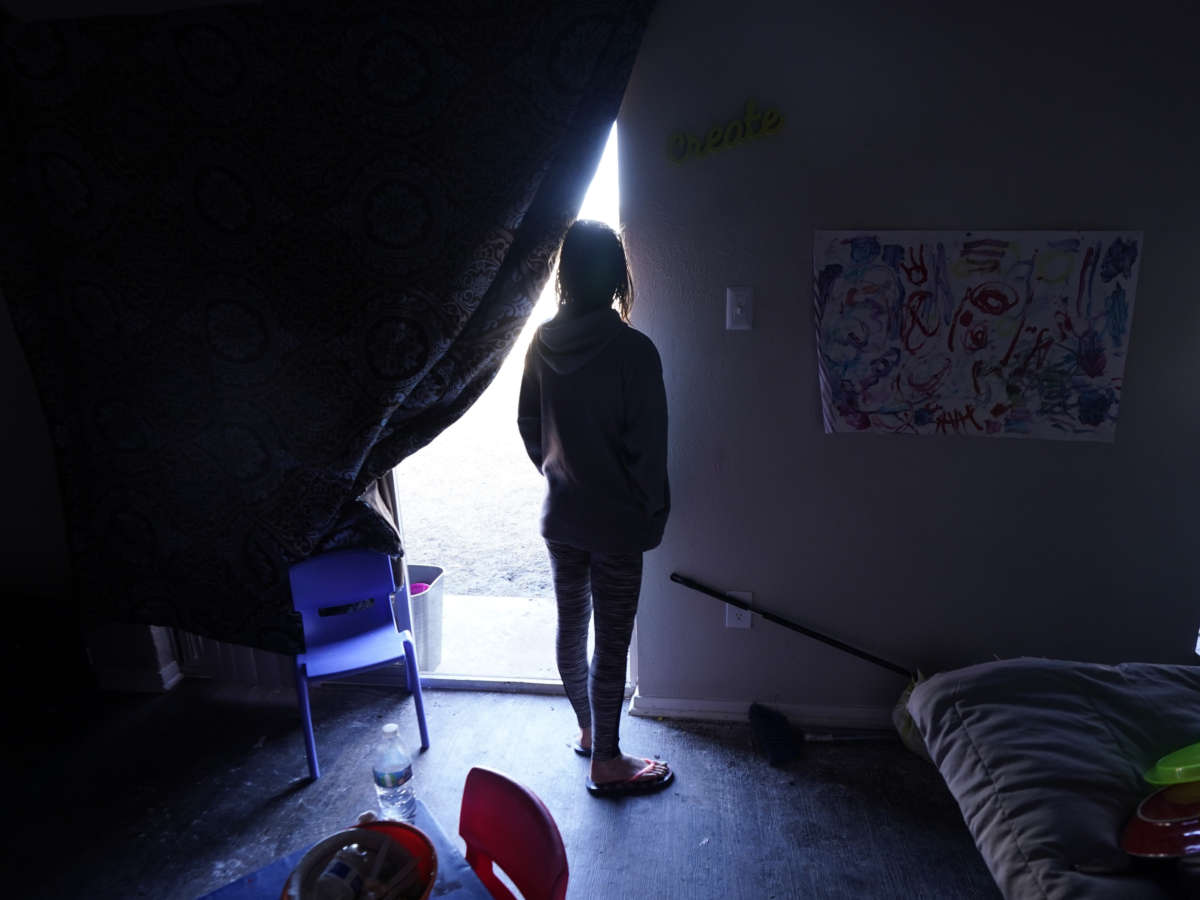 In February this year, Ricki Mills looks out from her Dallas home as she waits for a fire hydrant to be turned to get water. Texas lawmakers have approved a package of measure aimed at addressing what went wrong during one of the worst power outages in U.S. history.
Image credit: LM Otero

Texas state lawmakers had just started a legislative session when deadly blackouts gripped the state in February. The timing was fortunate. In Texas, legislators typically meet only once every two years. The fact that they were already in Austin meant they could act quickly, and many vowed to shore up the state’s electric grid and create safeguards against future power outages.

This week lawmakers did approve a sweeping package of measures to address specific problems that threaten electric reliability — some of them despite opposition from the oil and gas industry. But many electric grid specialists, policy analysts, and state politicians themselves say they’ve failed to do enough to prevent another blackout disaster.

After a decade of warnings, a weak mandate to “winterize”

Ever since another major freeze and blackout ten years ago, experts have said Texas needed to “winterize” or “weatherize” not only its power plants, but its oil and gas infrastructure as well. The reason is that cold weather can freeze wellheads and other components in the natural gas supply chain, stopping gas from getting to power plants.

Despite February’s deadly disaster, it was not clear that would happen this time either. Industry lobbyists, and regulators often seen as cozy with them, rejected winterization.

Christi Craddick, the elected Republican Chair of the state’s oil and gas regulatory agency, the Railroad Commission of Texas, even denied the large role oil and gas failures played in the blackout.

“My industry resolved the problem and didn’t really create it,” she told lawmakers soon after the blackout.

Given such pushback, it was a big deal when State Representative Chris Paddie [R-Marshall] managed to get a sweeping blackout response bill through the state House of Representatives. It was called Senate Bill 3 and it now waits Governor Greg Abbott’s signature.

“It is the bill that addresses those fundamental issues that we identified early on… with oversight, accountability, communication failures and weatherization,” said Paddie as he brought the bill for an initial vote.

That weatherization part of Senate Bill 3 allows regulators to determine which parts of the natural gas supply chain are critical to electricity production, then require that they be protected from the cold.

Most agree that it is progress. But it only applies to equipment linked directly to power plants. Experts say it ignores the interconnectedness of the gas infrastructure.

“What I fear, that it’s just not going to be enough,” says Dan Cohan, a professor of civil engineering at Rice University.

He says if there’s another big freeze, “whoever has those direct lines into the power plants and winterizes those is going to point upstream and say ‘well those upstream people couldn’t get us enough gas.’ So yeah it’s hard to see how this is going to provide us full coverage.”

The law also includes penalties as low as $5,000 a day for companies that do not winterize. Critics say those fines could cost less than the price of complying with the law.

“$5,000 for a big oil and gas company, to say it’s a rounding error is probably an overstatement,” says Doug Lewin, president of the consulting firm Stoic Climate and Energy.

After the blackout, analysts at the Federal Reserve Bank of Dallas said one simple way to build resilience into the natural gas supply chain would be to mandate weatherization of new gas wells built in Texas.

Lewin points out that the legislature failed to act on that recommendation.

Other major proposals that might help safeguard the grid in both winter and in summer hardly received a hearing. Likely, critics say, because these plans could threaten the profits of natural gas suppliers or electric generators.

Suggestions to encourage power plants to have emergency backup fuel were rarely discussed. Bills to increase energy efficiency standards to relieve pressure on the grid were voted down. A proposal to back up the Texas grid by connecting it to other parts of the country was also not addressed.

Jim Boyle, a former Public Counsel at the Public Utility Commission of Texas, thinks the Texas energy industry may have derailed some of these measures because they would reduce its market power over the grid.

“I think oil and gas interests think, ‘Man, that doesn’t sound too good to me!'” says Boyle, who now works as an attorney.

In Texas’s deregulated energy market, companies can actually make more money during a blackout when supplies of gas or electricity are tight and demand is high. Many say until that basic fact is resolved, the state will remain vulnerable to blackouts.

“However the market is structured, that’s going to drive what happens with the building of generation, the weatherization and sustainability of that generation. The cost of it to the consumer,” says State Representative Donna Howard [D-Austin].

Howard and other lawmakers expect they will be asked by House and Senate leadership to study and hold committee hearings on electric market reform for potential action during the next regular legislative session in 2023.

An alert system, and crackdown on price spikes

Despite the shortcomings Howard sees in the blackout response, she believes lawmakers “made some steps forward” this legislative session.

In addition to mandating the winterization of power plants, new legislation establishes an energy alert system to warn Texans of a potential grid emergency. It also cracks down on retail electric plans that tie the price customers pay to the spot market price of electricity.

After the blackout many customers with plans like that received electric bills for thousands of dollars because of price spikes during the crisis.

Specific reforms like these had such widespread support that Senate Bill 3 passed both chambers of the state legislature without a single vote against it.

State Rep. Jon Rosenthal is a Houston Democrat who also works as an engineer in the gas industry. He supported the bill because he liked some of the provisions within it but says, “it’s just not enough.”

“In the end,” Rosenthal says, “the product that came out of this body is not strong enough to ensure that we won’t have another catastrophic event.”

There’s a chance such an event might come soon. Summer is the time of year Texas usually uses the most energy, and some analysts say the state’s grid runs the risk of yet another blackout in the coming months.