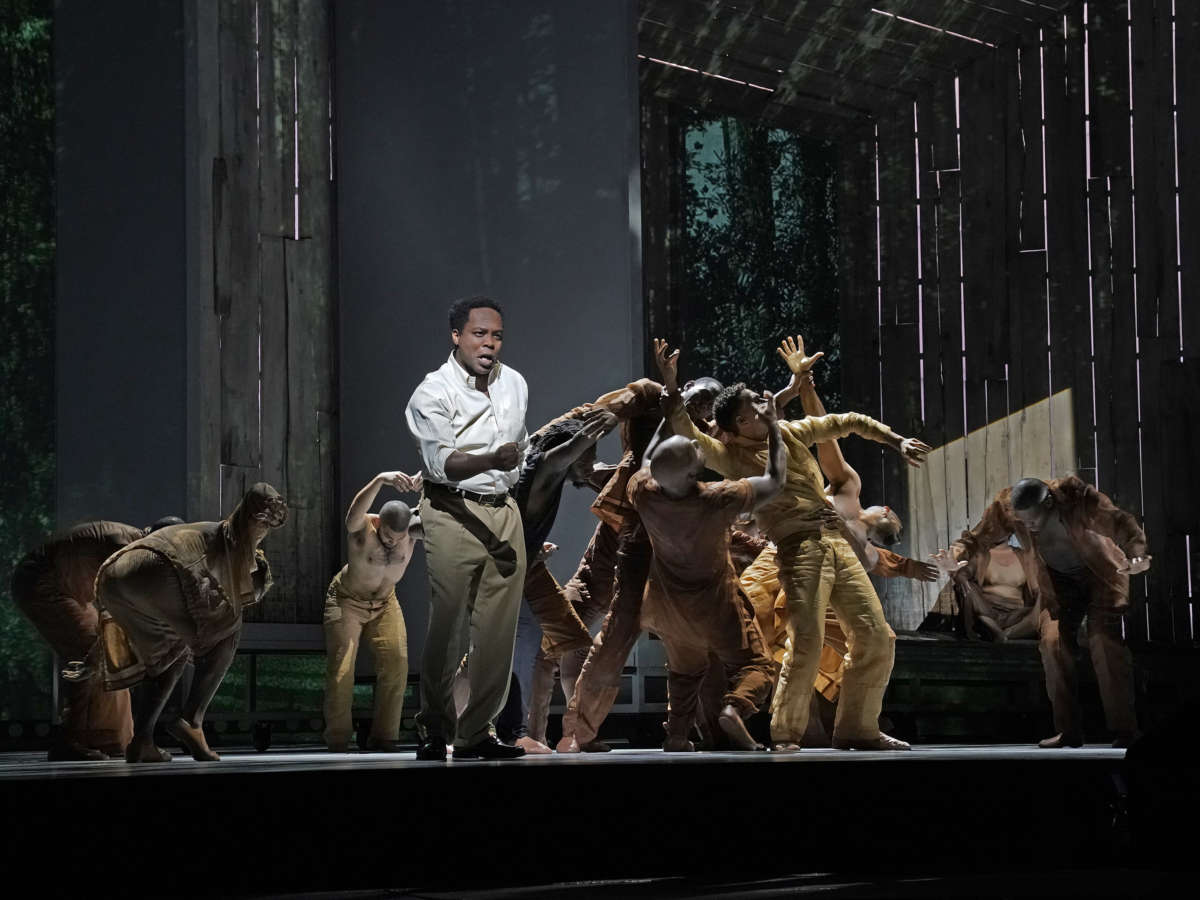 Will Liverman (center) as Charles in Terence Blanchard's Fire Shut Up in My Bones.
Image credit: Ken Howard

History is being made tonight at New York’s Metropolitan Opera: For the first time in 138 years, the eminent company will present an opera by a Black composer. After 18 months of pandemic-canceled performances, the nation’s premier opera house will open its new season with Fire Shut Up in My Bones, composed by Terence Blanchard.

As a trumpeter, Blanchard has played with jazz legends like Lionel Hampton and Art Blakey. He’s been nominated for two Academy Awards for his film scores, and has won five Grammys for his jazz records. But at a recent Metropolitan Opera rehearsal for Fire Shut Up in My Bones, Blanchard was humbled by the scale of the production.

“I never thought I’d be in a situation like this, to walk in a room and there’s like 40 singers singing something that I’d written, and they’re rehearsing it,” he says. “And then in the next room, there’s 16 dancers choreographing to a piece of music that I’ve written. And then in the other room, the principal singers are blocking—I keep waiting to wake up.”

Blanchard is a jazz composer, but he says Fire Shut Up in My Bones is not a jazz opera. Rather, he calls it “an opera in Jazz.” What he means to do, he explains, is similar to what Stravinsky did in bringing folkloric music into the classical realm. “I’m trying to take American folklore that I know, that I’ve experienced, which is jazz,” he says, “and bring that into the operatic world, but not totally use the entire piece to make a statement about jazz.”

There’s a jazz quartet embedded into the Met Orchestra for the opera, but much of the music sounds more like Blanchard’s work in Hollywood, where he has written the music for more than 40 films.

Still, Blanchard says opera presents a unique challenge. “The operatic voice is so unique, each voice,” he says. “It’s not like writing for an orchestra, or writing for a band. When you write for a quintet, you go, ‘Okay, I know what the tenor does, I know what the trumpet does, the bass. You got it.’ This, no: One baritone is so different from the next baritone, one tenor is different from another. So you always have to fine tune things for the vocalists that you’re working with.”

Fire Shut Up in My Bones is based on the memoir of the same title by Charles M. Blow. It’s about a Black boy growing up in rural Louisiana, where he rises above poverty, violence, and sexual abuse to become a successful writer.

The show was first staged two years ago by the Opera Theatre of St. Louis. For the Met production, new scenes were added, along with a chorus, and a troupe of dancers. Blanchard says the opera, with its all-Black cast and mostly Black creative team, is about much more than his music.

“It’s an interesting thing because of what it means to society,” he says. “It’s not just about me being a composer. These people understand that this production is going to make a statement about our community, and how our community has been overlooked in the operatic world. There’s not a soul in this production who doesn’t get it.”

Baritone Will Liverman stars in the role of Charles. “It’s a collective thing and we all want to do well,” he says. “And to tell this story. And just to show real authentic blackness on stage — black pain, black joy — this piece has it all. It’s such an honor and privilege to be able to sing this role.”

Much of the opera’s libretto revolves around Charles’s struggle to accept his bisexuality; he’s haunted by his attraction to men. The second act opens with a ballet featuring a dozen ghostly male dancers pairing off in same-sex embraces.

Choreographer Camille A. Brown co-directed the show. She is the first Black woman to direct an opera at the Met. “I tried to think what was my entry point into the work,” she says. “And I started thinking about a lot of the struggles some of my dearest friends who are black gay males have gone through, and what it was like for them to grow, and find their sexuality, and be comfortable in their sexuality.”

Blow, the real-life subject of Fire Shut Up in My Bones,” now works as a staff writer and op-ed columnist for The New York Times. Speaking from his home in Atlanta, Blow notes that you have to look at the significance of the Met production in two ways. “I think you have to really applaud Terence for being the first,” he says. “And then you simultaneously have to say, why is that? Is there a dearth of talent? Or a dearth of opportunity and acceptance?”

The new Metropolitan Opera season includes works by Verdi, Mozart, Wagner, Stravinsky and Puccini. Blanchard says how his work measures up is yet to be answered.

“That’s a funny question,” he says, “’cause it’s funny listening to you name all those names: Verdi, all those guys, then you say Blanchard…wait a minute, who’s that dude? I really don’t know because I feel, like Charles, my story is still untold yet. I’m just enjoying this moment for what it’s bringing to my life, because I never saw this coming. Never. Never in a million years could I see this coming.”

Blanchard says he’s not concerned with why it took so long for the Metropolitan Opera to present the work of a Black composer. He says the key question is: what happens next?