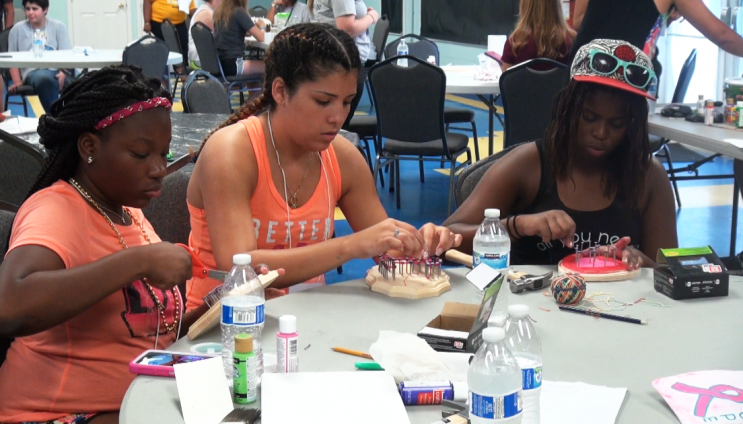 Campers at the Faces of Courage Camp for teens and young adults hang out doing arts and crafts and various inside and outside activities./Photo: Daylina Miller

With school back in session, many kids are already reminiscing about summer camp. For some, that seasonal activity may have been more than distraction from boredom. But there’s a camp where teens and young adults who are battling cancer have found a safe haven.

It’s a balmy Saturday morning at the Rotary campground in Brandon. Dark clouds are threatening to unleash the fury of a Florida summer rainstorm, so the canoes and kayaks have been packed up for the day.

Now, the teens are just hanging out. Some are getting their nails and hair done, others are doing arts and crafts. But this isn’t your typical summer camp. It revolves around this motto: cancer is serious, but camp is serious fun.

Peggie Sherry heads up Faces of Courage the organization that runs this free program. It welcomes teens and young adults ages 13 to 22 from all over Florida who are being treated for cancer or other life-threatening illnesses. It’s a chance for them to feel normal between the chemotherapy and radiation treatments.

Camp Offers Much Needed Getaway
Matthew Lambert is hanging out near the tie dye station to help kids twist T-shirts and dip them into colored vats of water. The 30-year-old counselor was diagnosed with leukemia when he was 6. He knows exactly how liberating a weekend away from the hospital can be.

Here, the nurses passing out oral chemotherapy pills and other medications wear flamingo hats and brightly colored Hawaiian shirts. And if someone scrapes their knee playing basketball? Well, they’re there for that, too.

While the kids are at camp, parents get to take the weekend off, said Peggy Sherry.

“People Who Have Similar Battles”
Activities are set up inside and around the Rotary Camp of Florida’s facility. 22-year-old Matthew Rivera is floating between the tie dye station, and a table where campers are hammering nails into shapes on wood. It’s his second year at camp.

Rivera has been fighting a brain tumor since he was 16. He says camp lets him bunk up with other young adults who have struggled to stay in school or have a normal job.

“You get to endure something with other people who are enduring, not the same thing as you, but people who have similar battles,” said Rivera

Sherry, the camp’s organizer and a two-time cancer survivor, started Faces of Courage in 2004. She runs the nonprofit with volunteers. It’s tiring, but doing hair with campers keeps her going.

Sixteen-year-old Jessica Cilme doesn’t have cancer, but her older sister Erica does.

“It’s a really good camp for like therapy for both the sibling and the kids who’s going through cancer,” said Cilme. “You don’t feel so separated because everyone else is going through the same thing and you can kinda just fit in.”

Faces of Courage doesn’t just organize the camp for teens and young adults. There are four others and one is for women of color. Two events in September are for any woman who has battled cancer. And in December, there’s a children’s retreat for kids two to twelve.

The camp doesn’t cure their cancer, said Sherry, but it does help.

“There is something about sitting up at night in a cabin with your peers and someone showing them their port or someone else shows another scare or talking about the medications they’re taking,” said Sherry.

Someday she hopes Faces of Courage can buy its own facility. That way, they can run camps all the time.