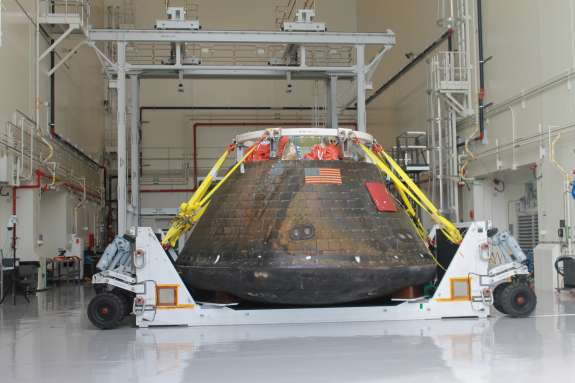 The heat shield from the Orion was just removed last week.

Orion’s heat shield is the biggest ever made, and it has to withstand temperatures of around 5,000 degrees on re-entry- about half as hot as the surface of the sun.

Kennedy Space Center Director Bob Cabana says technicians will analyze data from last December’s test flight, to see if there are “things that we could have done in the process more efficiently or that would make it easier down the road.”

“They’ve taken it apart, they’re going through the analysis, and they will look to see what changes need to be made as we move forward to make it work correctly, to make processing more efficient and to reduce cost,” says Cabana.

Lockheed Martin, which built Orion, says the heat shield could be re-designed so it’s quicker and cheaper to put together, but still able to protect the space craft.

NASA wants to send astronauts on Orion to Mars or an asteroid. Orion’s first manned mission is planned for 2021.