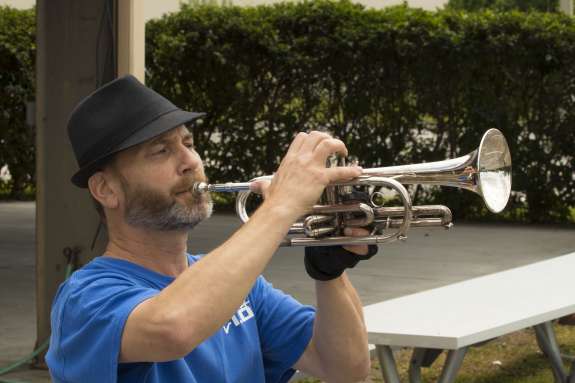 The Impact Orlando Drum and Bugle Corp are practicing on a Sunday morning. They’re a group of former competitive musicians that now play for fun at parades, festivals and conferences. They’re practicing an ensemble version of Taps.

A law passed in 2000 by Congress grants any veteran in good standing the right to have a flag folding ceremony performed at their funeral, and the playing of Taps.

But the Military is short on bugle players. Bill Slover, Impact Drum and Bugle Corp Director, said that Taps can still be played at services – even without a bugler.

“One of the things that is done at military funerals to fill that gap, or to fill those missing spots they actually have an electronic bugle. A lot of people don’t realize that when they see someone playing a bugle it’s actually an amplified device inside what is actually not a real bugle,” said Slover.

Bu musicians like Slover can tell the difference. Organizations like Buglers Across America think veterans deserve a real bugle player to honor their life and service. The group links up around 5,000 volunteer musicians – like Slover and some other members of his Corp – to families of veterans planning their funeral service. They can go online, punch in their zip code, and the site pings buglers in the area.

Even though Slover wasn’t in the military, he’s been performing Taps at funerals and memorials since his teens. “You get very emotionally involved, even if you didn’t know the person and you really want to add quality perforce to that because you know this is a memory. It’s haunting and at the same time it’s almost a relaxing,” he said.

There are just 24 notes in this haunting song, but Slover takes his role performing it seriously and he reflects on the gravity of the ritual.

“Anyone who has been at a service and heard the taps and it was for someone they knew very well, every time they hear that taps it brings back memories of not only the service, but of the individuals. So you now that’s something you want to do well, and with a lot of grace and dignity.”