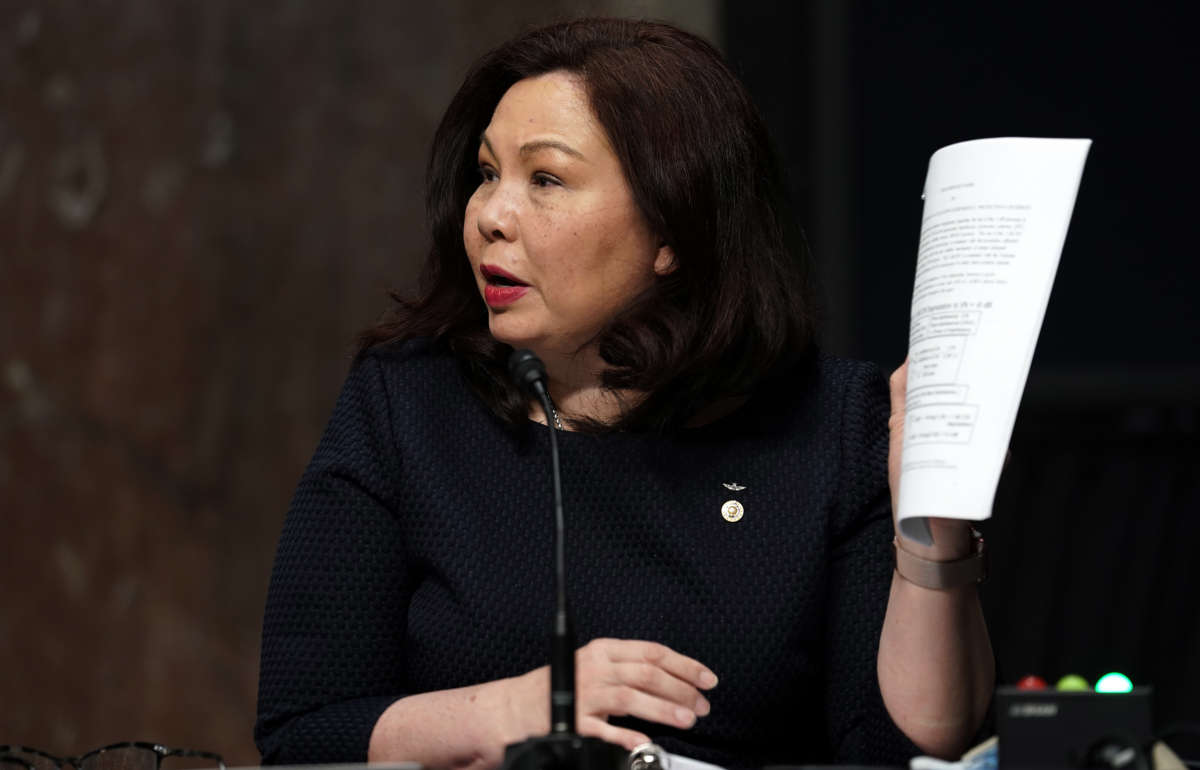 In combat and in Congress, Illinois Sen. Tammy Duckworth has seen a lot of firsts.

Now she may become the first Asian American woman nominated to be vice president for a major party in the United States. But she remains diplomatic when asked about the pressure Joe Biden is facing to pick an African American woman.

“I think that even just choosing a woman is a powerful signal that Joe Biden has made,” Duckworth told NPR’s All Things Considered earlier this month.

As Biden, the presumptive Democratic nominee for president, nears the announcement of his running mate, Duckworth’s political stock has risen.

A feud and a military hold

This month, the 52-year-old engaged in a public feud with Fox News Channel host Tucker Carlson, who took issue with her criticism of President Trump and her openness to removing certain statutes. When asked to appear on his program to respond, Duckworth declined, Carlson said.

“Duckworth is too afraid to defend her own statements on a cable news show. What a coward,” he said on his show.

Duckworth responded on Twitter, saying Carlson should walk a mile in her prosthetic legs before questioning her patriotism. (She made a longer version of her argument in a New York Times opinion piece.)

“I think he made a serious mistake and Tammy made him remember it,” Sen. Dick Durbin, a fellow Illinois Democrat and a Duckworth mentor, said of Carlson.

This came after Duckworth’s high-profile efforts to block promotions for more than 1,100 senior armed forces personnel over concerns that Army Lt. Col. Alexander Vindman, a witness in the impeachment of Trump, was facing retaliation.

A few days earlier, Duckworth — who has dubbed Trump “Cadet Bone Spurs” for his past military deferments — went after the president and his officials following reports that Russian bounties were offered for the lives of U.S. troops in Afghanistan.

Joe Walsh — a Republican who lost to Duckworth in 2012, when she first won a Illinois U.S. House seat — said his former political opponent has evolved since their race. She won her Senate seat four years later.

“Since she came to the Senate, she’s developed more of a gravitas. And you’ve really seen that play out in this last month or so,” said Walsh, a Trump nemesis who had a short-lived run for the 2020 Republican presidential nomination and is now rooting for Biden. “She’s become a leading defender of Lt. Col. Vindman. She’s become the Senate attack dog, rightly attacking Trump for not doing a goddamn thing — pardon my language — about these Russian bounties.”

Duckworth has backed off her fight for Vindman. Two weeks after announcing plans to block the promotions, she said she was reassured by the Pentagon that Vindman, who is now retiring from the military, was slated for a promotion after all.

“There’s an intensity there”

Democratic Sen. Brian Schatz of Hawaii, where Duckworth lived as a teenager and a college student, said Duckworth has illustrated a clear passion for defending servicemembers and veterans.

“I think what you want in a public leader is someone who has a throughline in terms of what they care about. And hopefully that thing that they care the most about preceded their entrance into politics,” Schatz said. “For Tammy, her passion for her fellow veterans is that throughline.”

Former Congressman Walsh said he learned the hard way that Duckworth’s sacrifice for the country helps her resist political attacks.

During their race, Walsh thought he found scandal gold with a 2009 whistleblower lawsuit during her time as head of the Illinois Department of Veterans’ Affairs. Two women said Duckworth created a hostile workplace, firing one worker and berating another. The case was settled, but Walsh said it showed Duckworth was unpolished and difficult to work with.

Her supporters reject those claims, but acknowledge she can be determined.

“When she is fighting for something, whether it’s a veteran or a constituent, get out of the way,” Durbin said. “There’s an intensity there, I’m sure of it, because I’ve seen it. But when you’re the person that she’s advocating for, you appreciate that intensity.”

But concerns about Duckworth’s political polish, combined with her thin legislative record, are negatives that could keep her from becoming Biden’s pick, Walsh argues.

Jon Soltz, chairman of the left-leaning VoteVets organization, which has close ties to Duckworth and is backing her candidacy, disagrees. Soltz argues Duckworth and Biden have much in common, especially after both have suffered horrendous tragedies. (Biden’s wife and daughter died in a car crash in the 1970s.)

“If Joe Biden is looking for somebody who will be a loyal partner we can trust, who hasn’t attacked him, who helps bring the base along, but also protects our majority and helps us take back the Senate, who is consistent with him on policy positions, Tammy Duckworth would be a phenomenal choice,” Soltz said.

He met Duckworth when she joined him as his guest to the State of the Union address. She came by way of a recommendation from Walter Reed Army Medical Center.

The veteran Army pilot was severely wounded a year earlier when her Black Hawk helicopter was struck by a rocket-propelled grenade in Iraq. Three months later, she was learning how to walk again.

“There she sat in a wheelchair, having lost both legs, her right arm in a sling,” Durbin said. “And she had this full dress uniform, this bright smile on her face, and she swept me away.”

Soon after their meeting, Durbin was ringing up the then-chair of the Democratic Congressional Campaign Committee, Rahm Emanuel. She was intrigued by politics, and within a year running her first congressional race.

Today, Durbin gets emotional when he reflects on Duckworth’s last 15 years and how she’s already generating buzz to join Biden’s ticket.

“I went to the floor of the House when she was sworn in, and [I had] tears in my eyes to watch it happen,” he said between pauses. “I think America would be so proud to have her as vice president.”