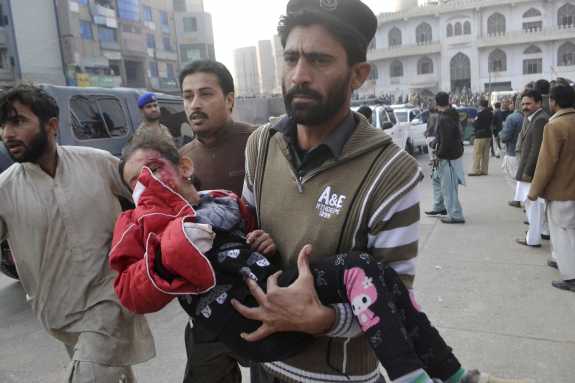 A Pakistani girl, who was injured in a Taliban attack in a school, is rushed to a hospital in Peshawar, Pakistan, on Tuesday.
Image credit: Mohammad Sajjad

Quoting Pakistani officials, multiple media outlets put the death toll at 126, including 80 students in grades 1 through 10.

The AP reports that at least six gunmen entered the Army Public School and Degree College in Peshawar shooting at random. Quickly, police moved in and traded gunfire with the militants. The AP adds:

“Pakistani television showed soldiers surrounding the area and pushing people back. Ambulances streamed from the area to local hospitals. …

“It wasn’t clear how many students and staff were still inside the facility. A student who escaped and a police official on the scene earlier said at one point about 200 students were being held hostage.”

The New York Times reports that as the standoff continued, Prime Minister Nawaz Sharif arrived in Peshawar. A spokesman for the Pakistani Taliban claimed responsibility for the attack.

The spokesman tells The New York Times that the Taliban said they were retaliating for a recent military offensive.

The Express Tribune describes the scene:

“Witnesses described how gunmen went from classroom to classroom, shooting children, after a huge blast shook the Army Public School, while some described police struggling to hold back distraught parents trying to break past a cordon and get to the school when three loud explosions went off.

“Ninth grader Kashan, son of Zaheerudin, told our correspondent, ‘We were sitting in the hall and a colonel was giving a lecture when we heard firing from the back.’

“Kashan said, ‘The sound of the firing kept moving closer when suddenly the door behind us was kicked down and two people started firing indiscriminately.’

“The ninth-grader said chaos ensued and the last thing he remembers is children and people falling to the ground. Kashan escaped but with injuries on his feet.”

Gen. Asim Bajwa, a Pakistani military spokesman, has been tweeting updates of the standoff. In his latest missive, Bajwa says that six terrorists have been killed, and children and teachers continue to be rescued.

Update at 7:12 a.m. ET. Country Should Not Lose Its Strength:

Dawn newspaper reports that as Prime Minister Nawaz Sharif arrived in Peshawar, he said the country is now experiencing the blowback of its offensive against the Taliban and other militant groups in North Waziristan.

“I feel that until and unless this country is cleansed from terrorism, this war and effort will not stop, no one should be doubtful of this. We have also spoken to Afghanistan about this and we will fight terrorism together,” Sharif said. “Such attacks are expected in the wake of a war, and the country should not lose its strength.”