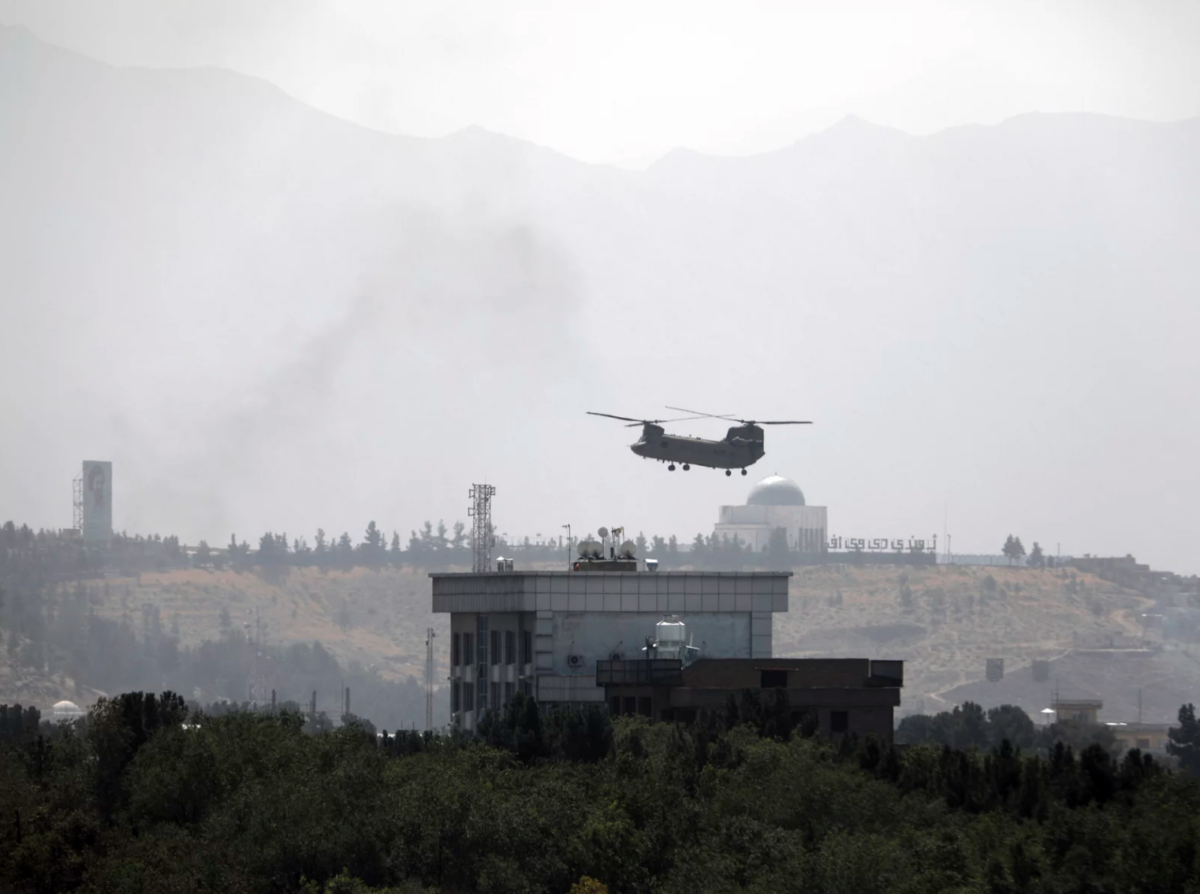 KABUL, Afghanistan (AP) — Taliban fighters entered the outskirts of the Afghan capital on Sunday and said they were awaiting a “peaceful transfer” of the city after promising not to take it by force, but panicked residents raced to leave, with workers fleeing government offices and helicopters landing at the U.S. Embassy.

In a nationwide offensive that has taken just over a week, the Taliban has defeated, co-opted or sent Afghan security forces fleeing from wide swaths of the country, even though they had some air support from the U.S. military.

On Sunday, they reached Kabul. Three Afghan officials told The Associated Press that the Taliban were in the districts of Kalakan, Qarabagh and Paghman in the capital.

Later, Afghan forces at Bagram air base, home to a prison housing 5,000 inmates, surrendered to the Taliban, according to Bagram district chief Darwaish Raufi. The prison housed both Taliban and Islamic State group fighters.

The lightning speed of the push has shocked many and raised questions about why Afghan forces crumbled despite years of U.S. training and billions of dollars spent. Just days ago, an American military assessment estimated it would be a month before the capital would come under insurgent pressure.

Taliban spokesman Suhail Shaheen told Qatar’s Al-Jazeera English satellite news channel that the insurgents are “awaiting a peaceful transfer of Kabul city.” He declined to offer specifics on any possible negotiations between his forces and the government.

But when pressed on what kind of agreement the Taliban wanted, Shaheen acknowledged that they were seeking an unconditional surrender by the central government.

Taliban negotiators headed to the presidential palace Sunday to discuss the transfer, said an Afghan official who spoke on condition of anonymity for fear of reprisals. It remained unclear when that transfer would take place.

The negotiators on the government side included former President Hamid Karzai and Abdullah Abdullah, the head of the Afghan National Reconciliation Council, an official said. Abdullah long has been a vocal critic of President Ashraf Ghani, who long refused giving up power to get a deal with the Taliban.

The official, who spoke on condition of anonymity to discuss details of the closed-doors negotiations, described them as “tense.”

“I assure you about the security of Kabul,” he said.

Earlier, the insurgents also tried to calm residents of the capital.

“No one’s life, property and dignity will be harmed and the lives of the citizens of Kabul will not be at risk,” the insurgents said in a statement.

However, a voice message circulating social media purportedly from a Taliban commander also warned “no one is allowed to enter into Kabul province.”

Despite the pledges, panic set in as many rushed to leave the country through the Kabul airport, the last route out of the country as the Taliban now hold every border crossing. Rapid shuttle flights of Boeing CH-47 Chinook helicopters near the embassy began a few hours later after the militants seized the nearby city of Jalalabad. Diplomatic armored SUVs could be seen leaving the area around the post.

The U.S. State Department did not immediately respond to questions about the movements. However, wisps of smoke could be seen near the embassy’s roof as diplomats urgently destroyed sensitive documents, according to two American military officials who spoke on condition of anonymity because they were not authorized to discuss the situation. The smoke grew heavier over time in the area, home to other nation’s embassies as well.

Sikorsky UH-60 Black Hawk helicopters, which typically carry armed troops, later landed near the embassy as well. At least one attack helicopter could be seen overhead as helicopters launched flares to distract possible missile fire. The U.S. decided a few days ago to send in thousands of troops to help evacuate some personnel from its embassy.

Thousands of civilians now live in parks and open spaces in Kabul itself, fearing a Taliban government that could reimpose a brutal rule that all but eliminated women’s rights. Some ATMs stopped distributing cash as hundreds gathered in front of private banks, trying to withdraw their life savings.

At Kabul International Airport, Afghan forces abandoned the field to Western militaries, said a pilot who spoke on condition of anonymity to discuss security matters. An Afghan flight earlier landed at the airport from Kandahar loaded with troops who surrendered to the Taliban, even after taking shrapnel damage from a mortar attack, the pilot said.

Ghani, who spoke to the nation Saturday for the first time since the offensive began, appears increasingly isolated as well. Warlords he negotiated with just days earlier have surrendered to the Taliban or fled, leaving Ghani without a military option. Ongoing negotiations in Qatar, the site of a Taliban office, also have failed to stop the insurgents’ advance.

Jalalabad, Afghanistan’s last major city besides the capital not held by the militants, fell to the Taliban earlier Sunday. Militants posted photos online showing them in the governor’s office in Jalalabad, the capital of Nangarhar province.

Abrarullah Murad, a lawmaker from the province told The Associated Press that the insurgents seized Jalalabad after elders negotiated the fall of the government there. Murad said there was no fighting as the city surrendered.

The militants took also Maidan Shar, the capital of Maidan Wardak, on Sunday, only some 90 kilometers (55 miles) from Kabul, Afghan lawmaker Hamida Akbari and the Taliban said. Another provincial capital in Khost also fell to the Taliban, said a provincial council member who spoke on condition of anonymity for fear of reprisals.

The fall Saturday of Mazar-e-Sharif, the country’s fourth largest city, which Afghan forces and two powerful former warlords had pledged to defend, handed the insurgents control over all of northern Afghanistan.

Atta Mohammad Noor and Abdul Rashid Dostum, two of the warlords Ghani tried to rally to his side days earlier, fled over the border into Uzbekistan on Saturday, said officials close to Dostum. They spoke on condition of anonymity as they weren’t authorized to publicly speak about his movements.

Writing on Twitter, Noor alleged a “conspiracy” aided the fall of the north to the Taliban, without elaborating.

“Despite our firm resistance, sadly, all the government and the Afghan security forces equipment were handed over to the Taliban as a result of a big organized and cowardly plot,” Noor wrote. “They had orchestrated the plot to trap Marshal Dostum and myself too, but they didn’t succeed.”

The Taliban also insisted their fighters wouldn’t enter people’s homes or interfere with businesses. They also said they’d offer an “amnesty” to those who worked with the Afghan government or foreign forces.

“The Islamic Emirate once again assures all its citizens that it will, as always, protect their life, property and honor and create a peaceful and secure environment for its beloved nation,” the militants said. “In this regard, no one should worry about their life.”

Despite the pledge, those who can afford a ticket have been flocking to Kabul International Airport, the only way out of the country after the Taliban took the last border crossing still held by the government Sunday at Torkham. Pakistan’s Interior Minister Sheikh Rashid Ahmed told local broadcaster Geo TV that Pakistan halted cross-border traffic there after the militants seized it.