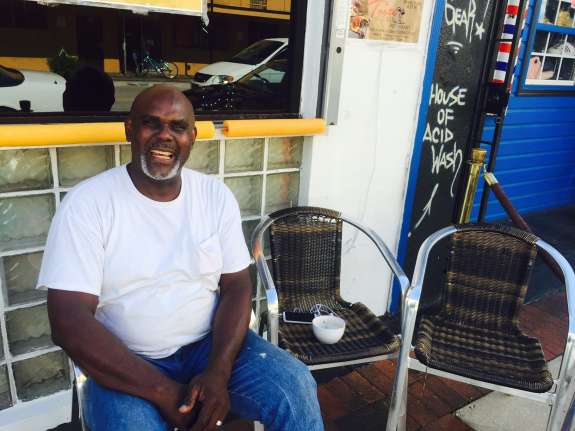 Bishop Cal Stubbs in front of his Taste of Class restaurant in Parramore./Photo by: Catherine Welch

When the city of Orlando launched a study into the historic black Parramore neighborhood, it got back some alarming statistics. One of them was Parramore’s jobless rate – nearly 24 percent. Much has changed since last year, when that number surfaced in a comprehensive plan for the neighborhood. Joining us to talk about the economic outlook for Parramore residents is 90.7’s Catherine Welch.

CRYSTAL: The study found that nearly one out of four residents were unemployed – did it say why?

CATHERINE: It did, some of the factors for the unemployment include: transportation, lack of job training, and the scarcity of educational opportunities inside the neighborhood. And to put that number into perspective … that’s compared to Orange County’s unemployment rate at 5-and-a-half-percent.

CRYSTAL: There’s a lot in there, let’s unpack it starting with education.

CATHERINE: So right now Parramore doesn’t have its own elementary school. That’s changing with the new pre through 8th grade school going in. And that school is being helped by hotelier Harris Rosen who is pouring millions of his own money into the pre-school.
I caught up with Mayor Buddy Dyer at the Parramore community garden where he pointed out that change is already happening for neighborhood kids, through the Parramore Kid Zone, an after school program started about a decade ago. “At that time not a single one of the high school seniors was going to college, now all thirty are going on to community college, university or into military service,” said Dyer.
Mayor Dyer also noted that UCF and Valencia will move in, with Valencia bringing a culinary school to Parramore.

CRYSTAL: Another factor to Parramore’s 24 percent unemployment rate is a lack of job training. But when the Amway Center was being built, the city rolled out a jobs program called Blueprint. Did that program have any impact?

CATHERINE: You talk with residents and they’ll tell you that it did at the time. While walking through the neighborhood, I met Bishop Cal Stubbs, who owns a church and soul food restaurant in Parramore. He got a job working on the Amway Center, and he says he helped about 80 people get work building it. He says a number of them used those temporary construction jobs as the first step to getting back into the workforce.
Official city numbers find 835 Parramore residents have been employed through Blueprint.
Now City Commissioner Regina Hill says she’s hopeful that the new soccer stadium and the businesses moving in will help residents, but at the same time they have to help themselves.

“First of all we have to build their self-esteem, and let them know that these opportunities that’s presented themselves aren’t for somebody else, but it’s for them also,” said Hill. “And I’ve taken them to task to say, ‘I need you to assist me to go get it.’ So we’ll bring the opportunities to you but I’m encouraging them to be a part of the change that they hope for.”

CRYSTAL: A comprehensive plan for Parramore highlighted a lack of transportation as a barrier to employment for residents. What’s being done to connect them with jobs across the city?

CATHERINE: Last year Lynx rolled out the Lymmo Grapefruit line, that’s a free ride connecting Parramore to the central business district and other bus routes. Another free bus line called the Lime Line will start rolling next year, which will connect Parramore residents to SunRail. Granted, the bus isn’t always the fastest mode of transportation, but it’s something.
Bishop Stubbs, the gentleman I mentioned earlier with the church and the restaurant. Part of his mission is getting residents jobs. He told me about one young man he introduced to a staffing company.

CRYSTAL: It sounds like the barriers to employment are being addressed in Parramore.

CATHERINE: It seems right now that the city is focused on lifting up the neighborhood. Although critics say they’re not doing enough, and attention only comes when a sports complex moves in. But as Mayor Dyer told me, Parramore is a journey, something the city will constantly be working on.