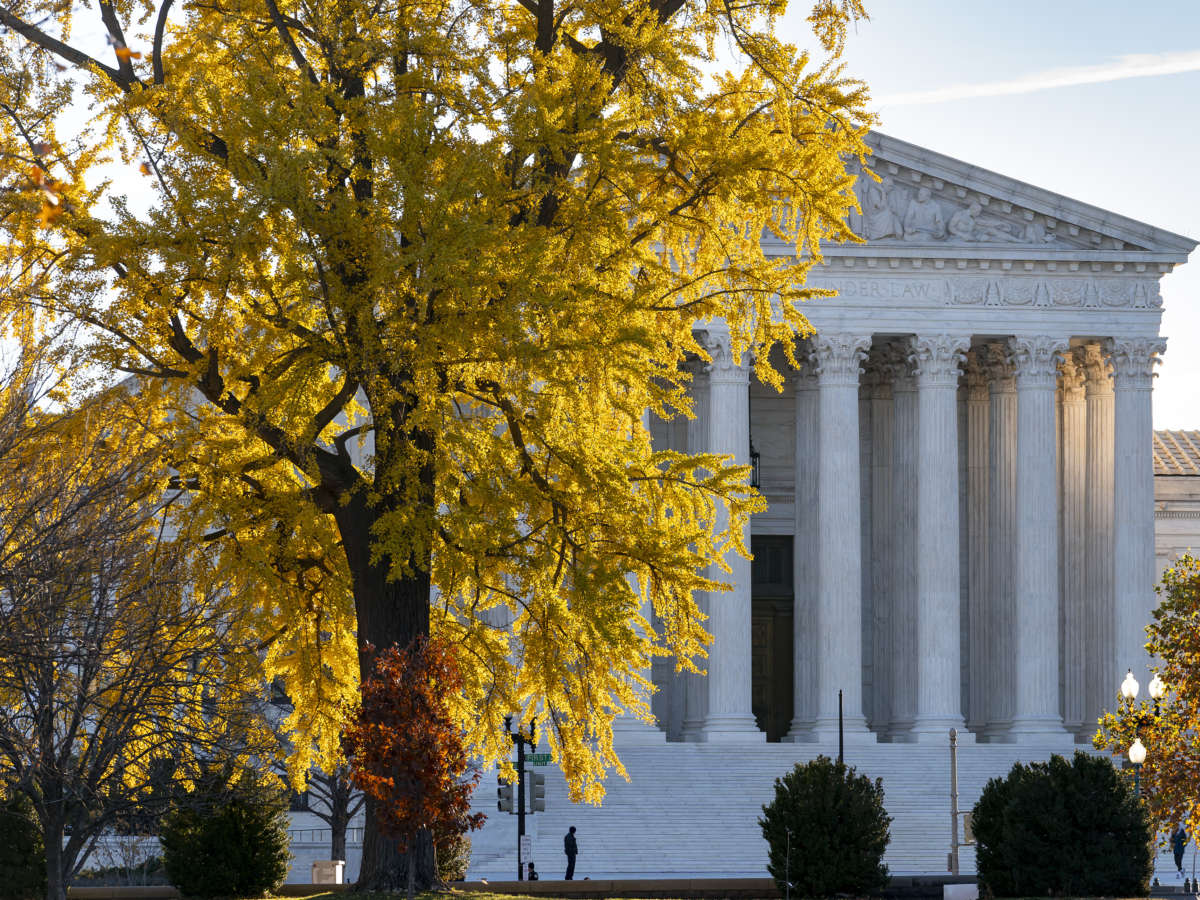 The U.S. Supreme Court, seen here in Washington, hears arguments Wednesday in a case from Maine that involves religious schools and tuition for students who go there.
Image credit: J. Scott Applewhite

The U.S. Supreme Court hears arguments Wednesday in a case that could greatly expand state aid to religious schools. On one side are proponents of the school choice movement, and on the other is the state of Maine, which is defending the way it provides what it calls a public education for children.

In recent years, the Supreme Court’s conservative majority has whittled, and sometimes hacked away at the Constitution’s wall of separation between church and state. That has been nowhere more apparent than in cases dealing with religious schools. In a series of cases, the court has upheld state-funded voucher programs for religious schools and in a case from Montana last year, the court partially rendered ineffective state constitutions that ban state aid to religious schools.

Now comes a new wrinkle presented in a case from Maine, a state with 180,000 schoolchildren spread out over a rural state, and where more than half the school districts have no public high school. To deal with that, 175,000 of Maine’s students go either go to their local public school, or the state contracts with a nearby public school to take them and provide transportation if necessary.

And then there is a third category, which is what Wednesday’s case is all about.

When it comes to public education, Maine is something of a unique animal, with only Vermont having a similar program. The state has 11 private schools, all non-sectarian, most of them on the green in their town centers, attended by a total of about 4,800 students. The vast majority of these students come from districts that have no public school. So the state pays the tuition for between 82% and 99% of the students attending these private non-sectarian schools, and the amount it pays — a bit over $11,000 a year — is the average cost of educating a public school student in the state. The state pays the same amount for an additional 200 youngsters attending other non-sectarian private schools, including one student right now who attends a prep school in nearby Massachusetts. But what it does not do is pay tuition for religious schools.

Two families have challenged this system, contending that their children should be able to attend religious schools and have the state pay their tuition, too.

Amy and David Carson’s daughter went to Bangor Christian School from kindergarten through high school, even though their town does have a public elementary and middle school. But because the town does not have a high school, they contend the state should pay for their daughter’s tuition at Bangor Christian, a school that advertises itself as “biblically based,” with religion “integrated through all content areas.”

Amy Carson explains that “they have Bible class every morning. It’s the first class of the day and Thursday is chapel day. Those are not things that are optional for the kids to choose…If you send your kids there, that’s what they learn.”

For that reason, the state of Maine says Bangor Christian and other religious schools are not eligible for state tuition payments. Maine law provides tuition assistance only to public schools and those non-sectarian private schools that provide “substantially the same education provided in the public schools.”

Maine Attorney General Aaron Frey outlines the state’s policy: “Instruction that inculcates, instills, imbues a particularly religious view through its materials, through its teachings, prescribing that there’s one religion above others and that there are certain ways of the world that are consistent with that religion…is not consistent with a public education.”

A federal appeals court panel that included retired Supreme Court Justice David Souter, agreed, concluding that Maine’s tuition program does not act as a penalty for religious exercise; it merely declines to subsidize it.

What the families say

But lawyer Michael Bindas, who represents the Carsons and another family, will tell the Supreme Court that Maine’s policy does amount to discrimination based on religion, and does deny the families their right to the free exercise of their religion.

“Maine provides tuition to families to use at the school of their choice, whether it’s public or private, in-state or out-of-state,” Bindas told NPR. “But there is one thing that the state prohibits, and that is a parent’s choice of religious school. Once the state provides a benefit in the form of tuition to use at private schools, it has to remain neutral as between religious and non-religious private schools.”

Maine’s response is that the tuition program for students in districts with no high school is not a school choice program, or a voucher program, or a scholarship tax benefit program. Maine contends that the program is a delivery system to aid students who have no public school in their district and no public school that the state is able to contract with for the children to attend.

The state is not discriminating against religion, says Attorney General Frey; it is only in the market for a public education or its equivalent in non-sectarian private schools.

“This is doing the best we can under the rural nature of Maine to make sure that all children in Maine have a doorway to access public education.,” he told NPR. And Frey points out that as of next year, under Maine law, private non-sectarian schools must have the same curriculum as the public schools.

The position of the schools is unclear

Bindas, the lawyer for the families, does not deny that the schools at the center of this case are religious. “This case is about whether the U.S. Constitution allows a state to bar a parent’s choice of school simply because the school is religious,” he contends. “We believe that parents should be free and trusted to choose the schools that are best for their kids.”

Maine counters that many of the state’s laws and regulations governing public schools–and the private schools that do qualify for tuition payments–run counter to the teachings of religious schools in Maine. Laws, for instance, that ban employment discrimination against gay teachers, students, the children of same sex couples, and laws that ban discrimination against children or parents of another faith.

Bindas dodges that issue, saying it is not presented in this case.

But for the religious schools, accepting the state’s money may be a deal breaker, precisely for this reason. It is not at all clear from the record in the case whether the schools are willing to accept state tuition payments if the state can regulate them in the same way that nonsectarian private schools are regulated.

Still, a decision in favor of the parents could open up a whole new pathway for parents to get taxpayer funds for religious schools. That is the ultimate goal of the school choice movement, and the current Supreme Court conservative supermajority just may lend a helping hand.