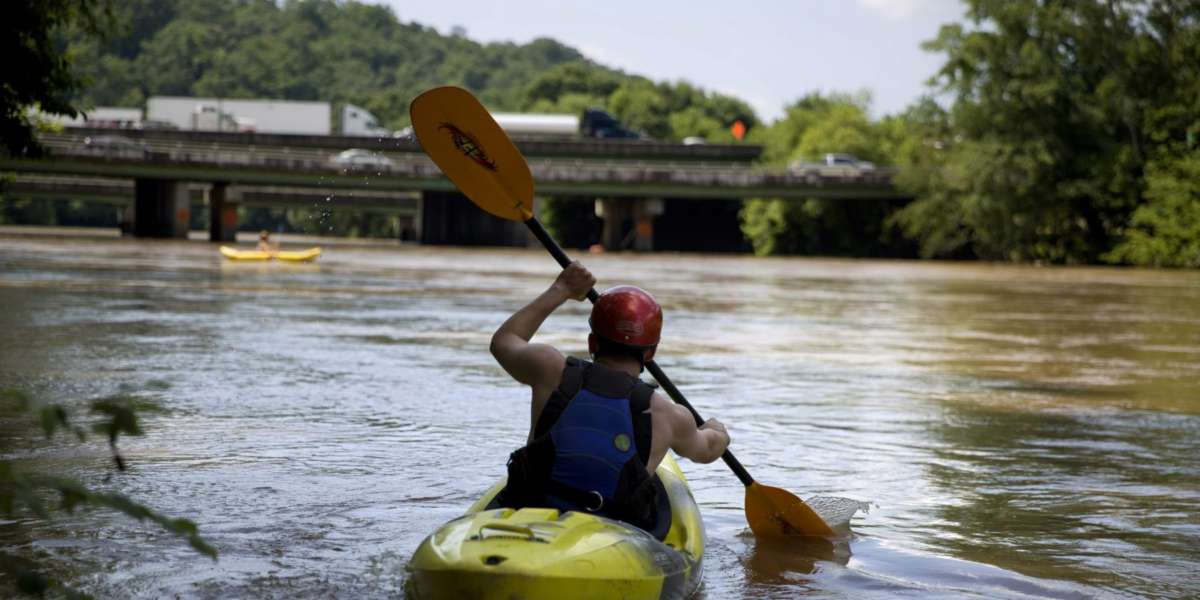 The Chattahoochee River, the main source of water for the metro Atlanta area, is also involved in this litigation, though the water suppliers in the area have worked to become more efficient and reduce per capita water use. Photo courtesy WABE/The Associated Press

The Flint River starts from springs near the Atlanta airport.

It grows as it flows south from there, and eventually rushes right along Casey Cox’s farm, in Camilla, in Southwest Georgia.

“We have a really high, muddy, winter river right now that we’re standing beside.”

A thick old live oak tree grows on the river bank. Other trees are partially submerged by the high water.

She says this river is special to her. She grew up on it, and her love for the Flint is part of what brought her back to her family’s farm after college.

“In the summer it’s really low and clear and beautiful, and there’s a sandbar there, which I love.”

Cox is 29 years old…. Which means, that for pretty much as long as she’s been alive… Florida and Georgia have been fighting over the water in this river.

She says her dad was really involved in advocating for Georgia farmers in the water wars, earlier in HIS career.

“Now he’s transitioned that over to me along with the farm, so it’s just really unbelievable to think that we’re going into the second generation of these water issues.

Florida and Alabama say Georgia uses too much of the water in the rivers that the states share.

Right now, the main case in this fight is a Supreme Court lawsuit, brought by Florida against Georgia.

Florida says, in times of drought, Georgia’s water use has affected the environment along the Apalachicola River in the Florida Panhandle. The state says that’s contributed to the crash of the oyster population — and the oyster INDUSTRY — in Apalachicola Bay.

So Florida is asking the Supreme Court to put a cap on Georgia’s water use during droughts.

And it’s come to focus on the amount of water used by Georgia farmers in the Flint River Basin — farmers like Casey Cox.

“My entire future is in agriculture and farming alongside this river, so I have to have access to water for irrigation, to give me certainty for the future, to have a strong livelihood going forward.”

Farmers say limiting their water supply would have ripple effects in the region.

“I hate to use the word cataclysmic. But it’ll be significant.”

Murray Campbell grows cotton and peanuts on the other end of Mitchell County from Cox’s farm. He says if he was told, for instance, he had to cut his water use in half, he might just decide to put it all in one crop.

“So you cut your potential for income in half, you’re going to have to cut back on something. You may have to let a man go that’s been working for you for 20 or 30 years, you might not can afford that much labor. It’ll just roll through the economy.”

And not just the local farm economy.

Doug Miell is an advisor to the Georgia Chamber of Commerce. He says if Florida wins the case, a cap on Georgia’s water use could affect Atlanta’s water supply from Lake Lanier.

And the economic impact would go beyond rural communities… because agriculture is the biggest industry in the state.

“There is no question it would flow across the entire community, and the entire state. People would be displaced.”

Georgia has argued in this Supreme Court case that any potential solution for Florida wouldn’t be worth the economic harm to Georgia. It also says Florida itself is partially to blame, for allowing overharvesting of the oysters after the BP oil spill.

Two experts hired by the court to manage this case and make recommendations have sided with Georgia.

For her part, Casey Cox says she understands what people in Apalachicola are going through. She says the oystermen there, and farmers here in Georgia have a lot in common — facing shared challenges.

“We’re all impacted by drought. We all depend on these natural resources for our livelihoods.”

Cox says she hopes the states can STOP suing each other, and instead find a way to work together to find solutions.

The oral arguments are Monday morning.

Even once THIS case is over… there’s another one, brought by the state of Alabama… over some of the same water.