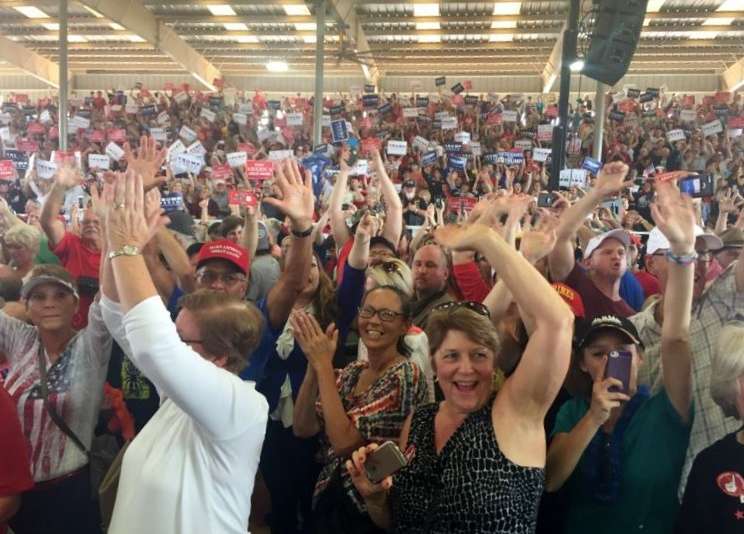 Supporters at a Donald Trump Rally in Ocala, FL, four weeks ahead of the November election. Photo: Renata Sago.

With four weeks before the election Donald Trump is hoping to woo central Florida’s undecided voters with promises of radical change. As part of a four-city Florida tour, the Republican presidential candidate held a rally in Ocala that drew thousands.

“Is there anybody in here not registered?” he asked the crowd of pastors, business owners, retirees, and students at the beginning of his one-hour speech.

“If you’re not registered, get the hell out of here, ok? Leave right now and go and register.”

Trump went on to sharply criticize Democratic candidate Hillary Clinton for being a career politician, citing data recently released from Wikileaks. He then pledged economic revival with tax cuts and boosts to small businesses. Supporter and longtime Republican John Gerrone believes jobs are what will drive undecided voters to cast ballots for Trump. He says the United States is suffering because of career politicians on both sides of the aisle.

“All they’re concerned about is their own selves. It’s a bunch of bologna. I’m 73 years old and you, know, I’m tired. I’m glad I’m on the back side of life because if it keeps going on the way it’s going, I don’t want to be around here.”

For Leon Smith, who came to the rally with his 5-year-old and 8-year-old daughters, Trump’s appeal is his message of “leveling the playing field” regardless of race or class. The Black Republican from Indiana believes sharp criticism of establishment politics will lead frustrated unaffiliated voters to cast ballots for Trump.

“People are starting to see just in the last debate that Hillary is part of the establishment. I think people are tired of that. People want to see change, and right now, what Trump offers is change.”

Trump stopped in Lakeland Wednesday afternoon and will wrap up his four-city Florida tour in West Palm Beach Thursday.