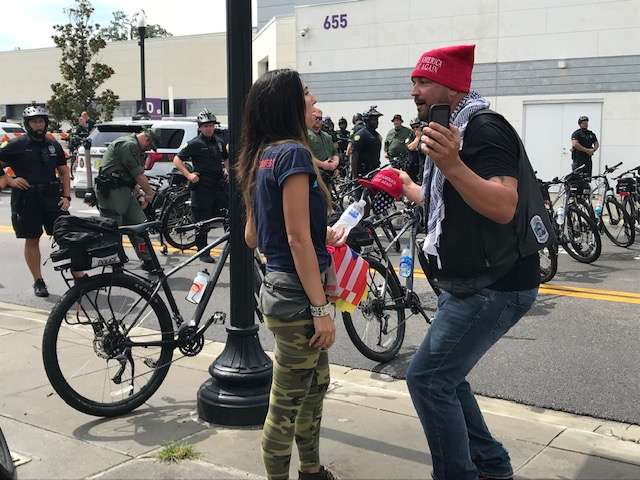 Things got heated as Trump protesters and counter protesters chanted at each other across a line of police outside the Stonewall bar in Orlando Tuesday.

The situation was momentarily diffused by an interaction between two members of the opposing groups.

Snow was getting angry that he wasn’t allowed to cross the line until a protester decided to talk to him.

“You know what I mean, she’s cool. She’s beautiful too. You’re going to let me in? She said I could come in,” said Snow.

Alexandra Ale with nonprofit Alianza for Progress was that protester. Ale said the dialogue shows the importance of reaching across ideological dividing lines.

“I feel like maybe they have the wrong idea of the groups that don’t support Trump. Sometimes I think we need to open a dialogue a more amicable dialogue.”

Police maintained a strong presence throughout the afternoon and evening in the lead up to Trump’s re-election campaign rally at the Amway Center.

Protesters Holding Impeach Trump signs listened to mariachi music near a 20-foot baby Trump balloon. Zena Velasquez who was wearing a Mexican flag said she was there to protest Trumps immigration policies.

Zena Velasquez, who was wearing a Mexican flag, said she was there to protest Trump’s immigration policies.

Hundreds of counter protesters rallied behind the police line only blocks away from the Amway center. They held signs saying love trumps hate  and held rainbow flags.

There were representatives of local nonprofits like Allianza for Progress, and there were families like mom Sherri Smythe her husband Eric and their four kids.

“The people [are] supposed to be the power of the United States and they have a voice,” said Smythe.

“And no matter how much or how loudly a president or anybody else yells, they can still be more powerful, they just have to keep standing up with other people that think and believe the same values that they do”

A police presence continues to be strong outside the protest.

Tiseanna Walwin and her fiance Keith live downtown-and said they weren’t supporting either side but had come to observe the commotion.

“This is not a racial war in any way it’s about integrity and morals. And right now both parties are showing they don’t have either.”

Walwin said the large police presence made her feel safe

Counter protesters are arriving before speeches that begin at 5 pm.

A line of police officers formed a barrier with bikes to keep a group of about 40 men wearing Proud Boy shirts from entering the protest area.

The Proud Boys is a far-right neo-fascist men’s organization that promotes political violence.

Things got tense as police officers allowed Trump Protesters to enter and leave freely, but not the men in MAGA hats.

The Proud Boys dispersed after a few minutes, except for a man in a Trump bandanna with a chain wallet.

He continued to yell at police about free speech a few minutes after the rest of the crowd had left.

90.7’s Danielle Prieur reports the Proud Boys have arrived outside a protest area near the rally, but say they won’t be going inside the protest area.

Proud Boy speaks with a member of counter protest Allianza for Progress asks if they’ll be let inside @wmfeorlando pic.twitter.com/MvRJ3PBm3Z

Proud Boys walking toward the protesters and police line pic.twitter.com/9IQlSbDvEi

The rain hasn’t put a damper on supporters gathered outside the Amway Center waiting for President Trump’s campaign announcement.

They are wearing USA ponchos with MAGA hats, and playing with beach balls while huddled under umbrellas. Trump gear is being sold on every street corner.

A line of hundreds of supporters is wrapping around the Amway Center while hundreds more are waiting outside by a stage and screen at what’s been dubbed the 45 fest.

There’s a strong police presence but things are quiet, except for the sounds of ‘We are the champions’ blasting into the crowd.

A counter protest is expected to start later on nearby church street.

Supporters of president Trump are gathered outside the Amway Center for the president’s “45 Fest”, ahead of his official re-election campaign launch this evening.

Thousands of people are lining up to see President Trump kick-off his 2020 campaign.

Jay J Rodriguez, the National Chairman of the Hispanic Republican Organization, says immigration is the number one issue for him.

“We want legal immigration. Also, we need to push for reforms for immigration,” said Rodriguez.

“Also, we want to make sure that Venezuela is free, Cuba is free, and that we register voters here in Florida.”

Supporters of President Trump gather outside the Amway Center ahead of his campaign kickoff. Photo: Jordyn Markhoff, WMFE

Rick Fox, of Orlando, said he thinks Trump chose to kick-off his campaign in Orlando because it’s a stronghold for Democrats.

“So we gotta turn this area red,” said Fox.

“It’s very blue and it’s a divisive area. Decisive and divisive. And we really need to turn it red, so that’s why he’s here.”

President Trump tweeted on Monday that over 100,000 people had requested tickets for the event. The Amway Center capacity is 20,000.

The fest includes food trucks, music, and large screens that will show his speech starting at 8 pm.