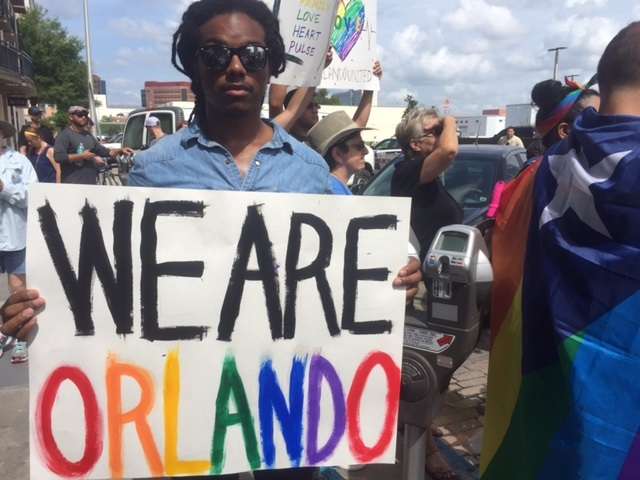 Hundreds of supporters showed up to counter a protest at a victim's funeral./Photo: Catherine Welch

When news broke that members of a Kansas-based church who protest funerals were to show up in Orlando, groups instantly appeared on social media ready to mobilize thousands of counter-protestors.

Four members of that Kansas church arrived Saturday morning for the funeral of a Pulse shooting victim. And hundreds gathered at the Cathedral of St. Luke’s to support the family of Christopher Andrew Leinonen as they paid their last respects.

A line of motorcycles rolls into a downtown parking lot where about 30 members of a motorcycle club gather before the funeral. Shane Huntsman rode in from Tampa.

“We’re here from all over the state of Florida to support Orlando and the families of the fallen,” said Huntsman. “We’re welcomed guests, and we’re going to be escorting the family to make sure they don’t get interfered with.”

Around the corner, in front of The Cathedral of St. Luke, about 50 supporters gather quietly in front of the church entrance. Standing vigil in support of the friends and family that will soon fill the sanctuary.

Down the street, a large group of supporters marches silently by holding signs and banners that say “Orlando One Love” and “Love Wins.” They pass a line of officers guarding the church. The supporters position themselves on Orange Ave., just two miles from the Pulse Nightclub, waiting for members of the Westboro Baptist Church to arrive to protest the funeral by yelling anti-gay statements.

“Our border is here, so respect the funeral, respect the police. We’re here for a good thing, let’s make it good, ok?”

Almost every one of the dozens of supporters I spoked with either knew someone who died in the shooting or knew someone who knew a victim. Randy Horne has friends who lost someone. Draped in flags both American and rainbow, he came because he felt like he had to do something.

“You do what you have to do everybody is unique. Some people want to hole up and be alone, and that’s okay if that’s what you need to do,” said Horne. “But I think we get energy from others and our community is stronger than it’s ever been and this beautiful crowd shows you that.”

Then The Angels Arrived

Draped in white, a dozen or so members of Orlando’s theater community wear expansive wings on their backs made of large, white sheets of cloth. Supporters thanked them.

Standing wing tip to wing tip the angels create a curtain between the Kansas church members and the victim’s loved ones.

Jim Hellsinger is one of those angels. “And the idea was to peacefully, give support and block any hate with love.”

With their wings, the angels block the view of four church members standing on a corner, holding anti-gay signs and yelling epithets. Every time they start up, the crowd drowns them out softly with song.

Though large in size, the crowd is relatively silent. Once or twice someone shouts out “Orlando Strong” and when cheering erupts, the crowd is shushed and reminded that this is a funeral.

After 45 minutes, the four church members leave. The crowd chants O-P-D in appreciation for the line of police standing between the supporters and the Kansas church members.

Chris Linde felt sadness as we watched the protestors. But his feelings changed when he turned to the crowd of supporters he felt overwhelming happiness. “It gives you hope that this will succeed even though there will be bumps in the road.”