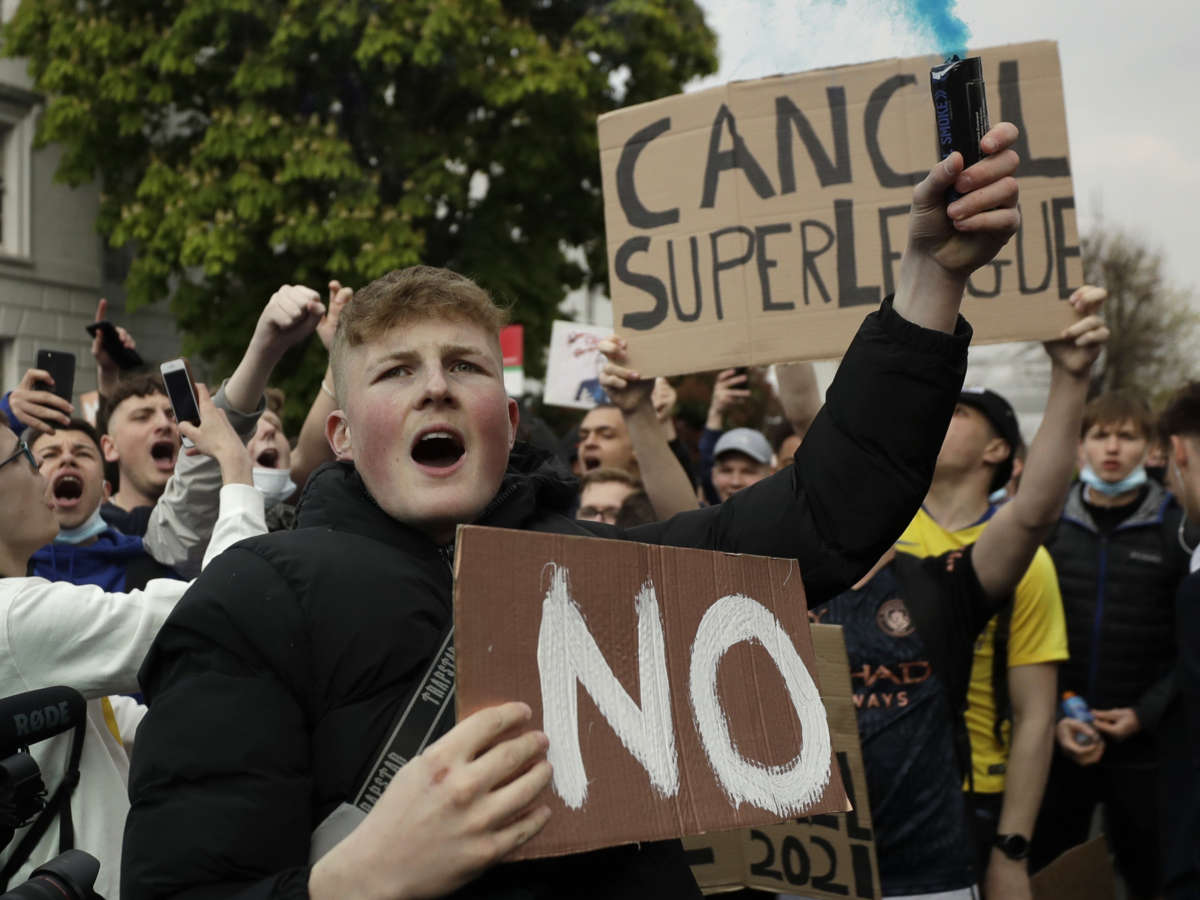 Chelsea fans protest outside Stamford Bridge stadium in London, against Chelsea's decision to be included amongst the clubs attempting to form a new European Super League.
Image credit: Matt Dunham

Plans for a new Super League in European soccer collapsed after half of the groups’ founding members said they were splitting from the project just two days after it was first announced.

The 12 founding clubs announced Sunday their plans to create a rival to the existing Champions League in European soccer.

But a swift onslaught of criticism from fans and threats from the sports’ governing bodies, Union of European Football Associations (UEFA), as well as the English, Spanish, and Italian soccer federations spooked six of the world’s richest soccer teams.

Manchester City, Chelsea, Manchester United, Arsenal, Tottenham Hotspur and Liverpool announced Tuesday they changed plans and would not join the Super League. Soon after Inter Milan said it was out, too.

Super League founder and Juventus chairman Andrea Agnelli told Reuters on Wednesday that the league can longer go ahead in the wake of those clubs’ departure.

The Chelsea Football Club said of its decision, “Having joined the group late last week, we have now had time to consider the matter fully and have decided that our continued participation in these plans would not be in the best interests of the Club, our supporters or the wider football community.”

That decision likely had something to do with the thousands of British fans who let their hatred for the Super League plan known.

On Tuesday, more than 1,000 Chelsea fans blocked traffic outside of Stamford Bridge Stadium and blocked the team bus.

Some Liverpool fans were also seen setting a team jersey on fire ahead of their team’s match at Leeds United.

The new competition was pitched as a necessary change following the global pandemic which, the Super League founding partners said in a statement, “has accelerated the instability of the current economic model of European football.” The main focus seemed to also be over the fairness of splitting billions of dollars of global television and commercial rights.

Fans and other critics accused the teams of greed.

He tweeted, “This is the right result for football fans, clubs, and communities across the country. We must continue to protect our cherished national game.”