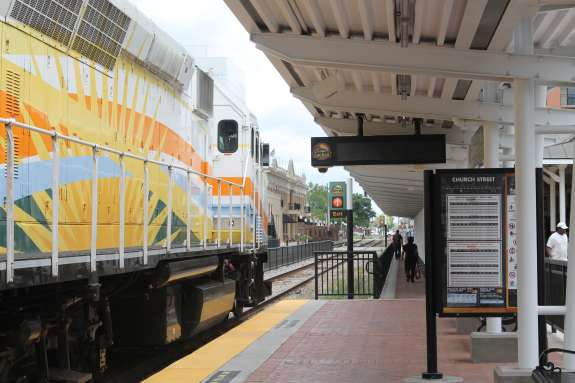 More than a million people have taken Sunrail trains between DeBary and Sand Lake Road since last May. Photo: Renata Sago.

Officials behind Central Florida’s commuter train, Sunrail, are trying to get downtown Orlando businesses on board with the service as it expands, citing growing ridership as the only way for the one-year-old service to stay on track. New data show the number of passengers fluctuates each month, with the highest number of riders so far in March.

Florida Department of Transportation spokesman Steve Olson said the number of riders goes up when there’s a big event downtown.

“But they tend to flatten out when there’s not a venue or something when they can take the train to and from it. The challenge is how do we grow the system.”

“Is there a way where you can help your employees get to work on time, avoid the congestion on some of the roads there, and take the Sunrail system—rather than you paying for spaces in a parking garage to lease those?” he said officials are asking.

More commuters would mean more funding as the system expands seventeen miles south from Sand Lake Road to Poinciana. The Florida Department of Transportation will sign a grant agreement with the Federal Transit Administration next week to cover half the cost of the $186.9 million dollar project.

So far two businesses have agreed to partner with Sunrail in offering employees commuter incentives.