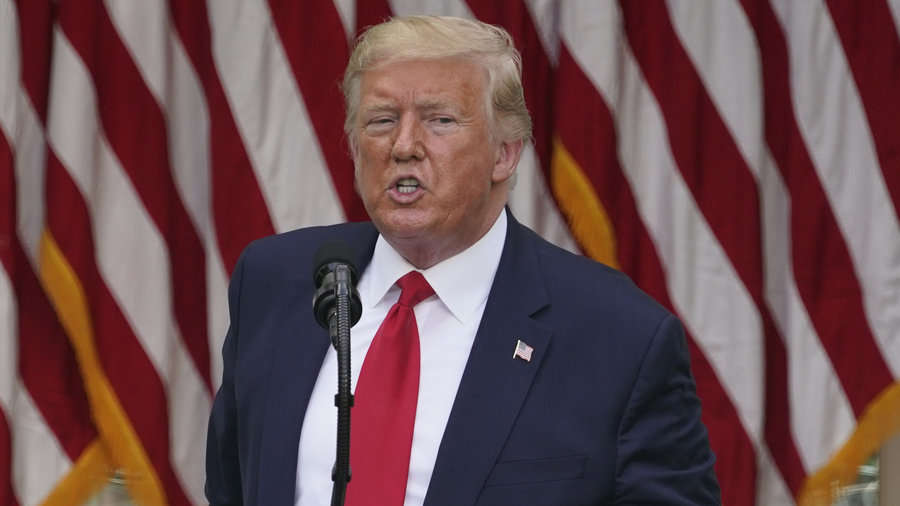 “We’re here today to defend free speech from one of the gravest dangers it has faced in American history, frankly,” Trump said from the Oval Office. “A small handful of powerful social media monopolies control the vast portion of all private and public communications in the United States.”

The president said the tech companies have “unchecked power to censor, restrict, edit, shape, hide, alter” a large sphere of human interaction. “They have points of view,” Trump said.

But legal experts were doubtful the move would have any practical effect on the tech giants. Legal observers described the action as “political theater,” arguing that the order does not change existing federal law and will have no bearing on federal courts.

The president’s latest confrontation with Twitter was set off after the tech company placed fact-checking warnings on two of his tweets that claimed, without evidence, that casting ballots by mail allows for voter fraud. That position comes in the face of voting by mail having been used for years in both Democratic and Republican states without reports of widespread fraud.

Trump lashed out at Twitter, comparing the fact-checking labels to censorship and accusing social media giant of stifling conservative voices, though the president did not provide any examples to back up that claim.

Trump, who often uses Twitter as a megaphone to tout his victories and blast his critics, responded to the fact-checking labels by threatening to shut down the social media companies, despite not having the sole authority to do so.

Regulator: Turning the FCC into “the President’s speech police is not the answer”

The White House order takes aim at a 1996 law passed by Congress that has often been at the center of political fights over regulating speech on social media platforms: Section 230 of the Communications Decency Act.

The law protects Internet companies from being sued or prosecuted over content that appears on their platforms and allows for content moderation, determining when a post should be removed, to be left up to the internal rules of companies like Twitter and Facebook, provided those decisions are made “in good faith.”

Courts have repeatedly upheld the law in favor of technology companies, even when the statute was used to defend websites advertising children who were forced into sex trafficking.

Trump’s order seeks to chip away at that protection by offering a new interpretation of the law. The order argues, in essence, that if the social media companies restrict certain voices on their platforms, the companies should be stripped of their legal immunity, opening the doors to a wave of lawsuits over content seen as defamatory.

Legal experts greeted the order with heavy skepticism, saying, absent a new law passed by Congress, the order would not be legally binding.

“It flies in the face of 25 years of judicial precedent, that has been federal precedent in almost every circuit court,” said Kate Klonick, a law professor at St. John’s University School of Law in New York. “It’s not the role of the president to interpret federal law.”

To Klonick, the order was “a very, very clear piece of political theater,” she told NPR, adding that the action is “unlikely to have any kind of weight or authority.”

The order directs the Federal Communications Commission to start a rule-making process to clarify when social media companies should keep protections under the law.

In part, they wrote, because the FCC only exerts limited control over social media companies,which are not regulated like traditional broadcasters. And historically, the FCC have been opposed to social media regulation, White and Allen noted.

Already, some of the five members of FCC are expressing about the White House’s action.

“This does not work. Social media can be frustrating. But an Executive Order that would turn the Federal Communications Commission into the President’s speech police is not the answer,” Jessica Rosenworcel said in a statement. “It’s time for those in Washington to speak up for the First Amendment. History won’t be kind to silence.”

The ACLU’s Senior Legislative Counsel Kate Ruane called the order an attempt to punish social media companies for posts that displease the president.

“Ironically, Donald Trump is a big beneficiary of Section 230,” Ruane said. “If platforms were not immune under the law, then they would not risk the legal liability that could come with hosting Donald Trump’s lies, defamation and threats.”

Backers of Trump’s order, like Republican Sen. Josh Hawley (R-Mo.) say adding warning labels to the president’s tweets is an editorial decision that shows the social media platform is acting more like a publisher than an Internet forum, saying the company should lose its special protection.

“It makes little sense to treat companies that publish their editorial comments about others’ content as if they are mere distributors. Companies that act like publishers should be treated like publishers,” Hawley wrote in a letter to Twitter CEO Jack Dorsey.

She said the executive order does not address the proliferation of disinformation on social media, an issue that was central in the 2016 presidential election and one that’s expected to be influential in November.

“Again and again, social media platforms have sold out the public interest to pad their corporate profits. Their business model is to make money at the expense of the truth,” Pelosi said.