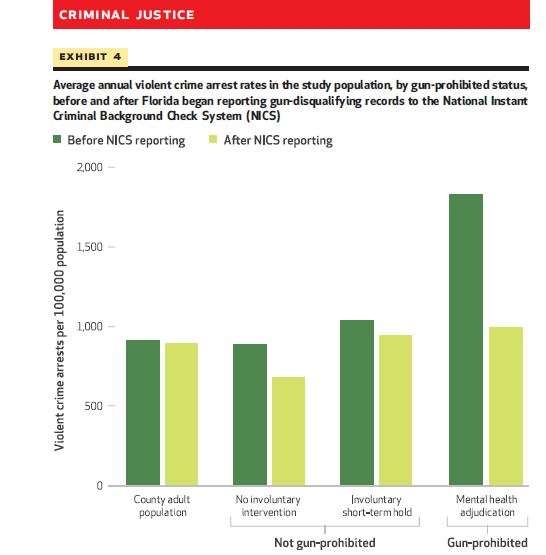 Researchers followed more than 81,000 Floridians with serious mental illness and compared them to the general population.

Keeping guns away from those with serious mental illness could help reduce gun suicides.

That’s according to a new study out this week in the Health Affairs journal that looked at more than 81,000 adults in Florida with serious mental illness. Researchers got data on residents in Tampa and Miami with schizophrenia, bipolar disorder and major depression who received care in a publicly-funded health care setting; that data was married with court records and health records.

They followed the seriously mentally ill group for a decade, comparing them to the general Florida population at the time. Those with serious mental illness were more likely to commit violent crimes than the general public – but they were much less likely to commit those crimes using a gun. And the vast majority of those who did commit violent crimes were already disqualified from owning a gun, mostly from previous felony arrests.

By contrast, more than 70 percent in the study owned a gun legally when they committed suicide. Duke University professor Jeffrey Swanson, who helped conduct the study, said many people don’t realize that two thirds of the 33,000 gun deaths in the U.S. each year are from suicide – but the issue of restricting those with mental illness from buying guns tends to come up after a mass shooting.

“It kind of is a red herring,” Swanson said. “Because even if we were to be able to cure mental illness tomorrow, which would be wonderful, our overall problem with violence would go down by about 4 percent. Because that’s the attributable risk, according to epidemiological studies.”

Swanson said laws looking to prevent gun suicides would have more impact, and ;awmakers should focus on suicide when it comes to people with mental illness accessing guns. He pointed to a law in California that can temporarily remove guns from the home of someone a judge finds could be a threat to themselves or others.

Listen to the audio for a longer interview with Swanson, and check here to read the abstract of the study.