Study: Plastic Baby Bottles Shed Microplastics When Heated. Should You Be Worried? 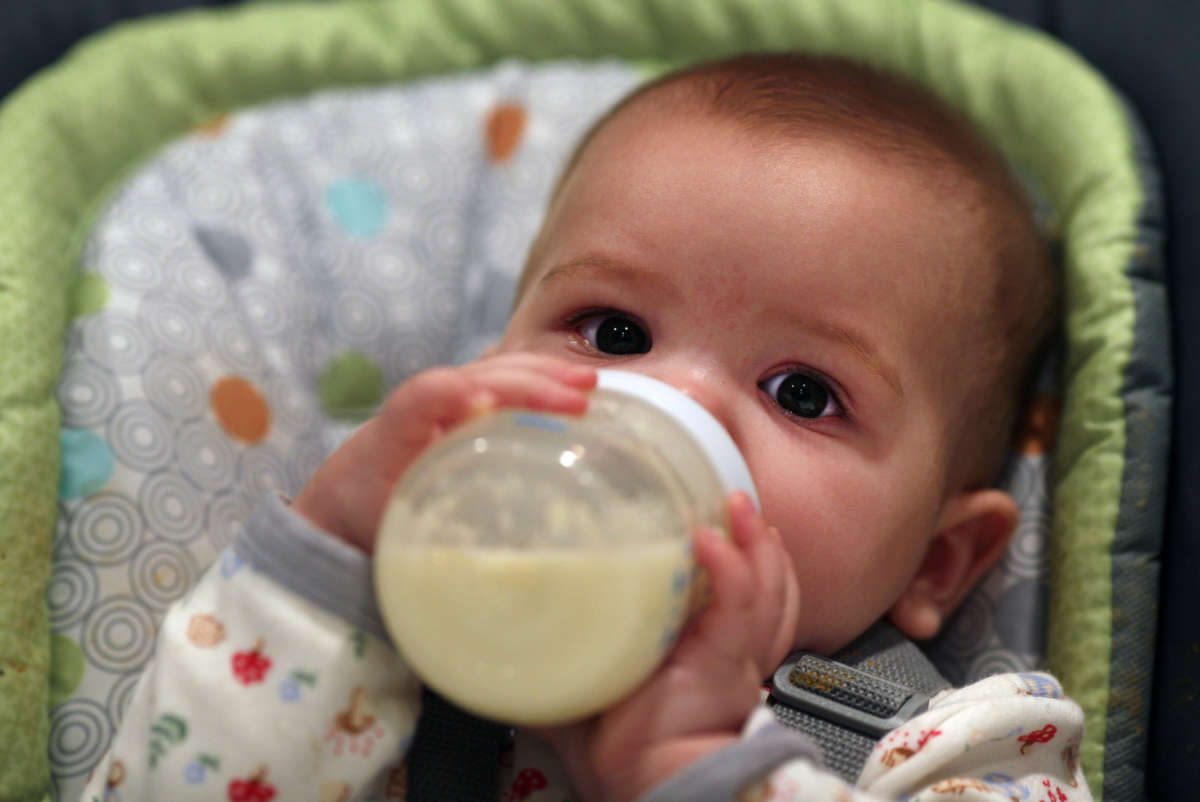 Microplastics are tiny fragments of plastic, often too small for the eye to see. They’re created as plastic degrades.

They’re in oceans, thanks to plastic garbage. They’re in fish. They find their way into the water we drink in various ways, from surface runoff and wastewater effluent to particles deposited from the atmosphere.

And they’re released in huge quantities from plastic baby bottles when they’re used to prepare formula according to standard guidelines, a new study in the journal Nature Food finds.

The study suggests that bottle-fed infants around the world may be consuming more than 1.5 million particles of microplastics per day on average. But the researchers caution that parents should not be alarmed by the findings.

That’s because we still don’t have enough evidence of health risks posed by microplastic consumptions by infants or adults. For example, last year, the World Health Organization released a report saying that there’s not enough evidence to conclude that microplastics in drinking water pose a risk to human health, though it said more research is needed to draw firmer conclusions.

“At the moment, there is no need to be afraid,” said Philipp Schwabl, a physician and researcher at the Medical University of Vienna who authored a study that found microplastics in human excrement. “But it is an open question and definitely an unmet [research] need.”

“The last thing we want to do is unduly alarm parents,” said John Boland, a professor of chemistry and materials science researcher at Trinity College Dublin in Ireland and one of the authors of the Nature Food study.

Boland says he and his co-authors decided to look at microplastics released by plastic baby bottles in part because there are a small number of products on the market. Worldwide, baby bottles made of polypropylene represent about 82 percent of the market, he says, and a small number of manufacturers dominate sales. “That made it easier to get a “comprehensive view of the market, and that also allowed us to actually look at the global potential of this issue,” he says.

The researchers selected 10 types of plastic baby bottles, representative of nearly 70 percent of the global market, and measured the levels of microplastics released when they were used to prepare infant formula according to guidelines set by the World Health Organization. Those guidelines call for mixing powdered formula with water heated to at least 158 degrees Fahrenheit to reduce bacteria loads.

What they found was that the release of microplastics was highly temperature sensitive, says Boland. “What’s happening is that there’s an interaction between the [plastic] polymer and the water,” Boland explains. “It’s almost like a flaking of the surface of the actual plastic itself.” Hotter water exacerbates that flaking, and so does shaking the bottle.

When the researchers filled the plastic baby bottles with room temperature water and shook them for about 60 seconds, to simulate normal formula preparations, “you get hundreds of thousands of microplastics,” he says. When they increased that temperature to 158 degrees Fahrenheit, the bottles released anywhere from 1 million to 16 million particles per liter. The bottles also released trillions of even smaller nanoplastics – tiny bits of plastic ranging in size from 10 nanometers up to 1 micron – so many that “we stopped counting them,” he says.

The plastic bottles continued to release microplastic particles over 21 days of testing.

The researchers then used global sales data for plastic baby bottles and information on national breastfeeding rates to estimate the potential exposure to microplastics for infants around the world in the first 12 months of life. Overall, they estimated that the average infant consumes over 1.5 million microplastics particles per day.

But those estimates varied drastically depending on the region of the world. Infants in higher-income parts of the world, including North America and Europe, where breastfeeding rates are lower, could potentially be consuming well over 2 million microplastic particles per day, they estimated. Meanwhile, in China, where glass baby bottles are more popular, the average infant’s consumption of microplastics is estimated to be in the “tens of thousands” of particles, Boland says.

Infants and Asia and Africa had the lowest potential exposure, they estimated.

While the health effects of microplastics are still unknown, parents can significantly reduce their infants’ exposure by adding some steps to their bottle preparation routine, Boland says. He recommends letting plastic bottles cool completely after sterilization in hot water, then rinsing them out at least three times with water that’s been allowed to cool to room temperature after being sterilized by boiling. (Make sure to boil it in glass or stainless steel, the researchers advise.)

If using powdered formula, prepare it with 158 degree Fahrenheit water in a glass container, then let it cool to room temperature before transferring it to a plastic baby bottle for feeding. And whether preparing formula or warming breast milk, never use the microwave to heat it up, Boland says, because that can create “pockets of really superheated water adjacent to the plastic, and that gives rise to copious quantities of microplastics.”

While the levels of microplastics detected by the new Nature Food study are quite high, they are in line with levels found by a 2019 study that found that plastic tea bags – the kind often found in pyramid-shaped bags – can release billions of plastic microparticles when steeped in hot water, notes Schwabl, who wrote a commentary in Nature Food on the findings from Boland and his colleagues. That further suggests that temperature is an important factor in influencing microplastics release, Schwabl says.

The researchers from Trinity College Dublin also found that plastic tea kettles, plastic instant noodle cups and plastic food storage containers all released similarly high levels of microplastics when subjected to heat. Schwabl says that points to a need for more research into microplastics released from plastic food storage containers, especially when they are subjected to higher temperatures.

As for what those microplastics may be doing in our bodies, the evidence so far is quite limited and unclear, says Schwabl. He notes some research has found microplastics can cause inflammation in rodents and accumulate in their guts and other organs, while other studies “show they do not harm.” “The threshold at which they cause problems has not been determined for humans,” Schwabl says.

“We’re probably excreting most of the microplastics that we ingest,” says David Love, an associate scientist at the Johns Hopkins Center for a Livable Future. One potential concern is around the ingestion of the much-smaller nanoplastics, he says. Once in the gut, these extra tiny plastic particles can “actually make their way into the bloodstream and from there transport throughout the body.” What’s needed, Love says, is more research on the potential health effects of chronic long-term exposure.

For now, Schwabl agrees we shouldn’t panic. He’s avoiding plastic containers in his daily life – “not so much that I am afraid of the ingestion, but I think thereby I may be contributing to [reducing] the amount of plastic waste” that makes its way into the environment.

Adds Love, “What this study and other studies are telling us is that we should be asking this of our regulatory agencies — and they should be exploring — what these risks are and developing guidance for industry in terms of what is the appropriate level of microplastic shedding from from high-risk products like baby bottles.”