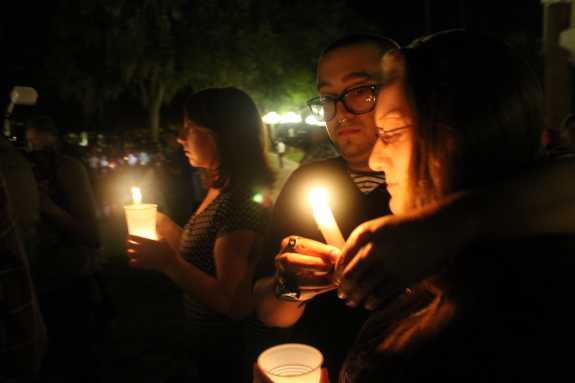 Students remembered Sotloff as a friend and fellow Knight. Photo by Amy Green.”

The former UCF student was killed by Islamic State militants, who released a video of Sotloff’s execution this week.

About 100 students gathered around UCF’s Reflection Pond to remember Sotloff with prayer and song.

Jaber Nyrabeah of the Orlando chapter of the Syrian American Council was one of the vigil organizers.

“He wanted to show the atrocities happening in Syria by ISIS and Assad, and basically he gave his life by doing so. So he’s part of our revolution like everyone else,” said Nyrabeah.

Jeremy Tache is a sophomore studying broadcast journalism. He’s also Jewish, like Sotloff, and he says the former UCF journalism student’s death has affected him.

“You heard about the Iraq war. When I was younger that was what I heard about. There was one thing going on. Yeah, there were other things, but there’s just so many different things going on whether it be in Ukraine or the Middle East or anything else. It’s kind of scary,” said Tache.

Sotloff was a journalist for TIME, The Christian Science Monitor and other publications. He was a South Florida native and attended the University of Central Florida from 2002 to 2004.