Strong Tropical Wave Likely To Develop In The Caribbean This Weekend 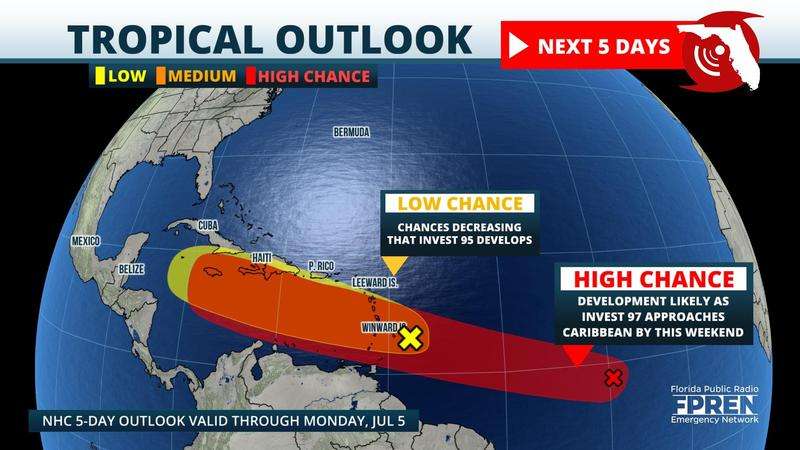 There is an increasing chance of a tropical storm in the Caribbean this upcoming holiday weekend — sooner than what is average in early July.

The tropical wave, what meteorologists are calling “97L” for tracking purposes, is located about midway between Africa and the Lesser Antilles on Wednesday. 97L is moving rapidly toward the west-northwest at about 20 mph. On this track and forward motion, it will approach the Lesser Antilles on Friday, and is likely to be situated over the northeastern Caribbean near or south of Puerto Rico and Hispaniola this weekend.

A sprawling ridge of high pressure covers the Atlantic from the South Carolina coast eastward to a position north of the developing tropical system. This will force the tropical system to move rapidly from east-southeast to west-northwest beneath the ridge at a rapid pace. Normally, weather patterns like this are predictable over long periods, so confidence is high that whatever develops in the tropical Atlantic will be in the Caribbean this weekend.

A strong trough of low pressure and cold front is forecast to move off the Southeastern coast of the United States this weekend. Most computer model simulations indicate that this trough will weaken the steering ridge. Initially, this would cause the tropical system to slow down in the central Caribbean later this weekend. The steering pattern is highly uncertain early next week and any direct interaction with the islands of Hispaniola or Cuba also complicate the forecast.

The National Hurricane Center says interests in the Leeward and Windward Islands should monitor the progress of 97L over the coming few days. Those with interests or plans in the Caribbean this holiday weekend should factor possible tropical development into their plans also.