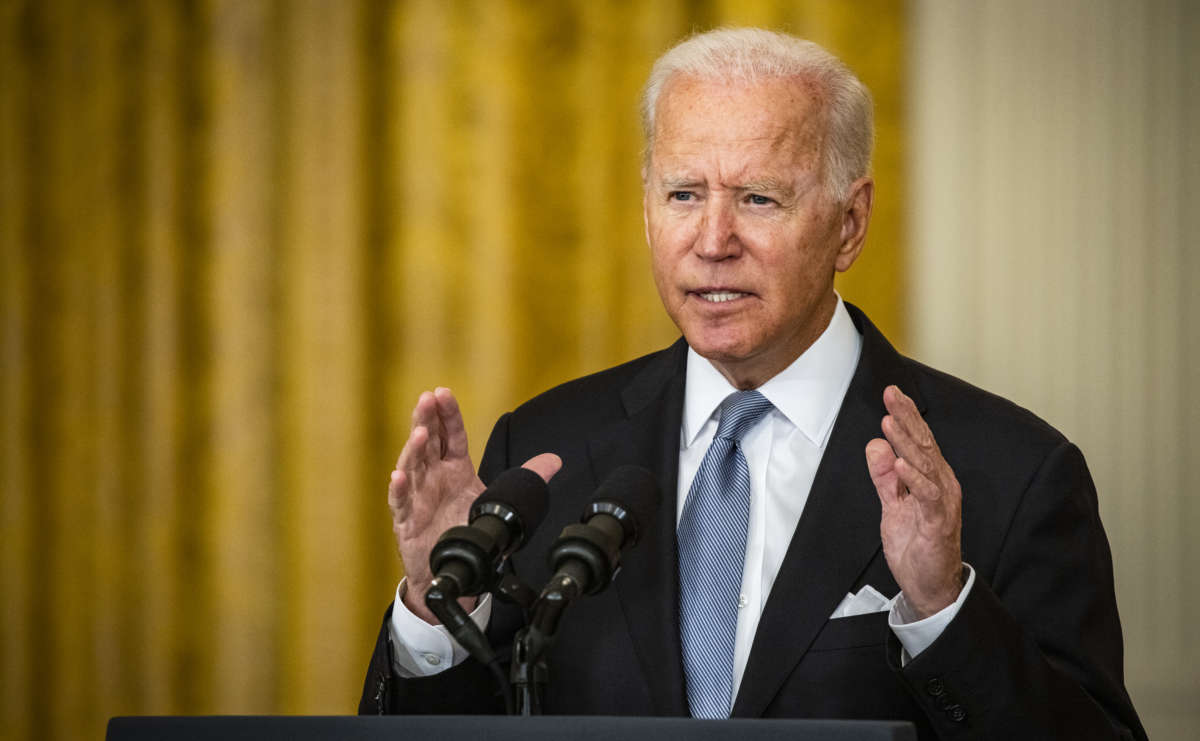 In Afghanistan the world is witnessing disastrous consequences associated with a rare area of agreement between President Biden and his predecessor, Donald Trump.

Both presidents saw the 20-year war in the remote and rugged country as an unwelcome inheritance and an albatross. For Trump it was the prime example of the “forever wars” he promised to end, a salient promise of his “America First” campaign. Frustrated in his initial efforts to truncate the U.S. mission, Trump finally bypassed the Afghan government to negotiate directly with the Taliban. The deal with them that he signed on Feb. 29, 2020 promised to pull all U.S. troops out by May 1, 2021.

Biden did not reverse this course when he took office, although he did push back the pull-out to September. He wanted more time to remove U.S. forces and, if necessary, evacuate U.S. civilians as well as Afghan interpreters and others who helped the U.S. war effort. He was advised he would have a period of weeks or months to do this after September.

It turned out, the Taliban had a schedule of their own.

It also turned out that the Afghan army the U.S. built, trained and equipped had been largely abandoned by its own government. Reportedly left without food and other supplies, much of the army simply ceded the battlefield to the Taliban, first in the hinterlands, then in the towns, then in the cities. There seemed to be little loyalty to the elected Afghan government, whose leader Ashraf Ghani fled the country before the Taliban entered the capital and took over his palace.

The Taliban did not fight their way into Kabul; they drove in. There were commuters in American cities who found it harder driving in to work the next day.

It seems no one foresaw all this happening this fast.

But someone has to deal with the general failure. Someone has to cope with the hundreds of Americans and international workers still in Afghanistan who want to go their home countries — and untold thousands of Afghans who want to leave theirs.

Biden stood up on Monday and said “the buck stops here.” But he made clear he thought that buck had been passed to him by plenty of other people. He acknowledged that the U.S. footprint was now confined to the Hamid Karzai International Airport. He seemed stunned by the scenes of chaos there, the tarmac awash with would-be refugees, some so desperate they clung to an aircraft as it took off.

Yet Biden remained adamant about getting out of Afghanistan, even given the catastrophe on view on screens the world over.

Four presidents over two decades have found themselves mired in Afghanistan, wondering when they might get out. Biden grasped the nettle like no other. And he may well face the political consequences each of his predecessors managed to sidestep.

President George W. Bush first sent troops to overthrow the Taliban then in power after they had harbored al-Qaida prior to the terror attacks of Sept. 11, 2001. Thereafter, his attention turned to invading Iraq and a larger struggle there. But he kept enough troops in Afghanistan to keep the lid on and move toward building an indigenous army and democracy (while denying it was “nation building”).

Elected in 2008, Barack Obama surged the U.S. fighting force to more than 90,000 in his first term, then drew it down aggressively after winning his second. Biden, his vice president, was opposed to the build-up and favored the drawdown.

Neither Bush nor Obama wanted “Who lost Afghanistan?” questions to haunt their own reelection prospects. And indeed, they did not.

Trump’s turn to the Taliban

Trump, by contrast, seemed more anxious about voters asking why the U.S. had not left Afghanistan.

In his 2020 book The Room Where It Happened, John Bolton, Trump’s national security adviser in 2018 and 2019, depicts Trump as determined to deal with the Taliban. He recalls Trump trying to bring Taliban leaders to Camp David for negotiations in September 2019, eventually dropping that plan, and then reviving its outline in what became the Feb. 29, 2020 agreement.

“This deal is entirely Trump’s,” Bolton wrote of that agreement. “Time will tell who is right, and the full effects of the deal may not become apparent until after Trump leaves office. But there should be no mistaking this reality: Trump will be responsible for the consequences, politically and militarily.”

Bolton, long known as a hardliner in previous Republican administrations, has since expressed his scorn for Biden’s policy and Trump’s, in the wake of events in Kabul.

H.R. McMaster, a retired Army general who preceded Bolton as national security adviser, has also linked the Trump and Biden approaches to Afghanistan. He told a Wilson Center interviewer on Aug. 12 that a “sound strategy” he helped devise for Afghanistan in 2017 had been “abandoned” in “capitulation negotiations conducted under Ambassador [Zalmay] Khalilzad” — Trump’s special envoy to Afghanistan who was retained in that role by the Biden administration.

So intense was Trump’s intention to withdraw that he persisted even after the 2020 election. According to a report published by Axios in May, Trump signed a memo in November that would have withdrawn all U.S. troops by mid-January (just five days before his term was to end). His top national security team, civilian and military, persuaded him not to issue the order but to leave the withdrawal date at May 1.

Trump has since said none of the current mayhem in Kabul would be happening if he were still president. Researchers will need to ascertain how many exit visas for Afghans had already been arranged before Trump left office, or what sort of procedures he might have had in place for Americans and Afghans wishing to leave. But lacking such evidence, and given Trump’s timetable and concessions made to the Taliban, it is easier to imagine the current situation happening that much sooner.

Trump in fact had complained at his June 26 rally in Ohio that the Biden administration was dragging its feet and ought to get out faster.

Fumbling at the goal line?

There is a case to be made that Biden is less responsible for this fiasco than any of the previous three presidents. But he is the one who fumbled at the goal line, as it were, at the crucial moment of the game from the perspective of media and politics.

While an Economist/YouGov poll this June found only 1 American in 5 opposed to the U.S. withdrawing from Afghanistan, a Morning Consult survey that followed the fall of Kabul found a plurality of 45% opposed to withdrawal if it meant a Taliban takeover.

It can also be said that by the time Biden was carrying the ball, it was more like being left holding the bag.

“I am now the fourth American president to preside over an American troop presence in Afghanistan — two Republicans, two Democrats. I will not pass this responsibility on to a fifth,” he said. “It is time for American troops to come home.”

Biden made that statement on April 14, with Trump’s May 1 deadline looming. He repeated the vow about passing the responsibility in his speech on Monday.

There was in that “time to come home” phrase a faint, distant echo of “come home, America” — the campaign theme of presidential nominee George McGovern, who ran against the Vietnam War in 1972 and lost 49 states.

It was not a good year for Democrats on the ballot, but one who won was a 29-year-old Senate candidate in Delaware who did not make a major issue of the war. The young Joe Biden had not been a campus activist in his years at the University of Delaware or at Syracuse Law School. “I didn’t march,” he would recall later. “I ran for office.”

Just two years later, still in his first Senate term, Biden watched with the nation as the long war in Vietnam ended in debacle. Helicopters plucked the last U.S. military and civilians from a rooftop in Saigon as the city fell, ending a civil war in which the U.S. had backed the South Vietnamese government against the communist regime of North Vietnam and its guerilla allies, the Viet Cong.

American support for Saigon had been waning for years, with the U.S. ending the draft after 1972 and leaving the fighting to the Vietnamese. When left on its own, the South Vietnamese army was routed in a matter of months. Many thousands of Vietnamese who had helped the U.S. were left behind, with some escaping in desperately overloaded ships. Many of these “boat people” were picked up by U.S. Navy vessels; others made it to port in surrounding countries. Eventually, many came to the U.S. where they and their descendants now number well over a million.

When Saigon fell, none of the U.S. presidents who had made commitments to Vietnam was on hand to bear the consequences. Dwight Eisenhower, who sided with the French colonialists against the Vietnamese in the 1950s, was long dead. So was John F. Kennedy, who inherited the war but felt he had to extend it and expand the U.S. commitment, and Lyndon B. Johnson, who had escalated the war far beyond his predecessors. Richard Nixon, still alive, had resigned on the brink of impeachment over the Watergate scandal.

President Gerald Ford, who had been in office only months when Saigon fell, had been preoccupied with domestic matters and been assured the Saigon government could hold on a while longer. He was misinformed. But relatively few blamed him, even in the wake of a disastrous end to the long struggle and a humiliating exit for the U.S. His approval in the Gallup Poll fell briefly to below 40%, but it recovered to more than 50% within two months.

The other factor presumed by many to have influenced Biden on Afghanistan is more personal. Some who heard Biden speak on Monday were surprised he did not mention his son, Beau Biden, who was deployed to the Iraq War in 2008.

“I don’t want him going,” his father said at the time, “But I tell you what, I don’t want my grandson or my granddaughters going back in 15 years, and so how we leave makes a big difference.”

Beau Biden died of brain cancer in 2015, and his father has speculated at times about the effects of toxic chemicals his son encountered while in the war theater.

As vice president, Biden was reported to have told a colleague that he did not want his son going to Afghanistan if the mission was to make sure it was safe for girls to go to school. (The Taliban is notorious for denying women the most basic rights.)

The president has often made mention of the impact his son’s life and death have had on him. And while such things as personal loss — or the Vietnam era experience — cannot be measured precisely, neither can they be counted out.