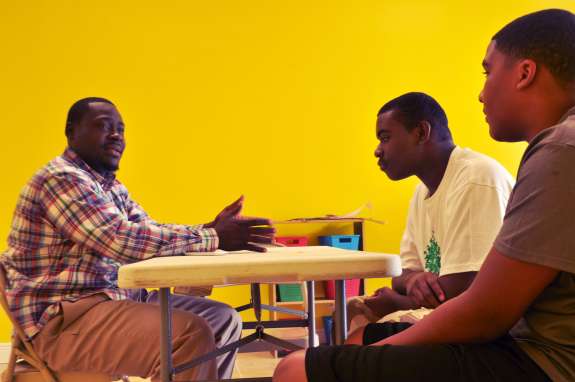 Charles Williams is sitting at a table in Miami-Dade County, with two of the young men he mentors. They get together at least twice a week.

On this day, they’re talking about sex. More specifically, it’s about protection.

“In the heat of the moment sometimes, a guy doesn’t necessarily reach for a condom,” Williams tells Dwayne Jackson, 14, and Traivon Harris, 15.

The boys get bashful and chuckle at William’s blunt delivery.

But Williams said he has to talk this way about safe sex with his young men. Many young, heterosexual black men don’t consider themselves at risk for HIV/AIDS.

“The thing is people feel invincible and I think it’s extremely naive and ignorant for people to think they’re invincible,” he said.

Forty-one percent of new infections in Florida are in the black community, according to the Florida Department of Health’s data on new HIV diagnoses in 2013. And many of those getting infected are straight black men, a group observers and HIV specialists say are not being included in HIV prevention efforts.

Williams is co-director of Generational Cure, a Miami nonprofit that mentors for young black teens. He When he talks about sex with the teens, there are no PowerPoint presentations, no pamphlets.

Williams said it’s “real talk” with teens who have their own ideas about safe sex. Jackson, the 14-year old, is a virgin.

“I think it’s okay to have unprotected sex with a girl you have been with for a long time because that girl you might know,” Jackson said.

Williams corrects him. “It’s not okay at all to have unprotected sex.”

This story is one part of a series on HIV in Florida. Check here for the full series.

Harris, the 15-year-old, provides his take. He recently lost his virginity.

“I thought about it before I did it. I made sure I had protection. I made sure the condom was lubricated,” Harris said. “I made sure it wasn’t expired.”

Dr. Cheryl Holder, an internist and HIV specialist, said it’s important that community groups and other institutions in the black community talk openly and honestly about black straight men who are HIV-positive.

“I just saw an ad, it was an ad with two (black) males and you would probably think they’re two young gay males,” she said. “I’ve seen (HIV-prevention) ads on bus benches of women, but you don’t see a message, ‘Where did these women get HIV?’”

Holder said the limited messaging puts the onus on black women to protect themselves. And it doesn’t force black men to consider their part, she said.

“Definitely if the man would put the condom on and not force the woman to have to negotiate that relationship, we would see a whole lot less transmission to the women,” she said.

Holder said she feels the lack of outreach is at least partly responsible for some of the problems she sees. Many of her straight black male patients look for excuses not to take an HIV test. Or they think they can tell their partner’s status based on how she looks. Or they think HIV and AIDS is a gay disease, she said.

Holder tries to debunk these misconceptions. But by the time many of her straight male clients do come in for treatment of HIV, she said she finds their T-cell counts are very low and the men already are showing signs of serious infection.

The consequences are significant, according to the U.S. Centers for Disease Control and Prevention. Every year, between 1988 and 2010, HIV was the leading cause of death in Florida for black people between the ages of 25 and 44.

The numbers have started to drop: HIV was the fifth leading cause of death for that population in Florida in 2013.

“A lot of the heterosexual transmission occurred among people who had multiple partners and substance abuse,” Holder said. “It’s (sexual) activity.”

HIV’s Not a Gay Disease

Jeffrey Edwards, a Miami Gardens resident, contracted HIV in 1988. He said he was infected by having unprotected sex with a woman.

“A lot of people thought it was just that, that people with AIDS was gay,” he said. “It ain’t like that.”

Jeffrey Edwards contracted HIV in 1988 after having unprotected sex with a woman. He said he shares his story as a cautionary tale to young black men.

Back then; Edwards said he didn’t know much about the virus. Now, he uses his personal story as a cautionary tale when talking to the young men in his neighborhood.

He said he’s surprised young men want to have unprotected sex, despite all the information that’s out there today. On the other hand, he said, they haven’t seen AIDs kill people the way it used to.

“I hear young guys say…they’re not going to use no rubber,” Edwards said. “I say, ‘You making a big mistake.’”

“We want them to know that these things can actually happen,” he said.

HIV/AIDs doesn’t get as much attention as it used to, Williams said, but it is serious.

“We don’t see on the news where someone dies of HIV/AIDS,” Williams said.

Jackson, the 14-year old Williams mentors, said he is listening.

“The reason why I thought unprotected sex was cool is that if you’re with a girl for a long time it’s OK,” he said. “I learned it’s not OK — as Mr. Charles said.”

Williams’ hopes that message stays with Jackson and the other young men he mentors. He’s counting on that real talk to convey the real consequences of HIV.