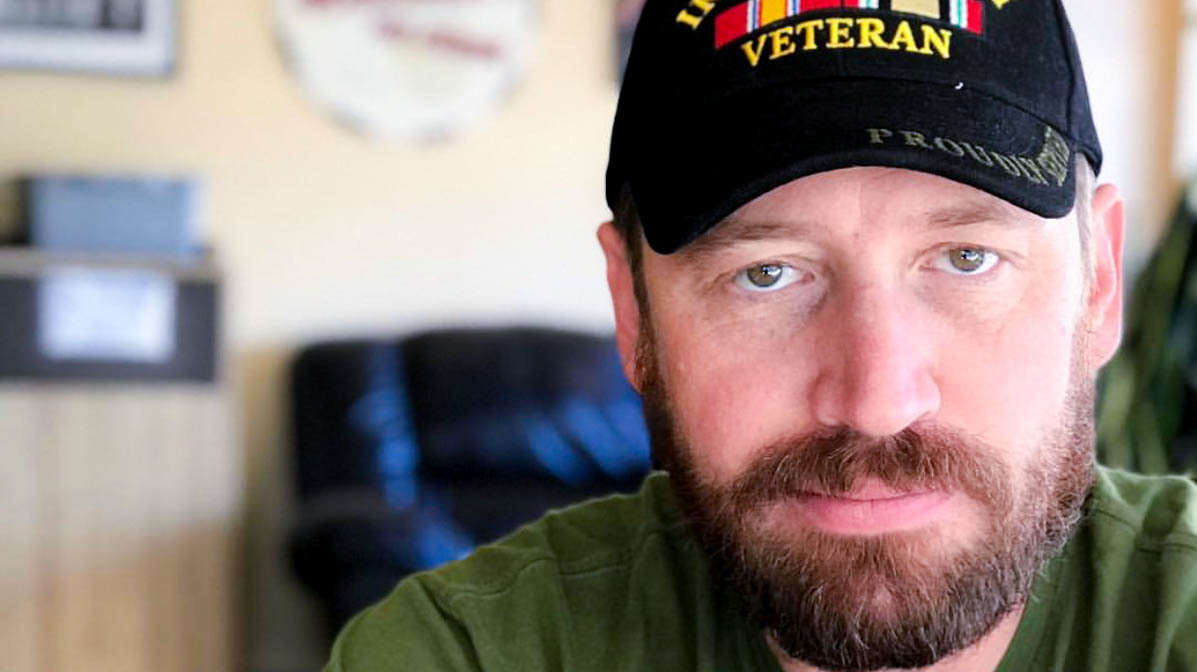 "I think in a lot of ways, we survived that deployment in Iraq by sharing humor with each other," said former Army Spc. Garett Reppenhagen, seen at home in Colorado Springs, Colo.

StoryCorps’ Military Voices Initiative records stories from members of the U.S. military and their families.

Former Army Spc. Garett Reppenhagen has always loved Halloween. Even during his year-long deployment to Iraq in 2004, he still found a way to celebrate.

For a remote StoryCorps conversation earlier this month, Reppenhagen told his friend, Thom Cassidy, who served with Reppenhagen at the time, about a costume choice that almost landed him in hot water: dressing up as his “surly” team leader, Sgt. Richardson.

“He was a character. You know, he’s got a shaved head, ears sticking out of the side, mustache,” he said. “I thought it’d be really funny if I dressed up like Sgt. Rich.”

The scheme required a good measure of stealth. Reppenhagen convinced Sgt. Richardson’s roommate to let him borrow a shirt that had Richardson’s rank and nameplate on it. He also traveled two bases over to get a coffee mug that looked like the one the sergeant used.

The morning of Halloween, Reppenhagen took his new look down to the cafeteria for breakfast. “Folks kind of see me, they’re chuckling, and I dig into my omelet,” he said. “And the doors of the chow hall slam open.”

In walked the highest ranking enlisted soldier on the base, Reppenhagen said: the command sergeant major. The entire hall went silent.

For a brief moment, the command sergeant major even appeared to fall for his imitation, before sending Reppenhagen to his bunk as punishment.

“He’s got this general aura of anger, but he’s not extra angry until he gets about like 5 feet from me,” Reppenhagen said.

“In the United States Army, it is against the law to impersonate a non-commissioned officer,” he added. “So, I was scared.”

“He says, ‘Reppenhagen, that’s the most fine Halloween costume I’ve ever seen in my life,’ ” he recalled.

To Reppenhagen’s surprise, the command sergeant major snapped some pictures of the costume, and left.

Sgt. Richardson, on the other hand, “never really forgave me,” Reppenhagen said. But he was ultimately a good sport about the prank.

“I think in a lot of ways, we survived that deployment in Iraq by sharing humor with each other,” Reppenhagen said. “I hope that [Sgt. Richardson] thinks about that and laughs sometimes.

“We were doing an awful job in an awful time. If I shed any joy to anybody on that base that day, then I think it was all worth it.”

Reppenhagen, who served just over four years in the military, is now the executive director of Veterans for Peace, where he shares his experiences with other vets and allies around the world and encourages the community to help build a “culture of peace.”

Audio produced for Morning Edition by Sylvie Lubow. NPR’s Emma Bowman adapted it for the Web.