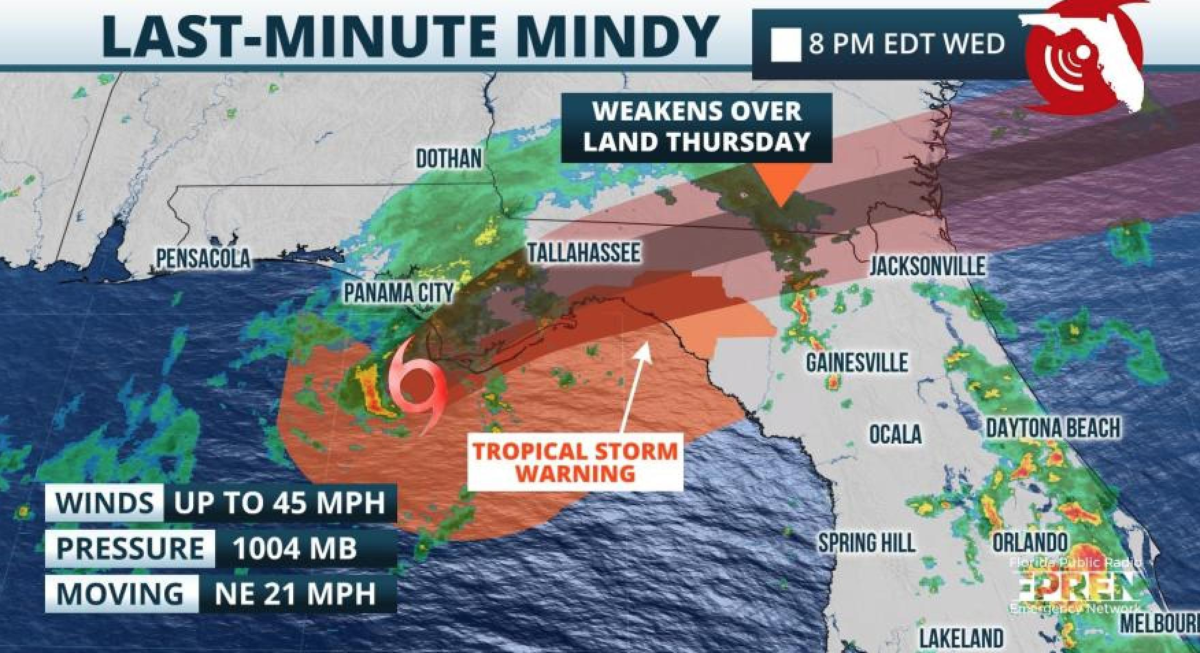 The storm came ashore on Wednesday night, just east of where Tropical Storm Fred made landfall last month. It will gradually weaken as it crosses Georgia and enters the Atlantic later in the day.

Quickly forming Tropical Storm Mindy has been downgraded to a depression after making landfall on Wednesday night and dumping heavy rain on the Florida Panhandle.

The 13th named storm of the Atlantic hurricane season started out as a disturbance on Wednesday and became better organized throughout the day, being classified as a tropical storm by Wednesday afternoon and prompting tropical storm warnings from Mexico Beach to the Steinhatchee River.

As of 5 a.m., Mindy had been downgraded to a tropical depression with maximum sustained winds of 35 mph with higher gusts. It was located about 80 miles south-southeast of Valdosta, Ga., and moving to the northeast at 20 mph.

Forecasters say Mindy will continue moving through southeastern Georgia on Friday morning, and over the western Atlantic by late morning or early afternoon. It will gradually weaken on Friday and become a remnant low off the South Carolina coast by Saturday.

“Swimmers from the Panhandle eastward and southward into Pinellas, Manatee, and and Charlotte counties will want to be aware of high rip current risks in the wake of Mindy,” Hawthorne said. “Atlantic coast beach-goers will continue to feel rip currents and swell from Hurricane Larry well offshore (Friday) and (Saturday) before conditions improve this weekend.”

Mindy was forecast to produce as much as 6 inches of rain across the Panhandle and parts of southern Georgia and South Carolina through Friday morning.

Forecasters are following two more areas in the tropics: a disturbance near Nicaragua, which could develop near the coast of Mexico this weekend; and a tropical wave near the coast of Africa. Neither are immediate threats to the state.

Information from the Florida Public Radio Emergency Network and Associated Press was used in this report.