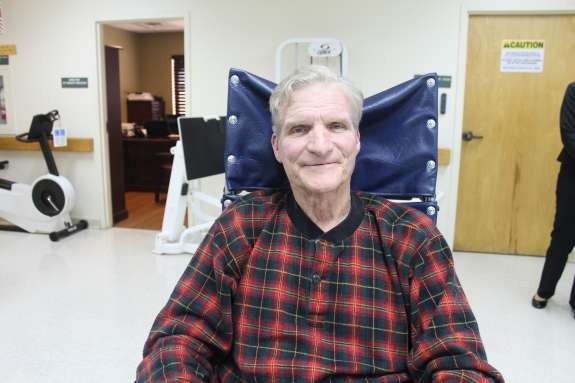 Richard Montgomery has been getting rehabilitation in an Orlando nursing home. Florida on Friday approved 2,600 new nursing home beds.

Nursing home beds are in short supply in Florida.

But the Agency for Health Care Administration on Friday will announce a list of companies to build 3,100 more, ending a 14-year moratorium.

Lillian Lara’s 87-year-old father fell in December. After a hospital stay, he moved to the Commons at Orlando Lutheran Towers for rehabilitation.

Lara says her father knows he can’t go back home, and he likes where he’s at.

“If he don’t feel comfortable or at ease, he start feeling distant and sad and I don’t want him to get depressed,” Lara said.

The company that owns The Commons has nearly 500 beds in a high-rise complex. But the 135 nursing home beds are the most in demand: They run 95 percent full, on average.

So Lara’s father will have to move somewhere else.

“That’s where we at: Waiting and seeing,” Lara said. “Plus praying to god to give us a miracle.”

But companies are asking to build more than 4,300 beds in Central Florida.

It’s the same story across the state.

For every bed they approve, Florida will deny 5 more.

Kerry Gerrity, associate executive director, shows off a 600-square-foot assisted living apartment that may be converted into a new nursing home room if the state approves it.

“This is a typical apartment,” Gerrity said. “It’s got a kitchen so we have plenty of plumbing, electrical, a bathroom that’s ADA compliant.”

The Orlando Senior Health Network has an application in to the state of Florida to expand its nursing home by 40 beds, a $2.6 million project.

The empty apartment was designed as an assisted living facility apartment. When it was built, Florida lawmakers had stopped all new construction of nursing home beds because of the expense in the Medicaid budget.

“I wouldn’t have thought they would open any beds because the moratorium’s been so long,” said Alicia Labrecque, CEO of the Orlando Senior Health Network.

That moratorium lifted last year, but there’s no guarantee that Orlando Senior Health’s plans will be approved.

The nursing home boom is expected to bring $350 to $500 million construction over the next two years in Florida. It’ll provide a steady stream of work for construction workers, and could create more than 5,200 permanent jobs.

A private nursing home bed in Florida costs more than $91,000 per year. That means the expansions could be worth $285 million in revenue every year – hence the stiff competition.

But nursing homes in general have a small profit margin of 2.3 percent, said Tony Marshall, an administrator with the Florida Health Care Association, an industry organization for nursing homes.

Marshall says most nursing home patients have Medicaid, which loses money for the nursing home. But they’re able to make a profit on short-term Medicare patients who just need rehab.

“Hospitals are now providing much more acute services, and the nursing homes of today are following suit,” Marshall said. “They’re sort of the stepdown unit from that acute care hospital for rehab and continuing medical care.”

Take Richard Montgomery, who’s sitting in a wheel chair doing bicep curls. He’s a Disney engineer, and if you’ve stayed at a Disney hotel like the Grand Floridian, you’ve seen some of his work.

For Lutheran Towers, Montgomery is one of those short-term patients: the inner lining of his aortic valve ruptured in December.

“It literally felt as if someone was stuffing a bowling through my heart,” Montgomery said. “And I’m riding a motorcycle at the time. Terrific pain. And I thought ‘man, what is that?’”

Montgomery had complications after his open heart surgery, losing all his toes and half of his left foot. Now he’s learning how to get around again.

“I’m looking for soon to have one of these little scooters where I can propel myself around and have the nurses chase me,” Montgomery said.

Richard is a sign of things to come: A flood of baby boomers who are reaching retirement age.

Marshall with the nursing home association says Florida needs as many as 20,000 new beds in the next 20 years.

Right now, some seniors in Florida are stuck waiting for a nursing home bed, or taking family members to a home that isn’t their first choice.

Lilian Lara says her mother is buried in a cemetery in Orlando. Her father bought the plot next to it.

“And he got his space there waiting for him,” Lara said. “And he said it can wait, I ain’t going nowhere.”

Where he waits in the meantime isn’t so clear.