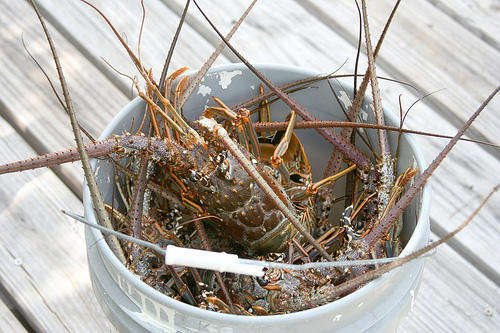 Spiny lobster is a South Florida favorite - and the state's most valuable seafood. RICHARD ELZEY/FLICKR

State wildlife investigators announced Tuesday that they’ve wrapped up a two-year investigation targeting what they say is a criminal conspiracy in the spiny lobster fishing industry.

Lobster is Florida’s most valuable commercial fishery, with landings usually worth more than $40 million a year.

Investigators went undercover and conducted surveillance in what they called “Operation Thimblerig.” Thimblerig is another term for shell game.

Investigators say the primary suspect is Elena Reyes, 67, owner and operator of Florida Marine Fisheries Consultant, a business with an address in Palmetto Bay.

She’s accused of cheating the state out of about $200,000 by underreporting the sale price of trap tag transfers. Every commercial lobster trap in Florida is required to have a tag from the state and the number of those tags is limited, making them valuable.

When the tags are sold, the state gets a surcharge, so by underreporting the sale price, Reyes created a “considerable deficit” in the amount the state was owed, according to the FWC.

Reyes helping people cheat to get commercial fishing licenses was “unfairly competing with legitimate stakeholders, all while enriching herself and other bad actors in the industry,” according to the FWC.

She faces charges of racketeering, conspiracy to commit racketeering, organized scheme to defraid, 30 counts of criminal use of personal ID and 27 counts of official misconduct, all felonies.

Oscar Martin Mazorra, 54, of Weston, faces one first-degree felony count of conspiracy to commit racketeering. Another person whose name was not released under an exemption to public records law was also charged in the case.

Reyes and Mazorra were both arrested in Monroe County, home to most of Florida’s spiny lobster fishery.

The case is being prosecuted by the state Attorney General’s Office.