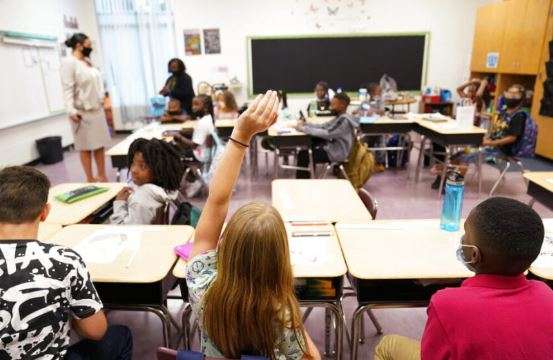 In this file photo, a student raises their hand in a classroom at Tussahaw Elementary school on Wednesday, Aug. 4, 2021, in McDonough, Ga. (Brynn Anderson/AP)

The measure that opponents dubbed the “Don’t Say Gay” law goes into effect July 1. But one of the most controversial parts of the Parental Rights in Education law won’t go into effect right away, according to a state memo shared with WLRN.

“This provision [on classroom instruction] takes effect on July 1, 2022, only for kindergarten through grade three. For other grades, it takes effect only after the Florida Department of Education (Department) develops rules or guidance on age-appropriate and developmentally appropriate instruction,” the guidance reads in part.

School officials say they’ve been urging the department to release guidance on how they’re supposed to implement the law, which has sparked an outcry from students, educators and activists across the country.

Some local officials feared that districts would have to go a full school year without receiving formal guidance from DOE because of a provision written into the law that says the department has until June 30, 2023, to review and update educator practices and student services guidelines.

Some districts have already started making changes in an attempt to get in compliance ahead of the July 1 effective date.

According to school board members, the School District of Palm Beach County has removed three books from classrooms and library shelves that staff worry could violate the law: Call Me Max, I Am Jazz and Gender Queer: A Memoir. Students are not to have access to the books until they’re reviewed further.

The district is also directing teachers to review all books in their classroom libraries for titles that could run afoul of House Bill 1557 and other new state laws.

A spokesperson for SDPBC did not respond to questions about the DOE memo and how it could affect the district’s guidance for educators.

Opponents have railed against the law, which they say will threaten support for LGBTQ students, who already face higher risks of suicide and bullying than their straight peers, according to the Human Rights Campaign.

Some queer educators have told WLRN that the measure is pushing them to consider leaving the classroom.

Supporters of the legislation say parents should be the ones to decide when and how to bring up LGBTQ topics with their kids.

Meanwhile, LGBTQ advocacy groups have filed suit over the law, arguing it violates students’ and families’ constitutional rights of free speech, due process and equal protection.