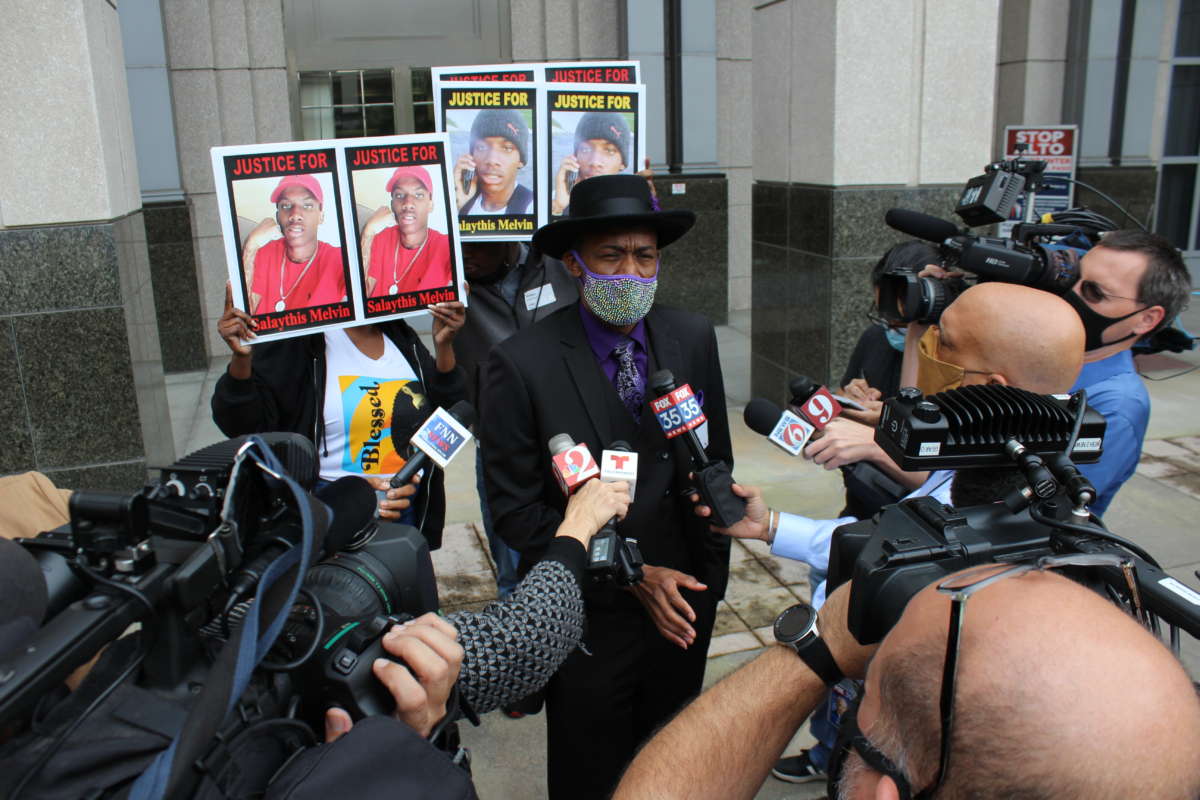 Carlus Haynes, an attorney who represents the family of Salaythis Melvin, talks to the media outside the Orange and Osceola County state attorney's office in downtown Orlando. Photo: Matthew Peddie, WMFE

The State Attorney for Orange and Osceola County has decided not to prosecute an Orange County Sheriff’s deputy who shot and killed a man outside the Florida Mall in 2020.

Salaythis Melvin, who was 22, was shot in the back as he ran from sheriff’s deputies outside Dick’s Sporting Goods on August 7th, 2020. Deputies were serving an arrest warrant on someone who was with Melvin that day.

State Attorney Monique Worrell said Melvin was carrying a gun, and experts who reviewed footage of the shooting said it was reasonable that Corporal James Montiel feared Melvin posed an imminent danger to him and his fellow officers.

Worrell said it can’t be proven beyond a reasonable doubt that Montiel committed a crime.

“My deepest sympathies go out to Salaythis Melvin’s family,” she said.

“I know this is not the result they have been looking for, and that they feel they have been denied justice. I also want to be clear that this is a legal decision and not a moral one.”

Worrell says despite the decision not to prosecute, she’s committed to justice and accountability, and has established a unit to review cases where people are shot by officers.

“Meaningful accountability means prioritizing the investigation of these cases, filing charges where an officer has committed a crime and pushing for meaningful change with our law enforcement partners and our local government,” she said.

She said a fair and unbiased review of cases does not mean they must end in prosecution.

“I know that these steps bring no comfort to Mr. Melvin’s family and loved ones whose loss is unbearable and still raw. At this time, these are the only legal actions that I can take. I stand before you with a heavy heart more committed than ever to bring in positive and meaningful change to our community.”

Attorney Carlus Haynes, who represents Melvin’s family says he is disappointed with the way they were told about the decision on Friday afternoon, before the press conference.

“She had one of her deputies call, and they delivered that information over the phone, and I don’t think that was the proper way to do it,” said Haynes.

“She could have brought the family down here earlier today, talked to them, explained her situation. And next, I just don’t think it’s sound in the law. I really think that the direction that they took was the wrong direction.”

He said the decision not to prosecute came as a surprise to the family.

“State Attorney [Worrell] said the reason why she did not go forward was because she could not prove the case beyond a reasonable doubt. That’s not your job. The jury determines that. Your job is just to present evidence.”

Outside the state attorney’s office with Haynes were Aston Mack and Lawanna Gelzer, holding signs with photos of Salaythis Melvin and the words ‘Justice for Salaythis Melvin’ and ‘Recall State Attorney Monique Worrell.’

Mack said there was a lack of transparency about the process.

“Why isn’t the family here? Why isn’t the attorney in that meeting? Why isn’t anybody actually representing Salaythis Melvin a voice in this courthouse today?” said Mack.