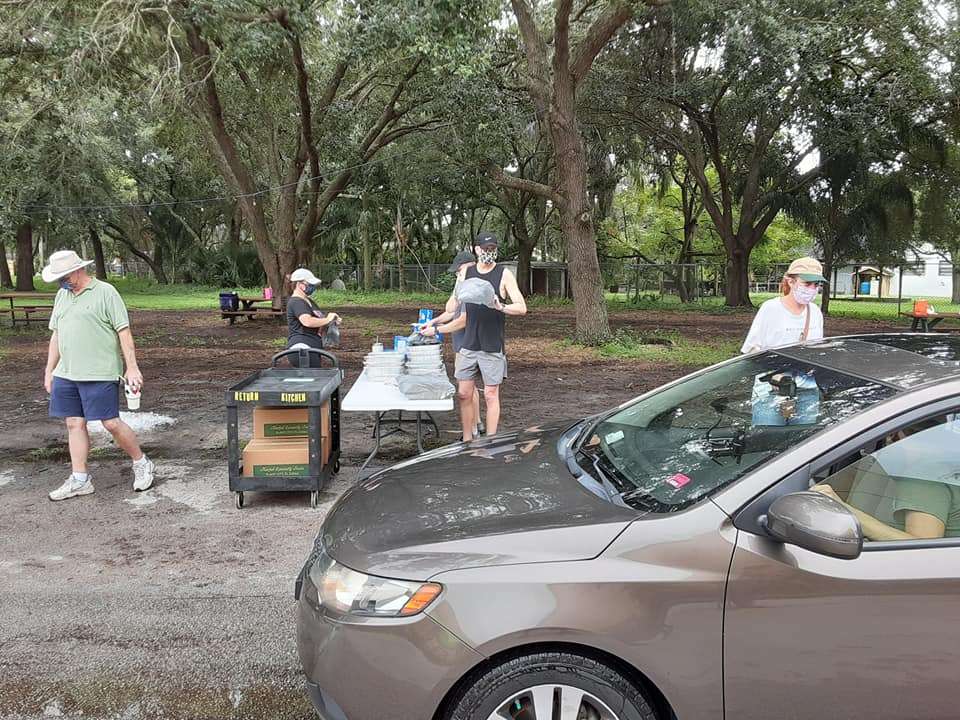 When the theme parks closed last year, it affected the livelihoods of tens of thousands of theatre artists, according to St. Luke’s United Methodist Church’s website.

Many full-time performers, costumers, designers, character performers, technicians and managers were furloughed or laid off completely. The Actor’s Equity Association says 720 of their 780 members employed at Disney were laid off in late October. That’s around 92%.

Every Tuesday between 11 a.m. and 1 p.m., members of the performing arts community can go to the church and pick up produce, prepped meals and bread, depending on availability. The event also includes a variety of live entertainment, from musicians to stilt walkers to actors.

MacKinnon says the church wanted to provide an experience of hope, joy and connection.

“We really wanted to make this not just a food distribution, because we knew the pain that everyone was living in,” he says. “So from the very beginning, we committed to providing live entertainment and reaching out to folks who didn’t have, you know, an avenue to perform at all.”

Miller says she lost her job at Disney after working there for 17 years. After receiving food the first week, she says she wanted to find a way to give back.

“It was really on my mind, ‘what can I do during this pandemic; during this crisis?’” She says, “I was always taught the best gift you can give is of yourself and your time.”

Miller says she started by driving through each week with a different message on her car to thank the volunteers. She says she then reached out to MacKinnon to ask if there was anything more she could do, and he said “just show up.”

Miller now goes to the event every week to greet the cars and check in with everyone.

MacKinnon says a group of Orlando improv actors have created their own break room outside.

“They started staying in the parking lot under the shade and taking out their lawn chairs and created their own green room in the driveway and getting to connect with…their family, basically that they, you know, worked with every day and they hadn’t seen them for months, and they got to reconnect and kind of experienced that family once a week,” he says.

MacKinnon says the church plans to keep the event going as long as they can.

“We’re committed to holding on to it, hopefully for not another year,” he says. “Hopefully, folks, you know, get called back to work.”

Miller says she has hope that theme park performers will return to the parks.

“The theme parks are just more interesting with performers in them,” she says. “There are people that can’t go on fast rides, and they need to have something there for…senior citizens and children with special needs.”