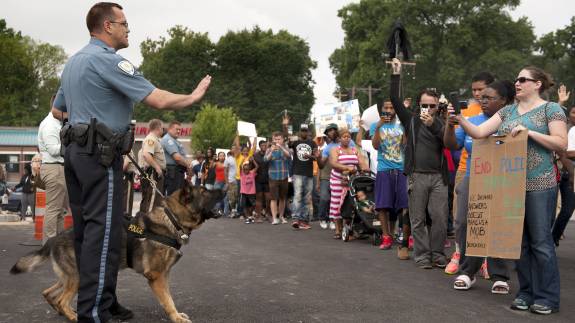 A march and prayer vigil that began as a way to honor Michael Brown, an unarmed black teenager who was killed by police Saturday, ended with looting and violence in suburban St. Louis Sunday night. At least one store was set on fire.

The killing, and the protest against it, happened in Ferguson, Mo., where Brown, 18, was shot and killed during an altercation with a Ferguson police officer in a street lined with houses Saturday. Police and witnesses agree the teen did not have a gun and that a third person was also involved; beyond that, the details of Brown’s death are in dispute.

The case is being investigated by an outside agency, the St. Louis County Police Department.

“The crowd that gathered near the site of the shooting, in the Canfield Gardens apartment complex, was large but peaceful. Community leaders called for a boycott of Ferguson businesses, and collected money to pay for Michael Brown’s funeral.”

That violence broke out after a series of peaceful and passionate rallies for Brown, Lippmann says. After a QuikTrip convenience store near the site of the shooting was overrun and set on fire, the looting quickly spreading to an area five miles wide.

“Several other stores along a main road near the shooting scene were broken into, including a check-cashing store, a boutique and a small grocery store. People also took items from a sporting goods store and a cellphone retailer, and carted rims away from a tire store.

“TV footage showed streams of people walking out of a liquor store carrying bottles of alcohol, and in some cases protesters were standing atop police cars or taunting officers who stood stoic, often in riot gear.”

Calling the violence and looting “very upsetting,” a member of Michael Brown’s family issued a statement urging peace and justice. The message also said the family would not endorse any further rallies or protest marches.

The teenager’s death is attracting national interest — including that of the FBI, as the St. Louis Post Dispatch reports:

“Benjamin L. Crump, a civil rights lawyer known for representing the family of Florida shooting victim Trayvon Martin, announced Sunday night that he had been hired to represent Brown’s family. Crump is based in Tallahassee, Fla.

“In Washington, a spokesperson said Attorney General Eric Holder asked civil rights lawyers in the Justice Department to monitor the case. In St. Louis, Special Agent Cheryl Mimura said, ‘I can confirm that the FBI is working closely with the St Louis County PD to review the matter at this time.'”