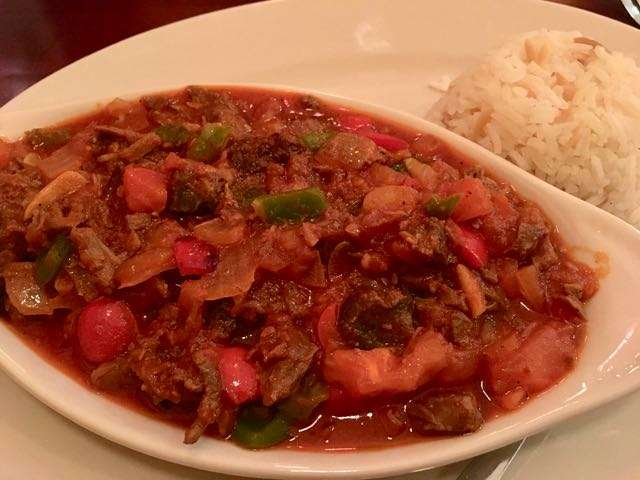 I love seeing culturally diverse restaurants pop up in varied areas of town. So I was pleased to see Zeytin Turkish Cuisine open on Edgewater Drive just east of Lake Fairview and within sight of the Orange County VFW.

Zeytin is a small buisiness in a free-standing building, the former site of Woody’s Italian American Grill and, before that, Woody’s Wings & Whatnot. Woody’s gone.

Zeytin has a menu that belies its size, with myriad hot and cold appetizers, assorted Turkish pides (or flatbreads), kebabs and sautés. It looks like an ambitious set of offerings but most are variations on the same theme.

I started with the Ezogelin, a red lentil soup flavored with spices such as paprika, black pepper and perhaps a bit of mint. The soup, whose name translates to the bride Ezo, was finely pureed. And a tinge of tomato made it one fine spoonful after another.

For my entree I selected the Lamb sauté. It had small cubes of lamb with diced green bell peppers, onions, mushrooms and tomatoes with garlic and other seasonings. It was served with a small timbale of rice (it could have been a huge timbale and I’d still call it small — I like lots of rice). The meat had the appropriate amount of chew that you would expect from lamb, and the seasonings were all perfectly balanced. The dish had a wonderful house-made feel.

I don’t think it warranted its $19.95 fee, however. There just didn’t seem to be that much to it.

And its not like the surroundings justify higher prices, although I did like the brocaded banquette cushions and matching bolsters. One diner nearby apparently thought the bolsters were to be used as pillows and had stretched out on the banquette. I’m pretty sure that’s not what you’re supposed to do, but I’ll admit I don’t know all of the Turkish dining customs.

Service was pleasant but there were long waits that didn’t seem necessary. I guess I could have just stretched out and taken a nap.