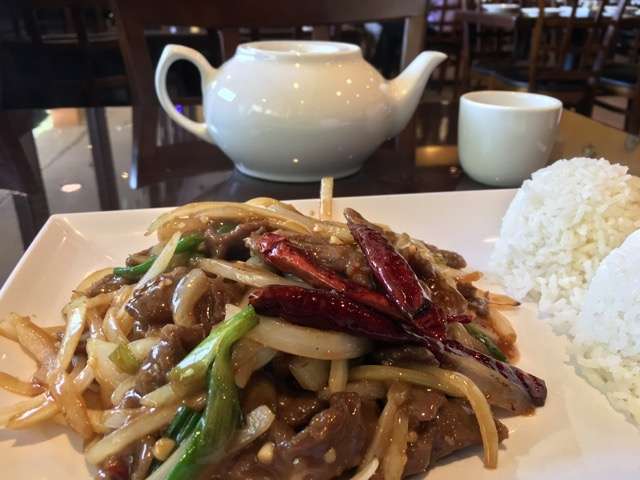 I miss Eastern Pearl. The Chinese restaurant in Altamonte Springs, in my estimation, did some of the best Asian dishes in the area.

Now in the place of the original Eastern Pearl is another Chinese restaurant, Yummy House, a small chain out of Tampa with six locations, all within Florida, which, according to its website, has won awards for its cuisine. I don’t see any accolades coming to the Altamonte Springs restaurant any time soon.

Perhaps my visit was destined to be troublesome when I was greeted — a word that doesn’t quite describe the unsmiling acknowledgement from the person who came from around the bar when I came in.

I was given only a lunch menu, which did not have any starter or appetizer options, which I would have ordered.

I got the Mongolian Beef, which prominently featured sauteed onions along with the limp slices of beef. The “spicy” sauce wasn’t so much, though I’m sure that if I had popped one of the many chili peppers that sat atop the pile into my mouth I’d have surely felt some fire.

The jasmine rice that accompanied was loose and didn’t lend itself to easy chopsticking.

It was nice that the lunch included a pot of tea (or soda, if you prefer), and at $6.99 would have been a good bargain if the food had been better.

The interior of the restaurant has changed a tad bit, but it’s possible that some of those changes occurred under Eastern Pearl’s tenancy. (I seem to remember a floor to ceiling waterfall on the far end of the room.)

I’ve not been to any of the other Yummy Houses. It’s possible that they are indeed worthy of their rewards. Perhaps what I experienced is a symptom of growing too large.

Whatever the cause, it made me miss Eastern Pearl.